Filmmakers have a lot in common with magicians. Besides a mutual background in vaudeville and common entertainment, for many filmmakers there is an emphasis on illusion. The history of cinema is a long story of technology and style seeking to dazzle one generation more than the one before. Audiences get savvy and need to be fooled by something else. Styles need to change to produce a new product and express a “modern” vision. Currently, the found footage style is an ironic continuation of the march of progress. By mimicking amateur video skills and technology, the found footage filmmaker seeks to make the film more real and accessible to an audience used to this kind of careless photography. This isn’t a new idea, of course, cinema verite inspired shaky handheld camera work for decades. Rough and unpracticed signify real, even if the fact is that it is as much an artifice as the most deliberate Hollywood blockbuster. Found footage also offers a great budget short cut for indie filmmakers, as it excuses them from the professional look that can eat up so much money. Found footage also can put the viewer directly into the film, as if playing a first-person video game, to also create a sense of reality from the images seen on the screen.

The creators of Act of Valor had their eyes on an additional sort of verisimilitude. Mike McCoy and Scott Waugh wanted to make a war movie after working with the Navy to create a training film. This access gave them the idea to use real SEALs instead of relying on actors to approximate the elite special operations force. Not as advisors, but as actual performers. The basic idea is not original, as R. Lee Ermey was a real marine drill sergeant before Full Metal Jacket gave him a new career. Kirk Douglas served in the Pacific Theater of WW 2, and don’t forget Audie Murphy played himself in the movie adaptation of his book To Hell and Back. 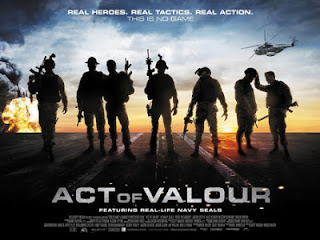 As tempting as it is to think that experience equals the ability to create a simulation of that experience, this is by no means an immutable law. Jean-Claude Van Damme was a good fighter, once upon a time, but that doesn’t mean his films are any better for it. There are many more examples. Oscars go to people that make movies that really affect people, it’s not an easy thing to do. Unfortunately, Act of Valor misses the outer ring of that target by a few yards. Nothing about this film would make you think it might get an Oscar, of course, but it isn’t even a very good action or war movie.

You don’t go to an action movie expecting great performances, but you also don’t want to cringe every time a character says something. The filmmakers must have known this, because most of the nuanced roles were given to real actors. Unfortunately, the film tries to develop the SEAL characters through dialogue they have to deliver. They try to act, but every line sounds hollow in delivery, something not helped by a script which hits every action movie cliche’ it can fit into the running time. Laughing is the automatic reaction to this dialogue, but it doesn’t feel right knowing what these guys really do for a living.

The film makes heavy use of DSLR cameras mounted on helmets, guns and other POV. At worst, this makes the film look too much like Call of Duty and pulled me out of the film. There are some cool shots of rifles sweeping through jungle or creeping toward an enemy base, but there are so many of these shots that it dilutes the effect. Firefights seen through this POV are confusing, which is probably realistic, but doesn’t help the story any. This trick was probably supposed to make it all more real, more immediate, but most of the time is just plays like a gimmick the audience is too smart to fall for.

If you can ignore the dialogue, story and lengthy portions where nothing happens, there are a few action set pieces that are well done and worth watching. A SEAL raid brings unexpected reinforcements, which becomes a lengthy chase through the jungle and river. This is a sample of what the filmmakers were trying for. Yet, even these blisteringly loud and chaotic gunfights feel a little too polished. You can feel the Navy recruitment team watching the film over your shoulder, making sure things don’t get too real.

The story is that the Navy required the SEALs to participate in making the film and that the filmmakers were required to hand over all of their rough footage so the Navy could use it in recruitment and training videos later. I doubt any of these people expected the results of the film to be so counter to what they would have wished for. Honoring dedicated solders of all stripes is certainly something to be respected, but making a film as empty and thoughtless as this strikes me as disrespectful. A wise director, whose name I have forgotten, said that war films can never really capture the experience of warfare, it can only present a mediated representation. Trying to create a realistic war movie is a fool’s errand, and McCoy and Waugh would’ve been better off spending more time creating an interesting story told well than to sell propaganda made poorly.

I am not sure when the cop buddy movie genre started, exactly, but it is one of the most parodied kinds of film there are. So much so that the earnest cop buddy genre has all but disappeared. One pleasure in watching this kind of film is discovering the ways various filmmakers enliven it. For better or worse, the “knight in shining armor” police officer is a thing of the distant past, and every modern police story is touched by noir, The French Connection or Serpico. Training Day was a great example of what the modern buddy movie has evolved into.

End of Watch is written and directed by David Ayer, the writer of Training Day. The film’s scope is similar to Training Day, it focuses on the daily activities of patrol cops Brian Taylor (Jake Gyllenhaal) and  Mike Zavala (Michael Pena) as they deal with an escalating turf war in their city. In some ways, this film is an update of Colors, though both Brian and Mike have more optimism for the neighborhood and people on their beat. As it becomes clear that a violent cartel is coming up from Mexico, these cops stand on tenuous common ground with the devil they know. 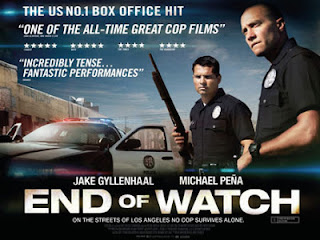 Mike and Brian are true believers, supporting each other’s faith in the thin blue line as it is tested by disillusioned comrades, superior federal agents and the many guns pointed in their direction. David Ayer’s film anticipates what the audience is expecting in a movie like this, and many plot points suggest  multiple plots we’ve seen before. Is Brian the ambitious cop who breaks ranks to chase down a criminal gang, at the risk of losing his career? Is Mike going to face a crisis of loyalty between his brothers in blue and his cultural roots? Will both of them lose their ideals as their faith is not rewarded by the system?

All of these things are suggested, but they are not the main thread of the story and this makes the film feel more “real” than the amateur documentary work shot by Brian that is woven into the film. All of these plot intimations may well be true, might have happened, but any future which might have been is lost in a blood-stained alley. We don’t know where their work may have lead, because their work is irreversibly ended. What is often a late second act scene of a regular buddy movie is the point where this film stops. The story doesn’t end, it is stopped, and this is handled deftly by David Ayers’ team.

As I said earlier, the camera gimmicks in this film mostly got in the way of the story. The perspective didn’t add much to the scenes, and often clashed with more polished filmmaking elsewhere. This isn’t really shot “documentary style”; this is a narrative film which incorporates verite formal elements. The Paranormal Activity films follow the same form, and no one would say they look like documentaries. Besides, the only footage that Brian shoots (as opposed to the vest cam he’s rigged up) is of him and Mike goofing around the station or in their squad. He’s not doing hard-nosed journalism. There are few moments when the POV is effective, one of these a brief but intense shoot-out captured by dash cam.

Jake Gyllenhaal does a lot of work bringing Brian to life. There is a sense of authenticity to him, and much of his backstory can be deduced by the subtleties of his performance. I knew he had been a marine long before this was mentioned in the film. Mike is strangely out of place, though. He’s played as an eager young cop, perhaps more green than Brian, and somehow less in touch with the citizens around them. There are moments where this becomes a point of plot, but it’s not a point made strong enough to explain why it’s so prevalent in the movie.

The movie’s best moments revolve around the cast of miscreants which make up the criminal world which surrounds Brian and Mike. Big Evil (Maurice Compte) is played with cruelty and contempt, a chaotic storm of violence which is out of the cop’s league. The rest of Big Evil’s barely controlled gang are drawn from life, could easily pass on many urban street corners as the real deal. A POV segment which concludes with a drive-by shooting shows how that technique can work, and how much character can be worked into one short scene. Too Tall (Zone) is a source of conflict and uneasy collaboration, an entertaining and particular take on a character type seen in other urban dramas.

Like many things, I don’t think a movie can ever really show what its like to be a cop in Los Angeles. A film can recreate moments that are remembered, can present impressions of situations experienced, but its sensory limitations and finite duration make it much closer to a passing dream. Reality in the realm of cinema is just a marketing term. A realistic film is one which summons authentic emotions in reaction to simulated human behavior. As much as End of Watch gets in its own way trying too hard to be real,  the strength of performances and storytelling make the merciless conclusion resolve as genuine emotion. Do we really want it to be any more real than that?