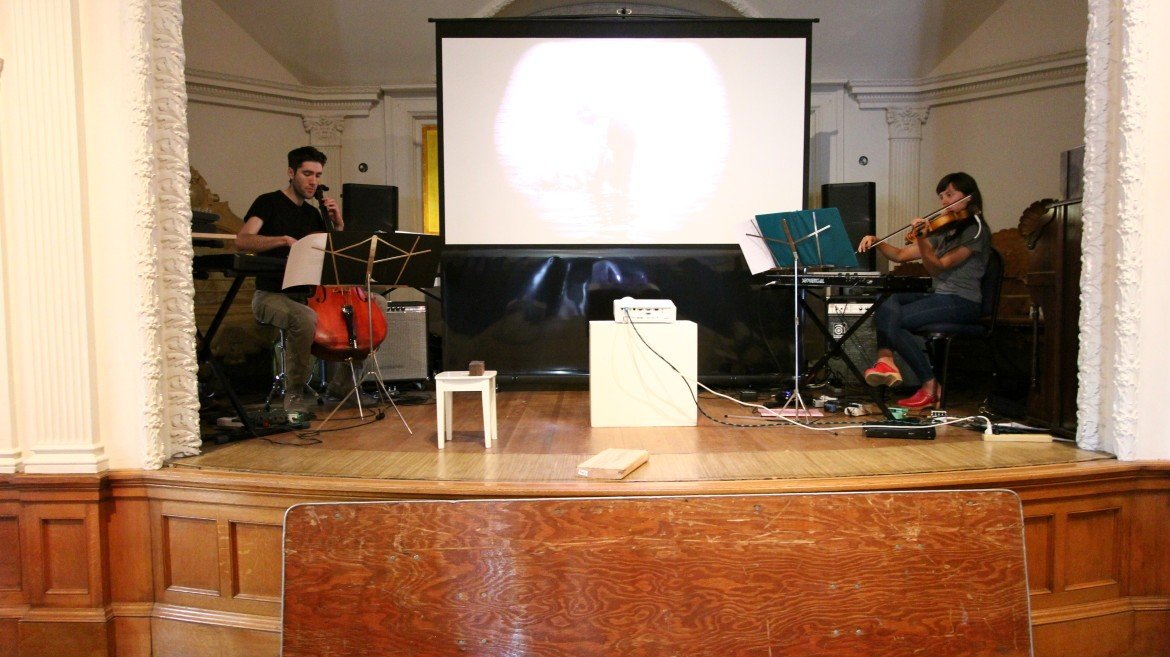 Jonathan Kaiser (JK): …We played music together for a long time, as a configuration for other people and as a duo and in bands and improvising. The scoring for silent films came from Jackie’s Brute Heart being commissioned for “The Cabinet of Dr. Caligari” for Walker Art Center Music and Movies. They invited me to join them for that. I’d worked on a couple film scores with Dark Dark Dark so I was in a certain mode of working in that kind of thing. So I and John Marks who plays synthesizer and electronics joined them for that. It was a really fun working experience and it was a great combination of five people working on the project. That was kind of the beginning of talking about film and music stuff and working together on film stuff.

CC: Were you invited by the American Swedish Institute to do this, or did you make a proposal to them?

JK: We sent them a proposal. Because it’s a Swedish film and their ballroom is such a great space. We thought it would be a fun, interesting match.

JB: They were totally open to it. It seems like there’s a good match. There’s an audience for it.

JK: We’re going to cover the skylights so it’s dark like a movie theater. Other than that it’ll be us, the movie, the music and the audience!

CC: How did you select Phantom Carriage? What about that film inspired you to do this?

JB: I’ve been really into the Swedish film genre for a long time. Have you ever seen Haxan? Andy McCormick [Dreamland Faces] told me about that film and ever since I saw it, I’ve been kind of obsessed with these dark Swedish films from that era. A friend of mine suggested I check out Phantom Carriage. I was just so struck by the imagery, there’s a lot of double exposure. It is really haunting. It’s more haunting than Haxan that has literal, like these witches and really over-the-top, ridiculous grotesque stuff, and this is way more haunting, ethereal and perfect for the kind of music I want to play. I just wanted to score it. I love the Swedish Institute so much! … I love the space, and knowing of these Swedish films, it went together. The fact we could do it at the Swedish Institute helped me pick a Swedish film – they have a video room.

JB: I’d say it’s similar. I think this time around we’re more aware of our process. We can each sit and write notation, bring it to the practice and try it. But we realize that we’re more inclined and drawn to improvising on stuff, and working collaborating on it, instead of notating it on our own and bringing it to the studio and have the other person play it. So it’s more of a collaborative process. Also we realize the music we’re doing is definitely tied to the film, but we’re not watching the film and necessarily composing the music to fit the film, but more composing the music, seeing how it naturally exists alongside the film.

JK: We’re not into doing the super-illustrative sound effects approach to scoring. Or trying to do a sonic illustration of what the characters doing or the action. It’s not a Woody Woodpecker approach to things. (They laugh). More of looking at the big picture of the film is, and the mood of large pieces of the film is, and looking at the overall structure of it, and almost independently of that, we’re improvising and making music. … There’s this back and forth.

JB: I think another element is, as string players, we’re constantly working with deconstructing classical training from like 20+ years of our life. Part of my idea of what I’m doing right now with the viola is not imposing this really emotive, traditional string part onto what we’re doing. With composing you can get more close to classical music. It’s trying to not necessarily take this traditional approach of “play this” and then “play this” to this character, but we’re taking this approach of, we’re playing stringed instruments, but we’re not playing them like stringed instruments in a film score.

JK: We’re just as likely to use our instruments to make soundscapes, as we are to make melodies and harmonies. We might try to make rasp sounds, or loops that sound like wind and rain, or something, as we are to try and write a pretty, harmonious, melodic progression. We’re trying to bring in both worlds, but our writing process is closer to rock or jazz or something that doesn’t rely on the written note because usually our best ideas come from improvising or playing by ear.

JK: Because it’s a 1920s film, we didn’t want people to assume we’re playing 1920s style music, which is music we love and admire. We do draw a lot of inspiration from composers of the early 20th and 19th century and earlier but we also are using synths and electronics in addition to stringed instruments and we’re doing things with our instruments, to make them not sound like stringed instruments all the time. It’s definitely a hybrid of the old and the new.

JK: That’s a cool thing about this film – it was using special effects in a really intentional and new way…. You see a lot of silent films that are like a stage play that happens to have been filmed. And this is really very much a cinema piece. There’s a lot of play with ghostly illusions and characters telling stories that are stories within stories and memories. It’s using film to tell a story in a pretty contemporary way. There’s a lot about it too that are awfully dated. We cringe at certain parts of it (they laugh) but that’s why, our goal of performing a new soundtrack to it, is picking out the parts of it that we think are really great and sort of downplay the parts of it that we’d rather ignore (laughs).

JB: Have a little synth part or cheesy strings for those. (Laughs)

JK: That’s part of why we’re not trying to sync up certain musical “Ta-da!” moments.

CC: Is there anything you’d like to add about Phantom Carriage specifically inspiring your composition?

JB: Jonathan and I have been moving toward incorporating synths for a long time. And using these weird analog synth sounds. I think this film with its creepiness and weird double exposure and just weird haunting quality allows us to experiment with that a little more. So I think it’s a perfect film for us to do these weird synthy soundscapey things with.

JK: Yeah, I think it’s more like we chose the film because it fits with the vibe we were already pursuing, rather than that it’s changed the type of music we’re making.