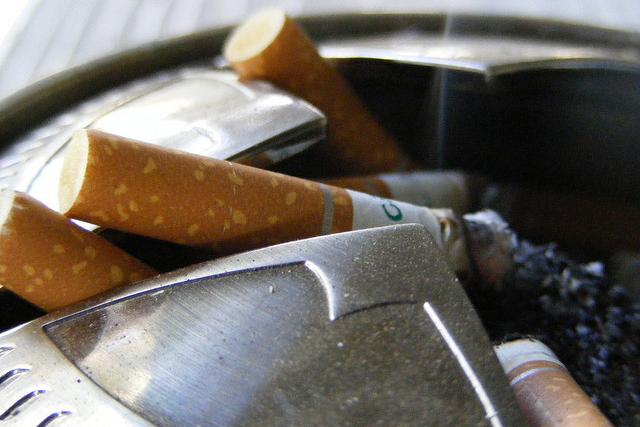 A lifestyle practice among American Indians around the state has resulted in a “public health crisis.” What is it?

The use of cigarettes, cigars, chewing tobacco, pipes and snuff, according to what’s described as the most comprehensive state-wide data in the country of the behaviors, attitudes and beliefs related to tobacco use among American Indians.

The Tribal Tobacco Use Project Survey, released to MinnPost, contains the responses of 3,000 American Indians 18 years and older on seven reservations in Minnesota and in urban Indian communities in Duluth and Hennepin and Ramsey counties. The project started in 2009. 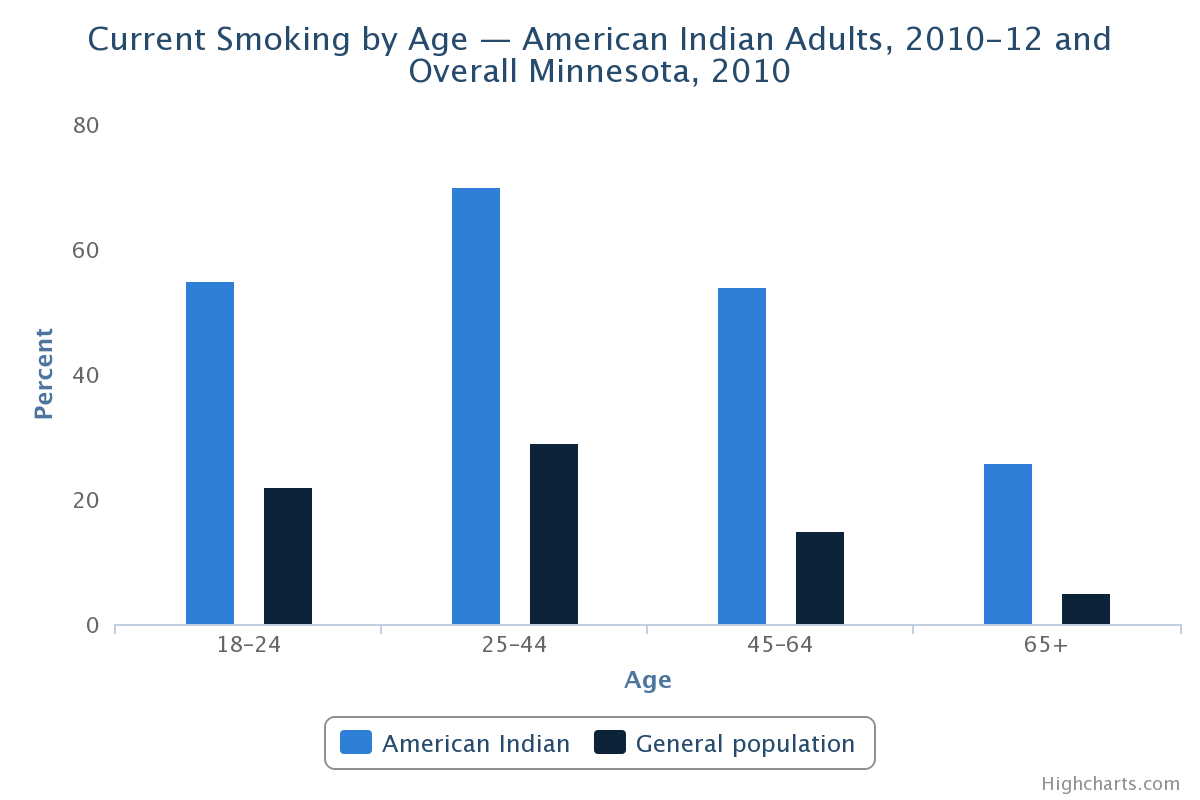 American Indians in all age groups smoked at a higher rate than the general population. (Source: Tribal Tobacco Use Project Survey)

Findings show much higher death rates of American Indians than the Minnesota population as a whole for smoking-related diseases. 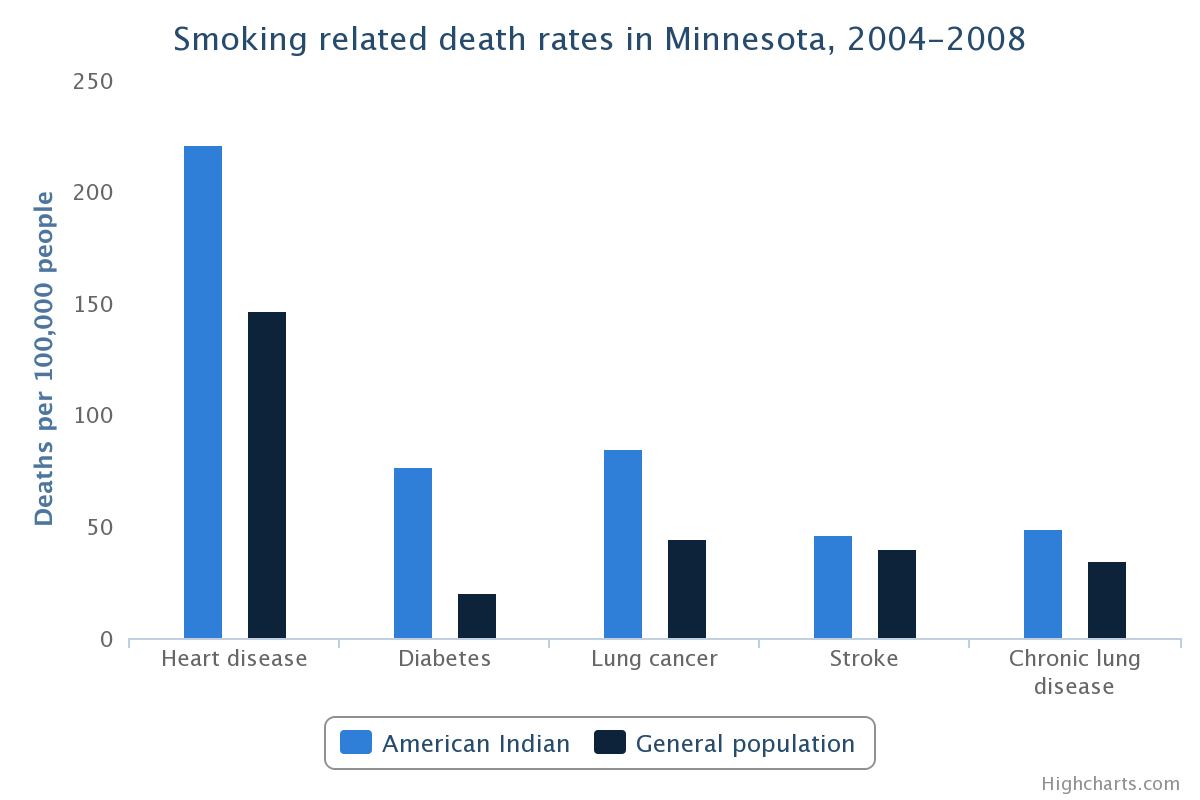 For instance, the heart disease rate is 1.5 times higher than the population as a whole, the diabetes rate three times higher and American Indian men in the survey have the highest rates of lung cancer in Minnesota.

“There is no question as to this gap. It’s huge, it’s a public health crisis,” said Jean Forster, who heads up the science part of the study, has a PhD and works for the School of Public Health at the University of Minnesota.

The 59 percent usage rate is “much higher” than anything reported here before, she told me, but she and others suggest the findings reflect a different survey approach.

Past standardized surveys were random and done by telephone. In this study American Indians were trained to do surveys face to face with their peers, a method thought to be more culturally acceptable to the group.

The study results from a collaborative partnership between the American Indian Community Tobacco Projects, the American Indian Policy Center in West St. Paul and an “oversight group” of American Indians from across the state. It is funded by ClearWay Minnesota, an independent, Minnesota non-profit organization working to improve the health of all by reducing tobacco use and exposure to secondhand smoke.

The study also acknowledges use of tobacco in sacred rituals but does not include those smokers in its smoking rates. Almost three-fourths of participants reported having used tobacco “for ceremonial prayer or in a sacred way.”

“It’s a matter of lifestyle, values and beliefs of the people,” and until now with these study results, its “debilitating health effect really hasn’t been a common conversation,’’ Poupart said.

That should change, given the involvement in the project of tribal leaders with this study, he said. Each participating tribe also received study results. Forster is helping spread the results of the study to public health and science communities as well.

“I don’t tell anybody to stop smoking,’’ he said, because that is not respectful of Indian tradition.

In the Indian community, he said, “behavior is relational. You see and you do. If people around you are trying to quit and failing that sort of sets the tone that’s it’s OK to try and OK to fail.’’

Still, he sees signs of change. “It’s OK now to not smoke. People have come to disallow smoking in their homes and cars,’’ he said. There are more non-smoking areas on reservations. Some tribes encourage use of traditional red willow bark with other plants and bark for spiritual practices or Indian tobacco grown for the purpose and discourage use of commercial tobacco.

“As Jean says, this is a wake-up call to the tribal leaders,’’ Poupart said.

The numbers caught the attention, too, of state officials.

Jackie Dionne, director of American Indian Health for the Minnesota Department of Health and a former smoker, says the survey demonstrates that smoking-cessation strategies used so far simply are not working successfully in the American Indian community.

She said high smoking rates in American Indian, African-American and refugee populations are to be expected.

“Populations that have been highly traumatized historically and today, they have higher rates of depression and anxiety. When you have those one thing that alleviates, immediately, that feeling, is nicotine.’’ Drug and alcohol addiction are related to trauma as well, she said.

American Indians, noted Dionne, who is from the Turtle Mountain Chippewa tribe, have a documented history of trauma caused by the dominant culture, including being left to starve, being put into boarding schools and having their land taken from them.

There is a generational effect to that trauma, she said, lessening with each generation as people gain housing and jobs to care for their families and young adults learn good parenting skills.

Dionne says the state is about to launch an eight-month conversation with all concerned to determine better strategies for helping American Indians successfully break harmful smoking habits and realign State Health Improvement Program dollars to help in that effort.