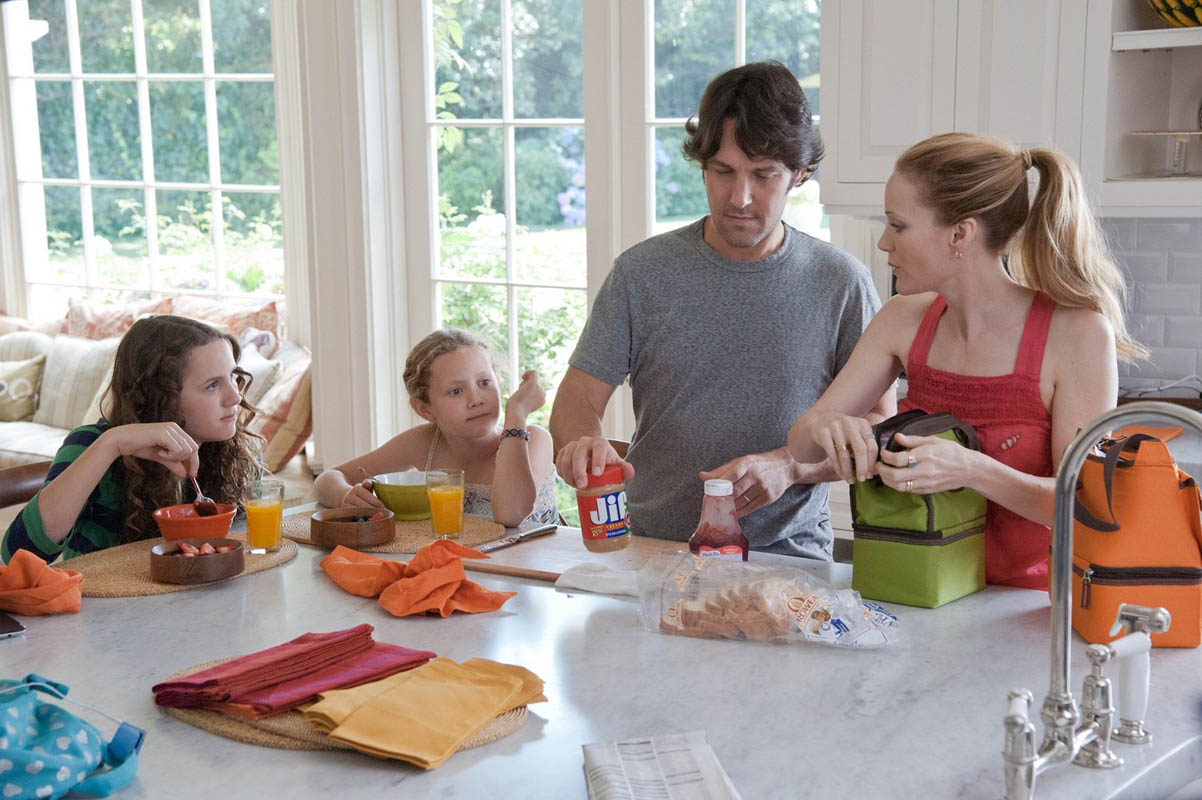 Director/writer/producer Judd Apatow returns to a familiar universe with his latest comedy-drama, This Is 40. Apatow revisits Pete (Paul Rudd) and Debbie (Leslie Mann), a married couple who were supporting characters in the 2007 accidental pregnancy flick, Knocked Up. This time around, Pete and Debbie get the full attention of the camera and the plot, as Apatow explores what it’s like to be a parent of two girls while entering the foreboding landscape of one’s forties. This first directorial and writing effort of Apatow’s since 2009’s Funny People is mostly relevant, occasionally aimless, and always entertaining.

Pete and Debbie are turning 40 the same week. Pete is unconcerned about the big 4-0. He’s worried about his struggling small business, Unfiltered Records, as opposed to dwelling on the inevitable aging process. Debbie is taking it harder. She wants nothing to do with any “over the hill” business. Heck, she wants to get off the hill entirely. And so she claims she is turning 38 instead of 40. She even makes the candles on her birthday cake agree with her delusion.

Facing the wrinkles of time isn’t the only problem for Pete and Debbie. They have two daughters, Sadie (Maude Apatow) and Charlotte (Iris Apatow), ages 13 and 8, respectively, who present them with another complete set of challenges. Sadie, who is plunging into the chaotic depths of puberty, is an especially unpredictable attention grabber of her parents as she excessively plugs into the online world and rages against the shrinking betrayals of her wardrobe.

Raising children, keeping the bills paid, dealing with getting older. Yes, just like many of Apatow’s previous projects, This Is 40 strives to be funny while standing on realistic, relatable ground. And boy, this environment may be the most relatable yet, at least for middle-aged viewers. Because in addition to the aforementioned obstacles in Pete’s and Debbie’s lives, the duo also has to deal with a floundering marriage (the once passionate fire between them has been reduced to a pile of lukewarm ashes) and the rocky relationships with both of their fathers, Pete’s played by Albert Brooks and Debbie’s played by John Lithgow.

As you can tell, the world of Pete and Debbie isn’t the typical setting for a comedy. There are a lot of grim goings-on. But this is an Apatow movie, and the great thing about Apatow movies is they don’t sugarcoat the stories they tell. They put the humor of real life in neon-bright display, but they don’t leave the unfunny side of real life in the shadows; that gets its time in the spotlight, too. Apatow’s script for This Is 40 takes its time chewing the dramatic, sometimes painful moments of Pete and Debbie’s situation. Arguments with topics ranging from sex, love, and pregnancy to money loaning, guilt, and abandonment dominate the story. Although it’s not surprising to find heavy subjects being looked at in an Apatow flick, it’s still a little disconcerting to go see a movie that is marketed as a gut-busting comedy via trailers and posters, and then find out the majority of the runtime is draped in full-on drama, with enough crying and screaming to fill a tragic love story to the brim.

That’s not to say the drama of Pete and Debbie isn’t welcome, because it certainly is. Even though I didn’t laugh as much as I thought I would while watching a movie co-starring Paul Rudd, I ended up watching the heartbreaking scenes unfold with rapt attention. Apatow establishes a multitude of characters with their own conflicting agendas. He then creates a setting where his characters will surely interact with one another, such as a 40th birthday party, places them in that setting, and lets the dialogue flow and the tension build until somebody loses it and starts shouting. It’s a fascinating thing to watch, these discussions, probably because they’re so believable in their set-up and execution.

Not every moment is a captivating one, however. Apatow creates so many sub-plots and characters, that several of them are unnecessary to the progression of the master story of Pete and Debbie’s turmoil. Megan Fox is terrific as Desi, an employee at Debbie’s clothing store who is young and beautiful and is maybe stealing money from the store. But she could have been chopped from the story and the movie wouldn’t have suffered. The same thing can be said of Melissa McCarthy’s time onscreen as Catherine, an aggressive mother of a bully at Sadie’s school. Was it funny to watch McCarthy cuss at the camera in a fuming rant that takes place in the principal’s office? Yes. But would I have swapped McCarthy’s scenes for more exploration of the relationship between Debbie and her dad? Absolutely.

As good as Apatow’s writing is, it would be lifeless without a game cast to pull off his quick-talking wittiness, and he undoubtedly has one in this movie. Achieving the crucial task of creating a believable veteran married couple that bickers as much as they smooch, Rudd and Mann are downright stellar as the film’s focal point. They share a warped chemistry that allows them to nonchalantly swap insults, at one point going so far as to share how they would kill each other.

Brooks is a delightfully layered soul as Rudd’s dad; he’s deceptive, loving, and annoying all at the same time, making me switch between loving and hating his character until I realized the best thing to do was to sit back and simply enjoy watching Brooks work. Jason Segel reprises his role as Jason from Knocked Up. Though he only has enough screen time to categorize his role as a glorified cameo, Segel still adds a welcome dose of sly jokes to a film that carries a lot of dramatic weight.

This Is 40 isn’t Apatow’s best movie. It’s overburdened by too many storylines and as a result cannot come to satisfying conclusions with all of them. There’s a lot of funny and honest insights to be found here, though, and the cast is superb at bringing the humor and the horror of getting older to brilliant, glaring light. If you like Apatow’s brand of humor, traditionally served with heaping sides of real-life conflicts, then you’ll love This Is 40. But if you like your comedy soaked in slapstick, you should sit this one out—on your couch with a bowl of popcorn in your lap and an episode of Reno 911! on the tube, of course.