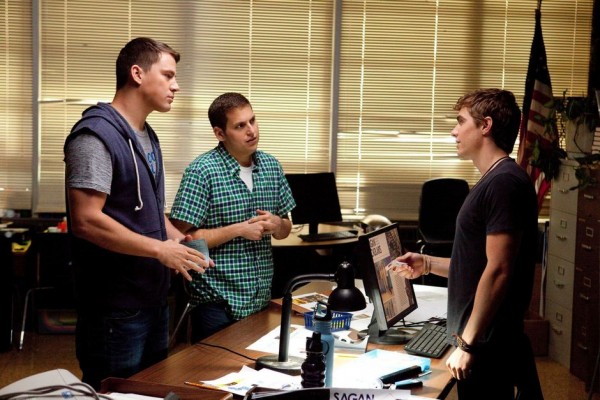 Schmidt (Jonah Hill) did not have fun in high school. He was short, he had braces, and he was bullied. One of his bullies was Jenko (Channing Tatum), a tall, muscular guy with shoulder length hair. Jenko laughs at Schmidt when he’s rejected as a prom date. Jenko’s smile fades minutes later when he finds out he can’t go to the big dance because his grades are horrible. Both of them sulk in their common problem.

Seven years later, Schmidt and Jenko have something else in common: police academy. Both of them are looking to earn their blue uniforms so they can participate in car chases and shootouts on the streets. They even befriend each other to improve their chances of graduating. Graduate they do, but they find that bike patrol in the park does not sate their appetites for explosive action.

After botching their first arrest, Schmidt and Jenko are sent to 21 Jump Street, the headquarters for a squad of young-looking cops who immerse themselves in local high schools to stop crime among minors. Schmidt and Jenko are ushered into a school with fake identities under strict orders to find the dealer of a new synthetic drug that is killing its users. A literal chance to re-live high school ensues.

One of the biggest surprises of 21 Jump Street is the effortless chemistry between Hill and Tatum. In their case, opposites attract. Hill is wide-eyed with his head on a swivel, constantly on the verge of a panic attack. Tatum, on the other hand, has his lids half-closed and wields the confidence to believe he can do anything, even the things he shouldn’t do. Together they make a fun duo. In many scenes they argue back and forth like brothers who can never agree. For instance, when Schmidt and Jenko go to their first day of high school, Jenko insists that Schmidt follow his lead and use only one backpack strap instead of two. Schmidt tries Jenko’s method but then worriedly debates whether it’s okay to only use one strap because all of the other kids are using both straps. Friction that is created between the two buds from trivial issues like this backpack fiasco is a recurring theme in the movie, and it doesn’t get old.

The supporting cast is filled with memorable characters that do more than just set up jokes for Hill and Tatum to slam-dunk. Ice Cube plays the role of angry, grizzled Captain Dickson, the head of the 21 Jump Street program. Dickson embraces the stereotypical ticked off police captain role. He even tells the people under his command that he’s aware he is a walking, talking cliché. The real laughs with Dickson come from his tendency to yell at people all the time. He even curses out Schmidt for praying to a statue of a Korean Jesus. “He’s too busy with Korean s***!” Dickson screams.

In the school halls, Schmidt and Jenko meet some interesting people. Brie Larson, of recent acclaim for her role as Woody Harrelson’s daughter in Rampart, plays Molly Tracey, a drama classmate of Schmidt’s. As the leading lady and romantic interest, Tracey is refreshing because instead of catching your eye by being risqué and overtly underdressed, Tracey makes you remember her because she is sweet and fun to listen to.

Just one of several funny teachers, Rob Riggle is Mr. Walters, an aggressive track-and-field coach. Riggle is given a long leash in this movie to be as loud, politically incorrect, and unpredictable as possible. When Walters shares scenes with Schmidt and Jenko, a palpable and awkward tension arises because Walters butts heads with Schmidt but seems to have a crush on Jenko.

While the people that inhabit 21 Jump Street are fun to follow, the action scenes are not. When Schmidt and Jenko became cops, they fantasized about being a part of high-octane action sequences, much like Nick Frost did in 2007’s Hot Fuzz. The execution of action scenes in Hot Fuzz, however, is loads better than in this picture. Car chases, gunfights, and hand-to-hand combat scenes are lazily edited, repetitive, and boring. I never felt like Schmidt and Jenko were in danger, I was rarely in suspense, and I had my hopes set on some epic showdown that turned out to be a pipedream. By the way screenwriters Michael Bacall and Jonah Hill sprinkled in Bad Boys-type trash talking and hints to previous action films throughout the movie, I expected them to follow through with an impressive climax. The inability by Bacall and Hill to include satisfying action for viewers is similar to opening a Christmas present only to find nothing inside.

Oh well. The acting and writing in this film are still too clever to not be enjoyable. I give 21 Jump Street 4 out of 5 stars, or a B+.