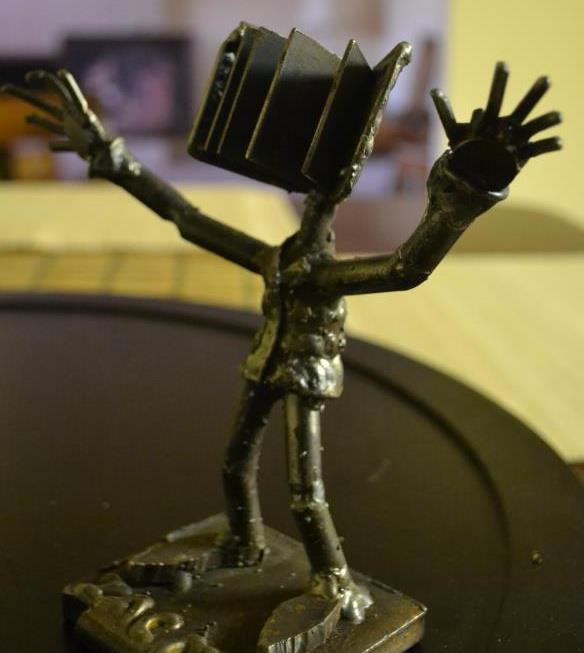 Growing up, I was always raised with the myth of Laos as a tranquil, serene land. A land of a thousand smiles, a realm of a million elephants, a lost Eden or Shangri-La. Which seemed at odds with the turbulent history of wars and occupation by so many different interests over the last 600 years. Lately, I’m thinking about this as I prepare to discuss my new book of horror poetry, DEMONSTRA, for the H.P. Lovecraft Film Festival in Los Angeles at the end of this month.

As a writer, I always preferred to go places where I didn’t think many others were going to go.

In the Lao culture, I run into many emerging writers who want to write childrens books or autobiographies of their family’s escape from Laos. Others want to write dramas about the differences between the old country and the new country, and the struggle of adapting to life in America. Knowing that, those topics became the sort of thing I don’t feel drawn to write, because I feel there are other writers who have that covered. But one of the big gaps in our artistic and cultural tradition I could see, ones that weren’t going to be extensively filled any time soon, were the subjects of horror and science fiction.

Of course, there were some thoughts that came immediately to mind: The Lao culture knows what fear is. What horror is. Man’s inhumanity to man wasn’t an abstract concept if you lived during the war from 1954 to 1975, or any part of the 20th century in Laos. Don’t we have enough ghosts? Yet, literature is one of those spaces where I think we could speak well on the subject, from a very unique perspective. It seemed wrong not to address the possibilities. So I wrote.

Now, years later, 2013 looks to be a big one for Lao American horror.

Saymoukda Vongsay is about to premiere her first full-length production Kung Fu Zombies vs. Cannibals at the Southern Theater on October 12th, the same night as the Zombie Pub Crawl. If there was ever a play to catch on opening night, this is it.

I encourage our community to support her because to my knowledge, this is the first full-length professional production of a Lao Minnesotan’s play since the beginning of the Lao Diaspora in the mid-1970s. I find it particularly refreshing because her work is original material. Kung Fu Zombies vs. Cannibals is not adapted from pre-existing sources. It’s not retelling a classic folk tale or the presentation of a dubious re-imagining of a Puccini opera that perpetuates offensive stereotypes of Asian cultures.

In time, will Kung Fu Zombies vs. Cannibals be held in the same regard as plays such as The Tempest, Rhinoceros, or Waiting for Godot? Will it break ground like Karel Capek’s R.U.R.. (Rossum´s Universal Robots) or War with the Newts? It’s hard to say. But this is a world that has propelled stories like Cats and Wicked to phenomenal success and touched audiences worldwide, so anything is possible. I think her play asks some intriguing questions.  Incorporating a hip-hop aesthetic, she’s presenting a Lao American-centered perspective on surviving the apocalypse.

As I’ve noted elsewhere, Vongsay is taking on a number of very sensitive topics about what we preserve in the aftermath of our wars. I think audiences will find it compelling: For people who actually experienced a real-life version of Apocalypse Now, are they in fact better prepared for another end of “civilization”? Even as many others ask us to move on, what happens if we lose touch with an understanding of that experience?

I think a play like this is a vital part of a refugee community’s artistic tradition because it represents a point where we as a community are at last asking not just about our past, as most refugees are prone to contemplate in those first decades of diaspora, but our future. If a community cannot articulate a future for itself to navigate in, something sleeps inside of them. Or withers like that proverbial dream deferred.

Another figure making waves in Lao American horror this month is director Mattie Do.

Do holds the distinction of the first woman to be a film director in Laos, and she debuted with her ghost story Chanthaly. This month Chanthaly is having its US premiere at the internationally acclaimed Fantastic Fest in Texas. Hopefuly it won’t be long before it makes its way up to Minnesota and the rest of the United States. Fantastic Fest is billed as “the largest genre film festival in the U.S., specializing in horror, fantasy, sci-fi, action and just plain fantastic movies from all around the world.” The film festival has been host to the world premieres of films such as There Will Be Blood, Apocalypto, City of Ember, and Zombieland. It’s an exceptional venue for her to bring Lao film forward. This month, she was also the first Lao woman to be interviewed in Fangoria magazine, one of the leading horror publications in the world.

I look forward to the next productions Mattie Do brings forward, and hopefully it will continue to help us set new standards for what Lao consider our visual vocabulary for the horrific. This is an area of Lao arts and culture that had, until very recently, remained mostly an oral tradition, one that few outside of Laos have been privy to. You can get hints of Lao sensibilities in the arts from some of her neighbors in Southeast Asia, but it isn’t often you find a fully authentic Lao discussion or presentation.

Where will go from here as a community? That’s not set in stone, but for now, I hope we’ve suprised people, and opened their eyes to the many possibilities we have with our voices.