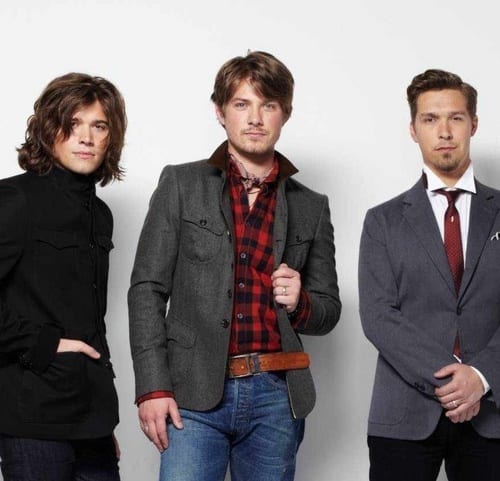 If you thought the band Hanson died out in 1999, you are in for a pleasant surprise (assuming you find this to be good news): The three doll-faced brothers are disproving that they’re merely a one-hit wonder with their smash hit “MMMBop”—a song meaning that still eludes fans. After 15 years, Hanson continues playing to sold-out crowds around the world. Why is that? Well, their albums boast catchy choruses and upbeat rhythms that’ll make anyone dance. Listen to their last four “grown-up” albums and you’ll find a good reason to remove them from your “awkward party music” playlist.

Hanson are fully aware of their role in popular culture as the cheesy boy band from the 90s, but that doesn’t seem to stop them. Whether you’re a dedicated fan of 15-plus years or a lover of irony, check out their show at First Avenue on October 2. I chatted with Zac Hanson, youngest member and notorious jokester, on the phone before the band’s show in San Francisco.

This won’t be your first time in Minneapolis; what are your favorite things to do here?
We’ve never really had a chance to spend time in the city! Obviously, we’ve been there many times, but the deal is, we show up for a show, play the show, and have no time to experience the city.

That’s too bad! Well, one thing you should know about Minneapolis is that we love our music. What bands are you listening to right now?
Oh, gosh. What am I listening to? Typically, the artists I’m listening to are the ones on tour with us. Right now we’ve got a guy named Charlie Mars and a woman, Meiko. They’re both really great.

Your album Shout It Out is now over a year old, so what can we expect for your show in October?
That was an album we loved having to play, but for this tour, fans can vote on [our website] for the album they want to be played in its entirety. I think that makes the tour unique. They can vote on 1 of 3 different albums, and we play every song on that album.

Where’d that idea come from?
What inspired this was when we did “5 for 5” in New York. We played five consecutive nights, an album a night. This put our album in a live setting, like a live album. It was a really good time to look back on those past albums. Next year, we’ll have been a band for 20 years, and we thought, “How will we do this on a tour? Let’s see. We’d have 200 shows! Hmmm….” We decided, “Let’s let people vote.” It really makes each show unique. The album is the centerpiece of the show, but we play others. The fans will definitely recognize their favorites. It keeps us fresh and makes our shows challenging. And the audience has more sense of ownership [of our music].

So how many shows have you done with this concept?
[laughing] Three. But it’s been a different album every night, which was really surprising! We had ideas about which one they’d choose. They all have a different feel. It’s more work than we thought; there’s no going through the motions.

The question that’s on everyone’s mind: How did you end up in a Katy Perry music video with Kenny G?
[laughing] It’s as random as it sounds. We went out to LA to do some press for the record, and we got a call asking if we’d be available to make this video. [Laughing more] I think they wanted a combination of old and new. Us and Kenny G and a couple of guys from Glee.