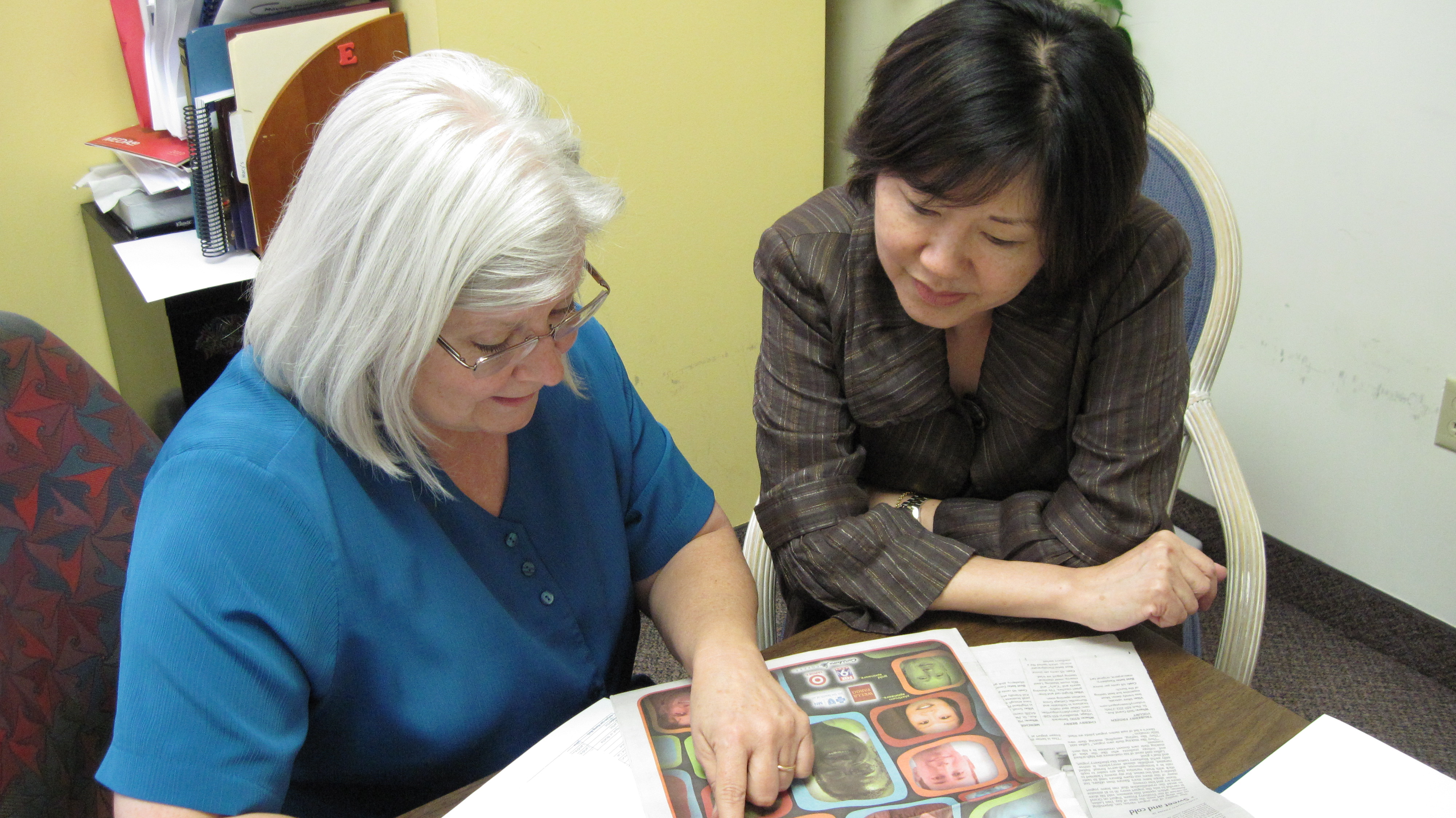 Yvonne Cheung Ho came to the United States from Hong Kong in 1972. “I had a sister in Minnesota at the time,” Cheung Ho recalled. “She told me about Minnesota. She told me everything. But the only thing she didn’t mention was the winter!” Cheung Ho laughs.Today, as President and CEO of the Metropolitan Economic Development Association (MEDA), Cheung Ho helps entrepreneurs of color, including immigrants, to succeed in Minnesota.

This spring, she was honored by St. Mary’s University of Minnesota with the Hendrickson Institute for Ethical Leadership award.

Getting a start in business

Cheung Ho came to Minnesota for higher education and graduated from the University of Minnesota with a major in business administration in December of 1975.

After graduation, Cheung Ho found a job at IBM. Later, she worked at Norwest Bank, which became Wells Fargo in 1998. However, when her son was born, Cheung Ho focused on caring for him.

“But I was still looking for things to do,” she said with a glint in her eyes, “an adventure.”

That’s when Cheung Ho tried her hand at some home-based businesses—including selling children’s wear, an import company, and jewelery sales.

“I wish I knew about MEDA back then!” she said.

Although Cheung Ho had mixed success with her home-based enterprises, she learned a lot about entrepreneurship and business management from these experiences.

In 1993, Cheung Ho found an opportunity to join MEDA and has been with the organization for the past 19 years. She has the distinction of being MEDA’s longest serving president. Her advice for people interested in starting a business?

“First, look for resources that can be there to help you. Don’t be an island because you aren’t. None of us are. Second, pick a business that you’re knowledgeable and passionate about — not a trend. Third, always have a business plan,” she advised, “But remember that a business plan is a living document. Don’t be afraid to change it when conditions change.”

Even MEDA itself has been expanding, changing, and evolving its “business plan” as a non-profit organization during these economic times.

“The client numbers for MEDA registrations this year are up 45 percent over last year, so we are scrambling to meet the demand,” said Jan Jordet, Director of Communications at MEDA, “That could be a sign of: 1) If there are less jobs — then you want to create a job by being an entrepreneur, or 2) If you’re a hard worker, then entrepreneurship is a good way to accumulate wealth. Ten percent of the population are entrepreneurs, but they hold 40 percent of assets.”

MEDA was recently awarded the contract to launch a Minority Business Development Agency (MBDA) Procurement Center pilot program in Washington, DC that specializes in connecting high capacity, minority-owned businesses with federal contract opportunities. Last year, MEDA was also awarded a contract funded by the U.S. Department of Commerce to provide a MBDA Business Center that assists companies in growth mode. During the first six months of operation, the MBDA Business Center helped clients in Minnesota secure over $13 million in contracts, obtain $3 million in financing, and create or retain 77 quality jobs.

“The reason MEDA has undertaken PTAC is because of Yvonne’s leadership,” said John Stout, one of the eight people who co-founded MEDA in 1971, “PTAC is a federal program that requires state matching funds. In 2003, when the state was not able to match the funds, Yvonne thought it was very important that MEDA step in where the state had stepped out. She had to convince the board to provide matching funds.”

The center helps businesses in Minnesota to navigate the process of obtaining federal, state, and local government contracts. Through the help of MN PTAC, Shantae Holmes, owner of All Washed Up Laundry Services, Inc. in North Minneapolis, won a five-year contract to provide laundry services for the Army. This one contract, worth $400,000, doubled her firm’s gross receipts in the first year. Last year, MN PTAC celebrated its twentieth anniversary by assisting businesses in securing 1,845 contracts totaling $503 million. Through these contract awards, MN PTAC helped create or sustain 10,053 Minnesota jobs.

“All of this is about helping to lift communities of color out of poverty,” Cheung Ho said, “I’m sure you’ve probably read about the unemployment gap. MEDA doesn’t want minorities to be left behind. A great way to narrow that gap is to help minority businesses because they tend to hire more people of color.”

Minnesota has some of the greatest racial disparities in the country when it comes to unemployment. According to a recent Economic Policy Institute study of 19 major metropolitan areas in the country, the Twin Cities metro area has the widest gap in unemployment rates between black and white residents. Last year, the jobless rate for African-Americans in the Twin Cities averaged 18 percent, more than three times that of white residents.

Salah Tarraf, founder and owner of Tarraf Construction, often hires minorities for the company’s projects. Tarraf, who was born in Senegal to a Lebanese father and a Colombian mother, started Tarraf Construction in 2001. In 2008, he earned a major contract and needed to borrow several hundred thousand dollars. However, the economy was so bad that it was difficult for him to obtain loans, despite his solid business history. MEDA helped Tarraf achieve the necessary financing to perform on the contract. With that money, Tarraf was able to hire another 20 people to work for him. Out of the 20 people that he hired, 14 were minorities.

“I’m a minority myself. I think it’s important to support other minorities,” Tarraf said, “I want to give back to my community.”

“Nurturing and growing entrepreneurs of color—that is the issue MEDA addresses. We serve businesses in a wide array of industries. While one of them is the retail industry, we also think it’s important to have minorities in construction, manufacturing, wholesale, and professional services etc.,” said Cheung Ho, “All these sectors help to provide quality jobs. We truly see a ripple effect in economic impact when we invest in entrepreneurs of color.”

According to the Kauffman Foundation, one of the world’s largest foundations devoted to entrepreneurship, more than half of all Silicon Valley startups are founded by immigrants. The Kauffman Foundation website states: “Minority entrepreneurs represent a largely untapped resource in the United States economy. Although the number of minority-owned businesses has grown significantly over the past twenty years, these firms continue to lag behind in economic indicators.”

Stout agrees, “MEDA is needed now more than ever. The importance of its mission hasn’t diminished in any shape or form. The community is diversifying at a rapid rate and the real growth of the community is diverse business. The community has a lot of work to do. This is not something that goes away. We have to work at it. It will always be important to work on inclusion as the community becomes increasingly diverse. Yvonne has been a fantastic leader. MEDA has always had a great group of CEO’s, but Yvonne ranks up there as the best. She’s provided a lot of strategic leadership.”

Outside of her work at MEDA, Cheung Ho participates in a young women’s art group program that brings together half a dozen young women who are at risk and exposes them to different cultural events, such as an outing at the Guthrie Theater.

“She’s always trying to create synergies that benefit everyone and that’s why she’s so powerful in the minority business community with every client and every business she meets,” said Jordet, one of the people who nominated Cheung Ho for the award, “With that keen focus she’s always connecting people. That’s what she really brings for our entrepreneurs, it’s access.”

Jordet, McCabe, and Stout all agree that Cheung Ho also operates from a place of humility.

“It was difficult to get her on the stage and have attention directed at her, instead of her clients,” Jordet said.

“It was a truly humbling experience,” Cheung Ho admitted.

Two people Cheung Ho acknowledged in her acceptance speech were her parents, who taught her to serve humanity with compassion.

“Despite their accomplishments as a public health administrator and a physician, they both stayed humble through their lives,” said Cheung Ho, “Their dedication to serving humanity and without asking for much in return had great influence in the development of my personal values and morals.”

According to Cheung Ho, ethical leadership is about empathy and treating people with respect, sensitivity, and honesty. It also means personal responsibility, accountability, transparency, and good stewardship.

In her speech, Cheung Ho said, “It is about building win-win collaborations that create synergy that creates results in greater impact than what one individual or one organization can do alone, and don’t worry about who takes the credit.”