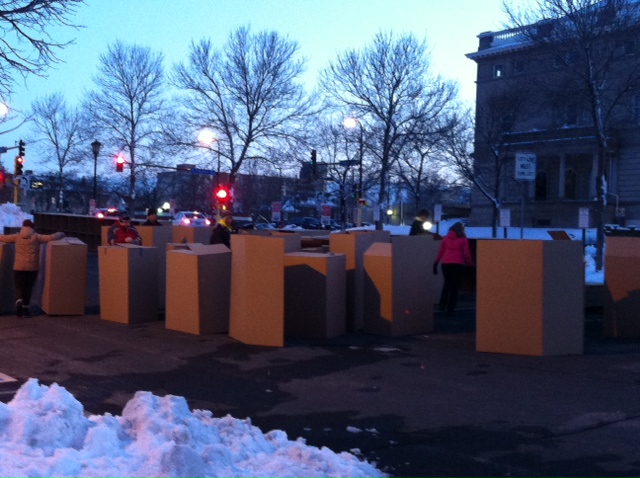 Thirteen-year-old Collin Robinson has a personal connection to homelessness. He and his mother were homeless when he was younger and he also has other family members dealing with homelessness. “My mother was a single mom at the time and we were bouncing around from place to place,” he said.

Robinson participated in the 9th Annual “A Night on the Street” event hosted by Plymouth Congregational Church (PCC) in Minneapolis, which reserved space in its parking lot for the event. Some 30 faith-based youth groups from across the metro area slept outside in cardboard boxes Friday, April 19 to raise awareness for homeless youth in Minnesota and to experience what homelessness might be like.

“The life of being homeless is something people take for granted,” Robinson said.

Shannon Kearns, youth leader from PCC, said that the focus of these events is shifting to advocacy. At PCC, this experience is a requirement for students who are in confirmation classes. “The issues of housing and advocacy are so aligned with Plymouth’s mission,” said Kearns. Students participate in advocacy efforts through their involvement with the Joint Religious Legislative Coalition, direct service, and even sending post cards and emails to elected officials.

The teenagers are also helping to support the Homeless Youth Act sponsored by Rep. Laurie Halvorson of Eagan. According to Eagan Patch, “the proposed bill would appropriate $8 million over the next biennium for the fight against homelessness among Minnesota youth. The money, which would be taken from the state’s general fund, could be used to assist homeless youth in obtaining food, medical care, counseling, education, training and a variety of other services.”

“Housing advocates urge $8 million to fund the Act, up from current fund of $239,000, or about 13 cents per homeless youth in Minnesota per night,” according to the “A Night on the Street” press release. A 2009 Wilder Foundation study estimated that in Minnesota 2,500 youth are homeless on any given night.

Teens were encouraged to use social media to ask lawmakers to support the Homeless Youth Act. A booth was set up at the event where they could be pictured with signs to promote advocacy everywhere.

Although $8 million is the goal of the Homeless Youth Act, Lee Blons, Executive Director of Beacon Interfaith Housing Collaborative, which organized the event, said that the governor is committed to passing a bill that would provide funds of $3-5 million. Beacon Interfaith is a nonprofit organization that owns and operates Nicollet Square, a housing complex offering housing to 42 young adults—they are chronically homeless or have exited the foster system and could become homelessness. The organization has plans for two more youth housing developments.

The event was filled with team building activities and opportunities to learn from youth and young adults who have experienced homelessness. “We wanted to make sure participants were meeting young people who are homeless…it’s not just a slumber party. This is real and they should be aware of what’s happened that caused [people] to be homeless,” said Blons.

Christine Spiritwolf (pictured below on left) brought Robinson (far right) and Miko Dyar (middle) to the event this year from Horizons Youth Program at Sabathani Community Center. Twelve-year-old Miko Dyar thought it would be a great event with a great cause. “Everyone deserves a great, loving home,” she said. 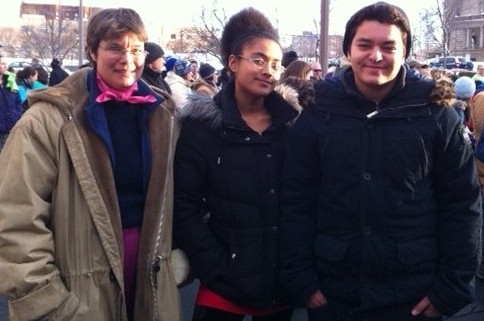 Dyar plans to stay involved even after the event because “youth are the future. We’ll be the next generation to make something happen. So I want to donate and give back to the community for the cause,” she said.