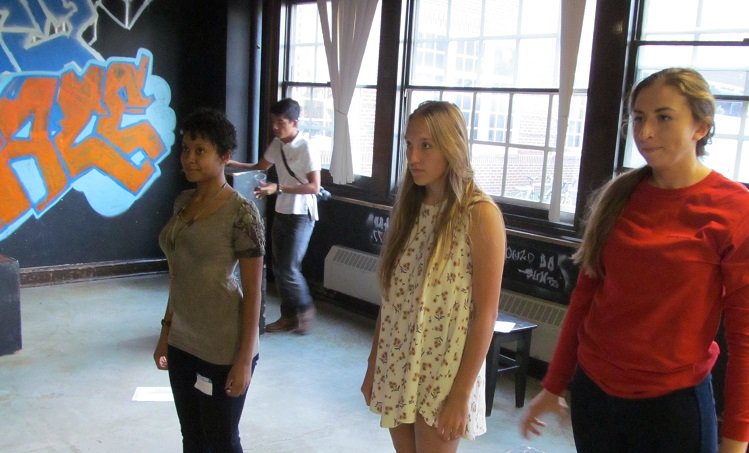 Eshay Brantley didn’t know what to expect walking into the Theatre I class at Washburn High School in Minneapolis. But, having felt as though she hadn’t found her niche in school yet, she went in with an open mind.

Two years later, Brantley’s a senior, and identifies as a spoken word artist and has competed in the spoken word competition Brave New Voices through Tru Art Speaks, performed at locations including Macalester College, and received an award for her role as a youth educator at the Twin Cities Social Justice Education Fair.

“We save lives here every single day, just by having students get on stage and actually speak from their heart,” Brantley said.

Theatre I is just one of five classes now being taught at Washburn through their Black Box Acting Program. The series, which started in 2008, provides three levels of theater classes, as well as a spoken word class and one aimed at students with developmental disabilities. The program is meant to help students further explore social justice issues, and teach them skills to help them better advocate their needs and beliefs.

Brantley said she came from a family that didn’t talk about social justice issues, so the theater classes provided her with an outlet to explore social issues like marginalized communities and systematic oppression. The classes also helped her figure out her role in those issues and within her community, she said.

Brantley’s experience with the program is not an anomaly. Spring said that while some students sign up because they have older siblings or friends who have taken the class, others receive the class as part of their schedule. “They don’t really know what to expect and it ends up being a good fit, or not,” she said.

The Black Box Acting Program is modeled after a similar program from St. Paul Central High School, said program founder Crystal Spring. Through the program, students look at social issues early on, she said, and focus on issues they witness within their personal lives, their communities or around the world.

“I think most protests and movements in the world have started with students and with young people, because they have the energy and they have that hope for things to be different,” said Spring. “I think it is just a very natural fit and when you give kids the space and the platform and the opportunity, it’s not hard for them to figure out what is frustrating or what isn’t right in the world or community. “

The social justice focus provides students with an outlet that they may not be receiving in other classes, Brantley said, and they have seen significant changes occurring in the Washburn demographics since they began there, specifically a growing homogeneity within the student body.

A 2008 initiative to improve the school was a focus on the International Baccalaureate program, Brantley said, which provides college level courses in high school for gifted students. While these advanced classes may have the intention of helping to close the current achievement gap, she said, they actually make things worse.

But Brantley said the lack of diversity isn’t about intelligence, but rather a lack of resources like internet access, and a lack of time. Brantley currently works 40 hours a week, she said, and can’t participate in more IB classes. And this has her feeling like she isn’t being provided the opportunity to fully prepare herself for college, she said.

Spring said Washburn’s previous principal worked hard to maintain classroom diversity before her time at Washburn ended. And while there is still intentional integration happening, she said, she can now walk down the halls and see classes with all one type of student. “It worries me. I understand that things are going to change, but I don’t think that’s who Washburn is, necessarily. That’s not the Washburn I know,” said Spring.

The diversity of the Black Box Acting Program’s classes provides students a break from those stresses, said senior Myles Kuchar, a student in Theatre I this semester. Kuchar said the class has helped him realize the benefit of interacting with very different people. “It opened my eyes to a lot of people’s lives and how we all like different art forms,” he said. “It has made me more open minded.”

Senior Abdul Mohammed said the classes provide a safe space for students to talk about personal beliefs and feel comfortable expressing them.

“This class has taught me to stand up for myself and to talk about what I believe in and to express my views,” he said. “This is called a safe space because we talk about things that are deep.”

Each semester Spring said she applies for a $500 grant from the Washburn High School Foundation to fund the classes. This is added to all profits from the program’s ticket sales during performances, she said, and almost all of the money goes to hiring outside artists to come to class. “That’s kind of the text for the kids, to be able to see a living, breathing artist who does the work, and to get to learn dance, spoken word, playwriting, or acting.”

The program also receives support from organizations like Intermedia Arts and Pillsbury House Theatre for fieldtrips to performances.

“That’s the most important thing for me, getting the kids engaged in the community in that way and seeing themselves as a part of that community and not as something separate,” Spring said. “Because when they leave, they are the next generation of artists, so we need them to envision themselves in spaces like theaters and art spaces.”

Spring said she also likes to use class trips to show students what it would be like to study arts and social justice in a college setting.

Students are always welcome to come back and visit after they graduate, she said. “The black box is like a home, they can always come back to it and share and give and take what they need from that space and from me. I want to support them as much as I can every step of the way.”

Brantley said she plans on using what she has learned from Spring and the connections that she has made during her time with the program after she graduates. Her current plans are to study theater and social justice in order to develop a similar program at a school elsewhere, possibly Chicago.

“I want to do education so that I can come back and I can teach kids,” Brantley said. “I’m really passionate about history because I think that once you know your history, nobody can tell you anything about yourself. And that’s where a lot of your confidence comes from, is knowing yourself and knowing where you came from.”

When asked how the program is affected by its small amount of funding, Brantley said, “It’s not. That’s not going to stop us from reaching the end goal, which is informing youth about their power.”

This story was written by a Twin Cities Daily Planet intern for the TCDP college internship program, in partnership with HECUA.

Correction: A previous version of this story incorrectly attributed a quote to Crystal Spring. Brantley said, “I want to do education so that I can come back and I can teach kids.”