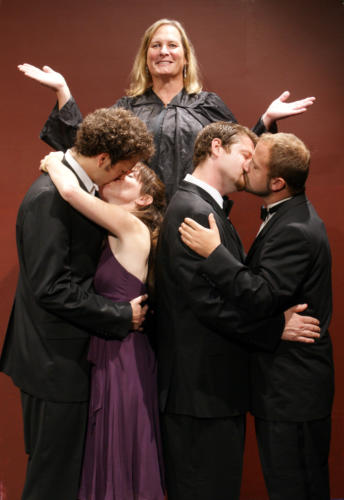 If you just want to see the list of theater offerings you should consider seeing the rest of this week and in the weeks to come, skip down to the line of asterisks (I’ll keep updating it as the days pass).  And if you want to try and escape politics for a while, check out this set of alternate theater listings.  If you want to know the reasons behind my suggestions, read on…

It’s strange how sanguine I’m feeling about the whole marriage amendment nonsense. Not confident, not by any means. Just ready. There’s going to be a vote. It’s coming. What are we doing in the meantime?

Part of the reason, of course, is that gay marriage is already illegal and unrecognized in Minnesota so…it’s not like if we manage to vote the amendment down, gay marriage will suddenly become legal, or we’ll recognize the gay marriages from other states. We already have laws on the books. They won’t change. There will still be 515-plus laws in Minnesota that treat gay and lesbian couples and their families different from other families. There will still be over 1,100 laws and benefits that married couples have access to from the federal government that will be out of reach of lesbian and gay people in committed relationships.

If the amendment passes, we get all this ridiculata inscribed in the state constitution, which will of course make it harder to undo, which is the point. Laws can be overturned by courts or the legislature. To undo an amendment to the constitution, we’d need to do this whole thing again in the opposite direction. I need to do more research because some people have even told me there would be a waiting period to hold a vote to remove the amendment, if such a campaign were launched. Someone also told me the vote to undo would need to clear a higher threshold than 51 percent of the vote. (Feel free to correct me, I’d love those two data points to be wrong.) Whatever way you look at it, the whole thing just calcifies if we put it in the state constitution, whether for a little or a long while.

Polls show the whole thing is really close, the people evenly split. Tensions run high, opposing opinions are bandied about in public with regularity, from letters to the editor to blogs to lawn signs.

Theater probably needs to take the credit (or blame) for me not freaking out more. Currently I have things I can do. I scripted a touring production for Project 515 that traveled around the state this spring, trying to put a human face on the issue of those 515 Minnesota laws. Right now, we’re in the home stretch of rehearsals of my play But Not For Love, which The Flower Shop Project and Workhouse Theatre teamed up to co-produce. There are characters in this play on both sides of the issue and they do battle it out, but at least everyone is talking to one another. There’s a double wedding and the possibility of a third romance blossoming. Laughter and a happy ending. My mom’s even flying in for the second weekend to see the show. Director Richard Jackson and our cast are so committed to telling this story, to digging into every little word of the text and mining out new information on the characters and plot that it’s breathtaking to watch sometimes.

But there’s so much theater going on right now dealing with this subject, I feel incredibly blessed to be in the middle of it all.

One last chance, on Monday 10/29 at 7pm at the Bryant Lake Bowl to catch the remount of the popular Fringe comedy Paul Bunyan Runs For President.  I quite enjoyed it (as well as the playwright’s previous Fringe offering Three Days In Hell), and anyone who can get me to laugh about politics these days is welcome indeed.  If you didn’t get a chance to see it the first time, or even if you did, it’s worth seeing.  Here’s my review from last time around.

Special event – readings on Sunday, October 28 and Monday, October 29 of Dustin Lance Black’s play 8, delving into the court battles over marriage equality and California’s Proposition 8, both fundraisers for Minnesotans United For All Families, fighting Minnesota’s marriage amendment on the November 6th ballot.  I blogged about the details here.

On the subject of voting—Appomattox at the Guthrie, spending Act One at the end of the Civil War in 1865, Act Two in the thick of the voting rights fight in 1965. Harry Groener in particular kicks butt as both Lincoln and LBJ, and Shawn Hamilton is positively spooky as Martin Luther King, Jr. Considering all the voter ID aka voter suppression aka “voter fraud” nonsense also going on this political season, recommended viewing. (through November  11, 2012)

Is it any wonder I’m not pulling my hair out, fretting as I wait for November 6th to arrive?  There’s too much to do.  So much to see.

There’s also something else I’m hearing, “You are not alone.”

Which is a nice thing to feel in an uncertain time.

See some theater. Lend what aid you can to a good cause. Talk to your friends and family. Get out there and vote.

And thanks, my extended theater family, for being as invested in this issue as you are.

Regardless of the outcome, the support is appreciated.

Freshwater Theater‘s compendium of short works around the subject, Better (or) Worse, which was on stage last month.

Also 10/3, John Munger and Third Rabbit Dance offers another edition of their monthly dance showcase The Rabbit Show at the Bryant Lake Bowl.  This month, women dancing with women, and men dancing with men in “Same Sex Duets.”

Fringe favorites Shanan Custer and Carolyn Pool of 2 Sugars Room for Cream fame are offering their talents to a fundraiser at the Ritz on Thursday, October 4th: 10 Reasons To Go, 1 Reason To Give. (And 2 Sugars runs again from October 11 to November 11 in New Century Theater in the Hennepin Theatre District in downtown Minneapolis.)

October 6 and 7, Bedlam Theatre is offered Making Amends—some theater and some useful information if you want to get out there and do something in the weeks that remain.

Another big event going on Friday, 10/12 was The Big Gay Comedy Show: I Do!, a fundraising evening of stand-up comedy from Lavender Magazine and Minnesotans United for All Families at the Parkway Theater.  The line-up includes my pals Courtney MacLean and the Dirty Curls, who were so much fun this Fringe with The Love Show. Big laughs for a good cause.  If I didn’t have my own opening night (above), I would have been there.  More info here.

Theatre Unbound‘s The Good Fight, a world premiere production of Anne Bertram’s latest play, about suffragettes who learn jujitsu in order to defend themselves in the fight for the right to vote.  That plays at the Lowry Lab through October 14th.  My five-star review of the production is posted.  You can read it here.  Short version, this play comes very highly recommended.

The latest offering from Thirst Theater, the No Round, popped up in a local restaurant for a good cause the first three Mondays in October.

Maximum Verbosity’s Phillip Andrew Bennett Low took a swing at the modern political system in Indefinite Articles: A Libertarian Rage on the night of the second Presidential debate.

My play But Not For Love has sadly closed its run on the stage at the Warren, Workhouse Theatre‘s home base, October 12 to 28.

We got a very nice review in the Star Tribune here

BOOM! Theater also weighs in on the subject of gay marriage with Gemma Irish’s new play Engaged, at the Cedar Riverside People’s Center, October 19 to 27.  And since it completely overlaps with my own play’s run and I’m going to miss it, I enumerated a number of reasons here why you definitely shouldn’t miss it.

The Illusion Theater is offering their own compendium of marriage-related shorts called Love and Marriage, running October 10 to October 27.

And to throw a little more politic theater on the pile, there’s also Gadfly Theatre‘s production of Mitzi’s Abortion: A Saint’s Guide to Late Term Politics and Medicine in America at the Lowry Lab, October 19 to 28.