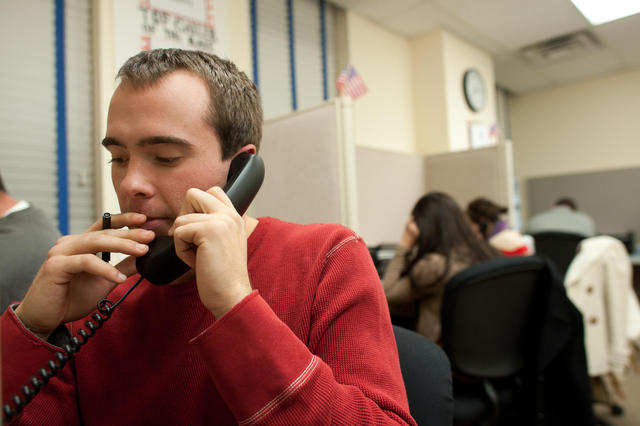 The office has been base for unsuccessful Republican Senate campaigns in the past. For the past two months, it’s been home for the Augsburg College senior.

Tuesday, Schwanke will take on Democratic-Farmer-Labor-nominee Kari Dziedzic in a special election to represent in the state Legislature the University of Minnesota area — typically a DFL stronghold.

The race for the special election began in late October, when Gov. Mark Dayton appointed Larry Pogemiller director of the Office of Higher Education after serving more than 30 years as state senator.

Schwanke has been campaigning with a core group of volunteers — mostly students — throughout the area. He’s out to convince voters in Senate District 59, which includes the University of Minnesota, that the time has come for a fresh voice in the district.

Originally from the small town of Lester Prairie, Minn., Schwanke didn’t grow up around politics. It wasn’t until he began at Augsburg that Schwanke became active in government, through attending meetings of the Augsburg College Conservatives and the College Republicans at the University of Minnesota.

Schwanke said his experience in rural towns combined with living in Minneapolis gives him a unique perspective on how local and state governments are run.

Like other candidates, Pogemiller’s departure left little time for Schwanke to decide whether or not to run.

For Schwanke, a mathematics and secondary education major, the decision was the result of a “snowball effect.”

“One volunteer thing led to the next, and when the seat opened I said, ‘You know what, I think I can do this,’” he said.

Although he’s spent the last two months campaigning, Schwanke said he doesn’t see state politics as a dream job. He’s studying to be a high school math teacher, which he said gives him an added perspective on Minnesota’s educational system.

The district includes northeast Minneapolis, the Cedar-Riverside neighborhood and the University of Minnesota, and it hasn’t had a Republican senator in office for decades.

While Schwanke understands that the odds are against him, he said he and his campaign team are staying positive.

He said he hopes constituents see that he is separate from the stereotypical Republican Party.

But Schwanke is running in a district that elected Larry Pogemiller with 78 percent of the vote in 2010. David Schultz, a political science professor at Hamline University, said the DFL primary in December virtually decided the election.

Schwanke was the only Republican to run.

“It’s definitely going to be a hard campaign to win,” Schwanke said. “It’s something that I realized getting into and it’s in the back of my mind now.”

Schwanke’s campaign treasurer, Barry Hickethier, ran against Pogemiller as a Republican in 2010.

Apart from helping with campaign filing and attracting donors, Hickethier said he’s given Schwanke some advice on campaigning.

“If a Republican’s going to have any chance in Minneapolis, you’re going to have to be practical and pragmatic about things — you can’t spout party platform. You have to show you’re willing to work a little bit,” Hickethier said.

Support from conservatives on campus

To help spread his campaign message in the district, Schwanke enlisted students from multiple colleges.

One of them is University sophomore Anna Wilson, the volunteer coordinator for the campaign.

Wilson joined Schwanke’s campaign after working with him at the state Capitol while they both interned for different legislators last summer.

She guessed that she spends more than 40 hours a week working with Schwanke through making phone calls and knocking on doors in the district.

“And he puts in much more than I do,” she said. “He has great ideas and knows how to carry them out. He has potential.”

Schwanke has also gained the support of the campus student groups.

Julie Collier, president of the University of Minnesota College Republicans, said Schwanke’s role in the race is important for students.

“The district covers multiple college campuses and [Schwanke’s victory] would bring a student’s perspective to the Legislature.”