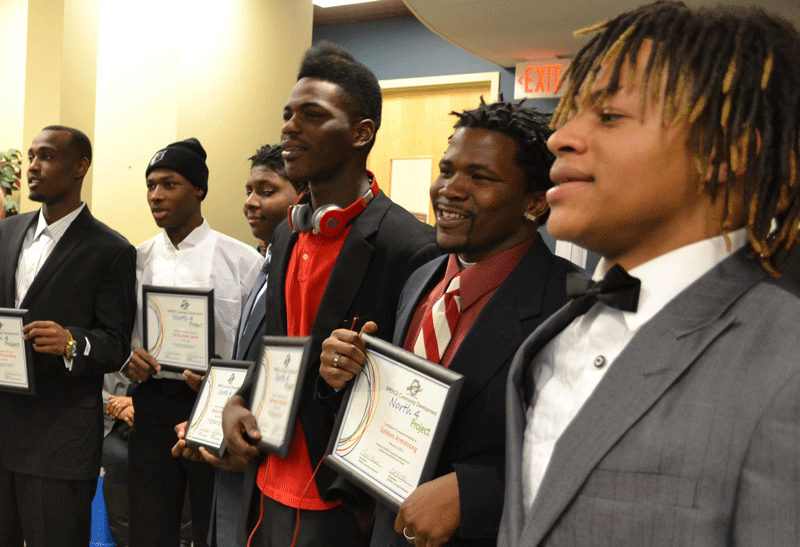 The North 4 participants with their completion certificates.

On Friday, February 6th, EMERGE celebrated the achievements of the most recent group to complete the North 4 program.  North 4 is a work readiness program for African American young men in four high crime neighborhoods in North Minneapolis. Young men ages 16 – 21 participate in a 16 week program that includes a week of orientation, weekly group sessions, regular one-on-one meetings with program staff, and a 240 hour paid internship. To complete the program and to be recognized at the February 6th banquet, participants needed to meet an 80% rate of participation, throughout. The 65 people who attended the banquet created a standing-room-only crowd that included family members, partners, internship supervisors, and EMERGE staff.

Several of the young men addressed the group themselves, sharing their experiences. According to one participant, Soldon, North 4 is the perfect program, “for someone who has been through a lot.” He recalled that he was forced to be a father figure at a young age for three young brothers. He said that North 4 allowed him to do many of the things that he never had a chance to do as a child.

Through his internship with Venture North Bike Shop, he learned not only to build a bike from scratch but about marketing and advertising. Soldon also mentioned empowerment training that EMERGE offers through the Northside Achievement Zone (NAZ), which is an integral component of the program. “Through that, I feel that I can do anything I need to do. You made me feel lovable, valuable, and important.”

At the celebration, a new recognition was awarded to one young man. Called the ‘Show Up and Show Out Award’, the recipient, Marcus, distinguished himself by being present for absolutely every meeting, event, outing, and work day over the 16 weeks. His attitude, according to Sterling Adams, North 4 Coordinator, was consistently “I’ll do what you need me to do.”

Marcus was joined by family and one of his teachers at the celebration. As he received the award he thanked them and others in the room. “To everyone connected with EMERGE who took the time to create this program, I thank you.”

EMERGE has already kicked off the next cohort of 10 young men joining the North 4 program and will be celebrating their accomplishments in June.

A special thank you to Houlihan Lokey for sponsoring and assisting in the planning of this recognition event for EMERGE youth.