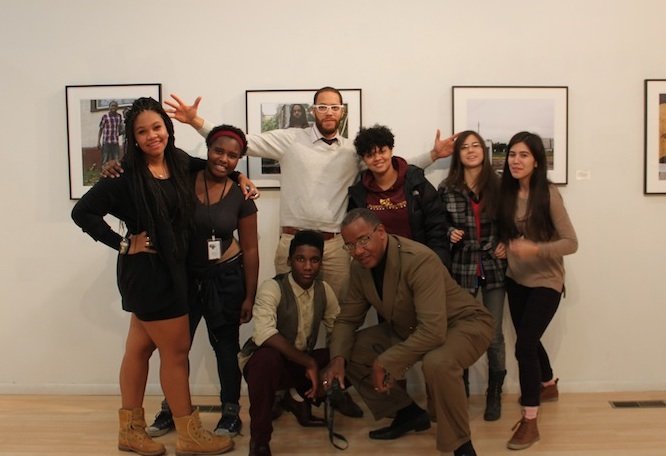 The magic of picture taking is the ability to tell people how beautiful they are through a photograph. This was the take-away message from Jamel Shabazz’s talk at Juxtaposition Arts this past Thursday. Jamel Shabazz is a photographer, lecturer and teacher of the visual arts from Brooklyn. This artist talk and reception was held in honor of the work of youth artists at Juxtaposition Arts as well as a part of One Minneapolis One Read, which invites residents in Minneapolis to partake in a city-wide read. This year’s book is A Choice of Weapons by Gordon Parks.

During Shabazz’s weeklong residency working with six youth artists, students’ photographs focused on the communities we live in and aimed to create prideful visual documents representing the beauty of these communities. In his talk, he emphasized the importance of pictures as a visual medicine to be uplifting and sending positive messages to viewers.

When students were asked what drew them into photography, Namir Fearce (15) said, “It’s a way to get someone’s energy – a memory, finger print, or a portal into who they are.”

Jahliah Holloman (17) spoke about how the residency helped her to be more observant and to look at what’s beyond the picture. “It opened up a new light to things I didn’t see before and be able to appreciate the little things more by capturing their essence and beauty.”

Students also spoke about their own personal transformations as they built up their own confidence and were encouraged in their photography.

It was also evident that the story of Gordon Parks in his autobiography A Choice of Weapons had a profound impact on the youth artists. Camila Merino (15) found it inspiring that Parks’ was able to raise awareness about issues in a non-violent way, especially through the arts saying, “You are able to photograph what’s going on in our communities and show different perspectives of what’s really happening.”

Parks’ story of overcoming his own struggles was motivational for the youth artists. “He was able to resurrect himself and be reborn. Moving out of survival and into living” said Namir Fearce.

The photographs taken by these students during Jamel Shabazz’s weeklong residency show that they were embodying these ideals. Each photograph tells the story of residents in North Minneapolis, and in a way that is prideful and captures their beauty. Their photography truly is truly transformative.

The youth artists’ photographs will be on display alongside those of Gordon Parks and Jamel Shabazz at Juxtaposition Arts (until December 1, 2013) and the Mill City Museum (June 8, 2014). Both exhibits are free and open to the public.