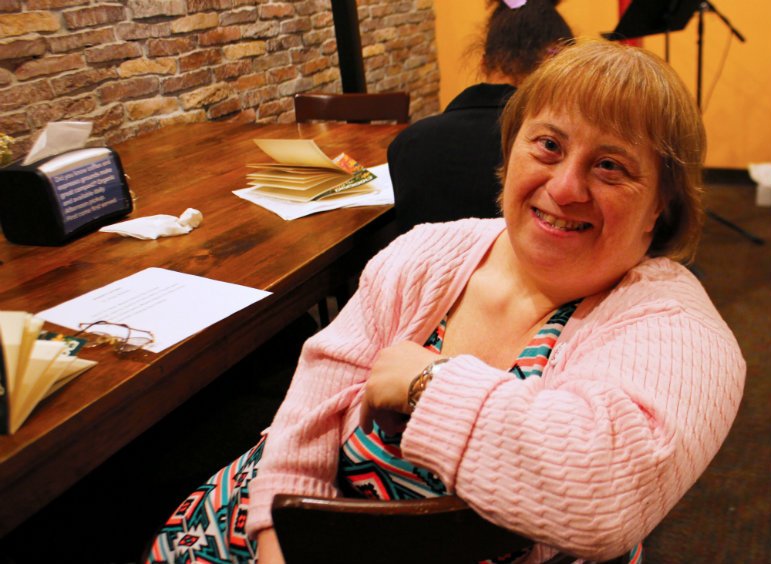 “I’ve been to California, Europe, Mexico, Sweden—all over the place. I’ve been everywhere,” he said.

Bergerson was a first-time poet, but a natural documentarian. Sometimes he grabs his camera and videotapes whatever’s happening in his life: sometimes it’s a thunderstorm, sometimes it’s the aftermath of a national tragedy, like the recent shooting in Orlando, Fla.

“We just live normal lives,” he said. “Just like you and me. We’re not different.”

Bergerson recently published some of his first poems with Cow Tipping Press, a nonprofit organization that exclusively works with and publishes developmentally disabled writers. Taking a class with Cow Tipping Press was the first time Bergerson had ever tried his hand at poetry–let alone read it aloud—which he did, at one of Cow Tipping Press’s public reading events. The reason he’d never done these things before was not, he said, because he didn’t think he could do them. He could. It was simply because until then, he hadn’t had an outlet.

“It was interesting—I kind of liked it,” he said. He’s not sure if he’d ever try it again, but he feels it’s important that he did it. He called poetry a “life-changing experience.”

“You think of things you’ve never thought of before, and you can speak your mind,” he said. 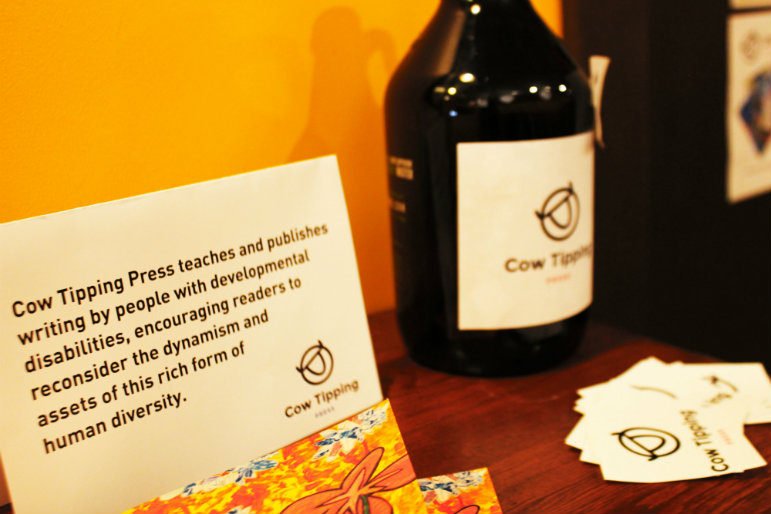 Cow Tipping Press is a relatively new organization, founded and headed up by Bryan Boyce. Boyce has been full-time at Cow Tipping Press for about five months now, but he’s held the idea of working with developmentally disabled writers in his mind for much longer. Boyce grew up with a brother with developmental disabilities. One day, when he was home from his studies at Cornell College, he proposed they write something together.

“I said, ‘You talk, and I’ll type,’” Boyce said, remembering. So his brother had talked, and Boyce had typed. By the time they’d finished, even Boyce had been surprised.

“What he came up with was different than anything I’ve ever seen,” he said. His brother’s sense of wordplay was sharp, and utterly original. These ideas had just been bouncing around in his head all the time, and until they’d sat down and written something, he hadn’t had the opportunity to share them.

That was enough for Boyce to take action. He got a grant to teach a writing class to the people in his brother’s group home network, and he published a book of their writing. Years later, after graduating and doing a stint in K-12 education, Boyce thought back on that collaboration. He’d had the privilege of growing up with his brother, and seeing firsthand his courage and the plasticity of his wordplay. Not everyone, he realized, had a chance like that.

“One in every 50 people [in the United States] have a disability,” he said. “But one in 50 of our interactions do not reflect that.”

He took that original collaboration and scaled it up. Now he trains college students to go into group homes and teach writing classes. When the writers have completed a body of work, Cow Tipping Press publishes a book of their stories, poems and essays, and holds a reading to share them with a wider audience.

At a June 9 event at The Coffee Shop NE, there were eight readers to present their written works from Cow Tipping Press’s latest published volume, “Future Drivers from the Future.” Brian Bergin, a program supervisor at Lifeworks Services in Brooklyn Park, was there that evening, too. Lifeworks, he said, had contracted with other creative services before, but this is the first time they’ve ever held a writing class.

“There’s not a lot available out there,” he said. The concept of art therapy is becoming more broadly accepted over time, he said, but in general, writing classes for developmentally disabled people are harder to find than theater, music or visual arts. 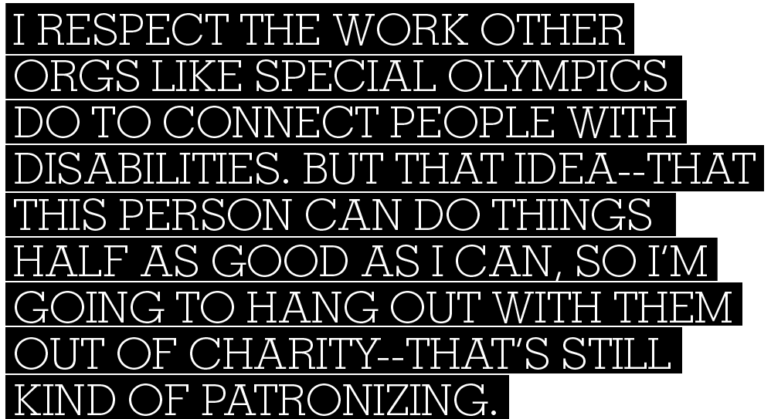 That means writers like Shinoa Makinen don’t always get the chance to show what they can do. At the reading, she mostly kept to herself, concentrating on her notes and her multiple revisions, but she had plenty to say about her influences when asked.

“My uncle is a songwriter. My aunt is a piano teacher. Most people don’t know that I can translate—some of them [the poems] can be translated into songs,” she said.

Makinen was a prolific writer well before she got published with Cow Tipping Press, but many other readers that night, like Dwayne Davis, had never written anything before. A huge crowd of friends and family turned out to see him perform that night, and Davis was all smiles. But one of his pieces, “Dwayne Move Out,” expresses a deep frustration with his circumstances:

One thing Cow Tipping Press can accomplish with writing that couldn’t be accomplished with art, theater or music is that their services are more available to the disabled community. The organization provides a platform for people with disabilities to share their ideas in their own words. Some of their clients, like Davis, have experiences that only they can communicate. Some of their clients, like Makinen, have gifts surpassing their non-disabled peers. With the written word, one doesn’t have to stand in the same room as Makinen or Davis to know that. It has something Boyce calls a “radical, self-representative character.” 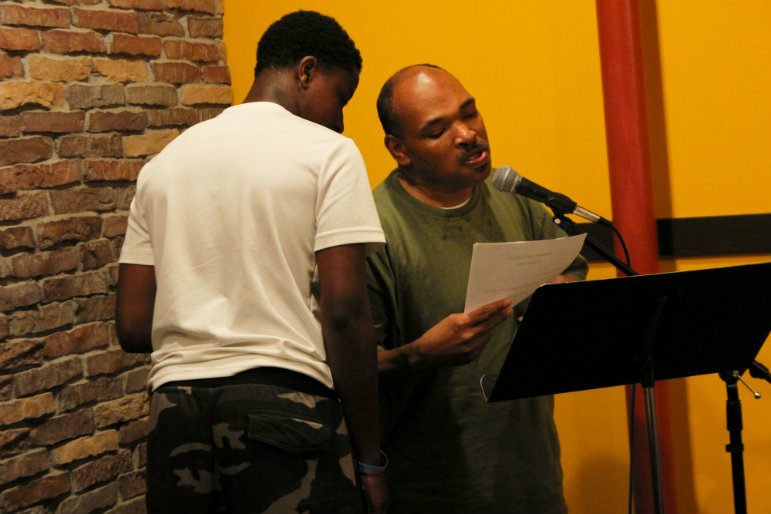 One of Dwayne Davis’ supporters whispers the words of the poem in his ear so he can recite it. Photo by Nikki Rykhus.

To explain, Boyce goes back to that “One in 50” figure. As seldom as non-disabled people interact with developmentally disabled people in everyday life, they pretty much never encounter them in the literary canon. They do, however, come into contact with Lenny from “Of Mice and Men” and Charlie from “Flowers for Algernon” – developmentally disabled characters written by non-disabled writers. Boyce explained why that was problematic in a forward from another Cow Tipping Press volume: “Hunger Would Be Creation.”

“No English teacher worth her salt would assign ‘Huckleberry Finn’ without unpacking and counterbalancing the problems of a white writer representing 19th century black American life,” he writes. “So why do so many of us grant a free pass to the cheap symbolism of ‘Of Mice and Men?’”

These books and readings are a small step toward the ultimate goal of Cow Tipping Press: to better educate non-disabled people on how to regard their developmentally disabled peers not just as people, but as equals, in every sense of the word. It’s not just about “helping” people who have disabilities. It’s about teaching people who don’t.

“I respect the work that other organizations like Special Olympics do to connect people with disabilities,” Boyce said. “But that idea—that this person can do things half as good as I can, so I’m going to hang out with them out of charity—that’s still kind of patronizing.”

The writers at Cow Tipping Press don’t need to be patronized. They need to be heard and understood. In the future, Boyce would love to see work from developmentally disabled writers taught in schools, alongside books like “Of Mice and Men.” In the short-term, possibly in the next year, he’s focusing on expanding his operation to 15 teachers and 150 students at any given time. He’d also like to expand their readership – maybe find that first third-party publisher.

In the meantime, writers at Cow Tipping Press like Bergerson have their names in print and reach an audience of about 1,500. While Bergerson isn’t sure if he’ll take to poetry again, he’s glad he had the opportunity to try it. Just like any other person, he’s living his life, making money, going on vacation, being creative and feeling good about himself—all on his own terms.