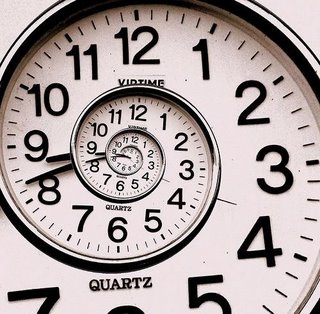 Several major news organizations sent out false reports yesterday in their haste to be the first to tell you something had happened.

But the thing they said had happened hadn’t happened, though perhaps it will soon or maybe by the time you read this, it already has. But yesterday, when they said it had, it hadn’t.

Getting a scoop has long been the goal of many a serious journalist. The bigger the story, the harder it is to get out in front of everyone else. So when the margin of victory is minutes or even seconds, it’s understandable that some of the top contenders might flinch, hoping that someday a sizable number of people will remember that their organization was the one to deliver the earliest news.

If people remember such things.

So now I have a news flash of my own. Time May Not Exist!

I’m pretty certain I’m the first one out with this story, because I just learned it from a Discover Magazine article that was printed in 2007. And in the article, they quoted a lot of smart people who were talking about time a long time ago, and the consensus seems to be that “a long time ago” doesn’t actually mean anything.

There’s more! The closer you look at time the more confusing it becomes and the less certain you are about everything. And so it seems like everything that has happened and will happen is accessible, with the right technology.

So I’m going to claim the scoop on this particular headline:

Scientists Have Just Conclusively Proven That Time Is Artificial And Everything Exists At Once!

Of course this hasn’t happened yet, but when it does, the explanation will further illuminate how “yet” is a meaningless concept. Details to follow.

I’m happy because journalism just got easier! It appears you can write any headline you like and simply wait for it to come true.