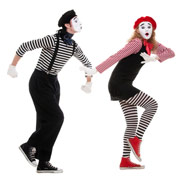 Last week, I started improv classes at HUGE Imrpov Theater in Minneapolis (yep ladies, I’m that cool: improv classes). The very first lesson we learned in class is to always say “yes and…” The idea here is that when you say “no” to your partner on stage, he or she won’t know what to say next and neither will you, silence and embarrassment will likely follow. Always keep the skit moving forward by being positive. Always keep moving forward.

The stretch from that class to our public policy challenges isn’t that hard. At our capitols in St. Paul and Washington D.C., we need more leaders dedicated to saying “yes and…” instead of “no no no.”

We had an important example of that recently after Governor Dayton announced his $775 million bonding bill that would put over 20,000 Minnesotans back to work and revitalize communities and infrastructure. Instead of saying “yes we need to create more jobs and here’s where we can work with you” conservative legislators’ initial response was no, no, no.

Senate Majority Leader David Senjem, R-Rochester, said in a statement that “Rather than using debt as a jobs plan, Minnesota would be much better served if the governor turned his attention to creating a positive tax and regulatory climate.” Let’s be absolutely clear here, Senator Senjem is saying “no” to a proven, job creation policy, arguing instead for a “trickle down” tax policy that has historically never actually created meaningful job growth.

Stretching my analogy a bit further allows for the pretty funny image of Governor Dayton on stage at an improv show with a few great opening lines and Senator Senjem coming on stage to stop the skit in its tracks. The less funny part of this, of course, is that the consequences isn’t a bored audience but more Minnesotans out of work.

As Tina Fey famously likes to say “The fun is always on the other side of a yes” and as it turns out, so are the jobs.