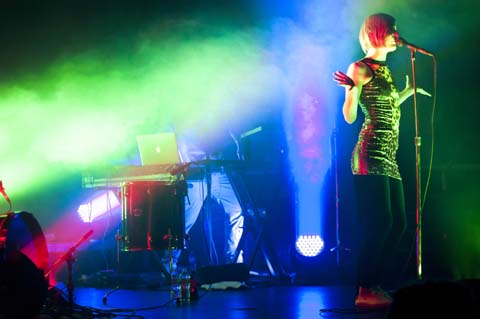 YELLE sold out First Avenue on Saturday night, but openers French Horn Rebellion behaved like they were responsible for the sellout.

In a world with band names like TV on the Radio, Panic! at the Disco, and Death Cab for Cutie, you sort of stop expecting monikers to actually mean anything, let alone to refer to their sound or character. But to my surprise, French Horn Rebellion actually incorporated a French horn, and it was definitely rebellious.

Brothers David and Robert Perlick-Molinari took over the stage like it was built for them. They wasted no time and got right to an relentlessly high-energy set of electro jams, with pounding club beats and references to both 80s (typical) and big band (atypical) music. As clouds of smoke poured from their set (comprising a keyboard, mixer, and not one but two MacBooks!), the dim but colorful lighting alternated from one rainbow hue to the next, which made the bros look as though they’d set up shop at some kind of impromptu frat house basement rave.

The two spent most of their set playfully trying to upstage one another, grandstanding for the crowd by doing such things like jumping off the stage into the photo pit, dancing on top of speakers, abandoning their instruments to prance across the stage showing off their “disco spin moves,” and at one point even engaging in a theatrical, staged duel where the weapons were a keyboard and a French horn (for the record, keyboard won). In the middle of the set, Robert (lead vocalist and sometime French horn player) implored of the crowd, “Want me to DJ?” The crowd roared, clapping along to the beat and waiting for him to work his magic. He took his place behind David’s keyboard and computer at which point he promptly stopped the music altogether, leaving the crowd giggling delightedly in the sudden silence. French Horn Rebellion had First Avenue in the palm of their hands.

Their set left the crowd in eager anticipation of headliners YELLE, and you could feel anxious excitement in the air. Impatient myself, I struck up a conversation with a security guard who looked out over the crowd and then turned to me, saying, “What I want to know is, when did it turn back into 1983?” He had a point: the packed dancefloor was populated with a higher-than-usual amount of neon and spandex.

After a short wait, drummer GrandMarnier and keyboardist Tepr took the stage and we eagerly awaited the final missing member, lead vocalist Yelle (yes, the frontwoman is Yelle but the whole band together is YELLE, apparently). When she finally emerged she did not disappoint, walking dramatically onto stage in some sort of burial-shroud-slash-raven-sheepdog hybrid costume. She swayed slowly and theatrically, which only served to rile the crowd up more—as anyone who knows YELLE knows that they aren’t necessarily known for being “dark.”

As the song built in intensity Yelle began to dance wildly, and eventually shed the animal cape to reveal a more expected glittery, gold, leopard print dress. “Good evening, Minneapolis!” she exclaimed, pronouncing it more like Minnea-police (which I don’t mention for the sake of making fun of her accent but only because it sounds way cooler, doesn’t it? Try saying it out loud).

The band then segued into a cover of Robyn’s ubiquitous “Who’s That Girl?” This, like all YELLE tunes, was sung in French, a fact that surprisingly doesn’t take away from the overall experience of their music, even for a non-French speaker like me (I actually had about an equally difficult time deciphering anything French Horn Rebellion sang, as can be the case with live music in this setting).

Yelle (lowercase) delivered song after song, such as their star-making hit “Je Veux Te Voir,” in her characteristic sweetly nasal voice. She looks exactly like you’d expect a French indie pop star to look like: tall, thin, willowy, and braless with half of her head shaved. Bathed in rainbow lighting and dancing around swinging (half of) her hair, she urged the crowd to dance along, to party, and to have a good time, and it was pretty apparent they were following her orders.

Though I’m willing to guess that most of us had no idea what she was singing about, the music as a whole was fun, upbeat, and just generally uplifting (which could also be said of the show as a whole, really). Visual cues like occasional crotch-grabbing and hand-over-the-heart gesturing led me to believe most of the songs were probably about sex and love.

After asking if we were ready to “shake it,” she ran off stage, only to remerge in what can only be described as a pink, leopard-print, Spandex hooded jumper, complete with pointy shoulder pads. After a few more tunes, YELLE thanked the crowd and left the stage for a few moments until it was apparent that no one was going to move an inch without an encore.

The played two more songs, closing with crowd favorite “À Cause des Garçons.” Rather than slow down into the final moments of the show, the band played a long instrumental outro during which Yelle begged us to “Jump! Jump! Jump!” They had us moving ‘til the last second, and by the time the final note had played, everyone around me was sweaty, danced-out, and already raving about how great the show was. All in all, YELLE was intense, and charming—worth catching if they come stateside again. 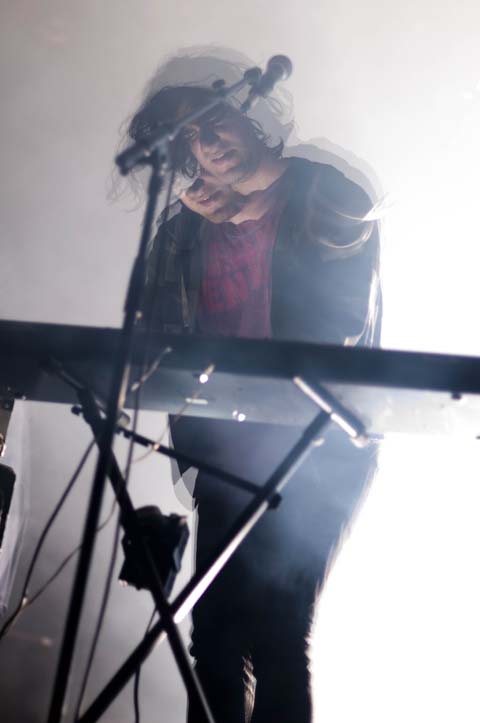 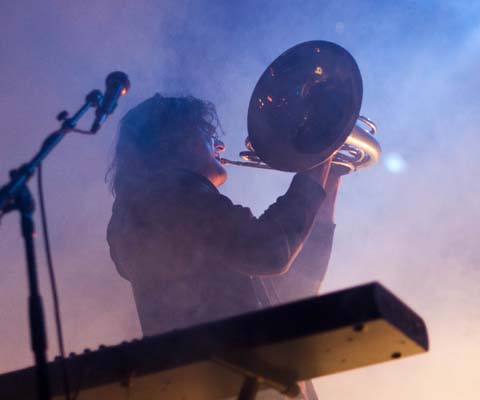 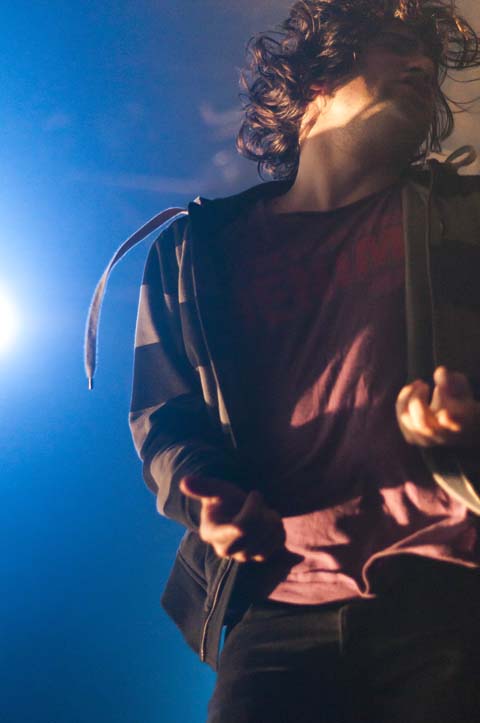 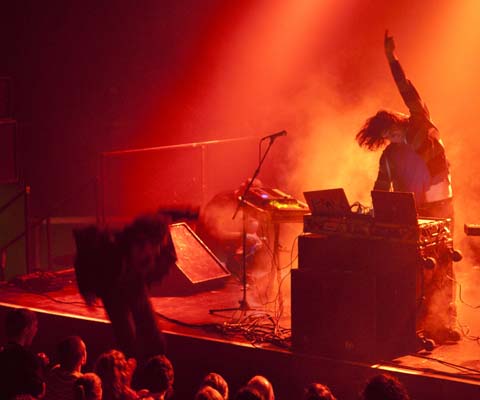 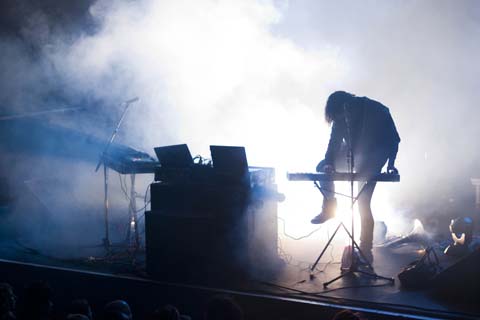 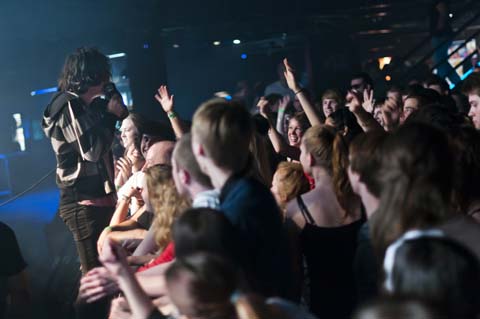 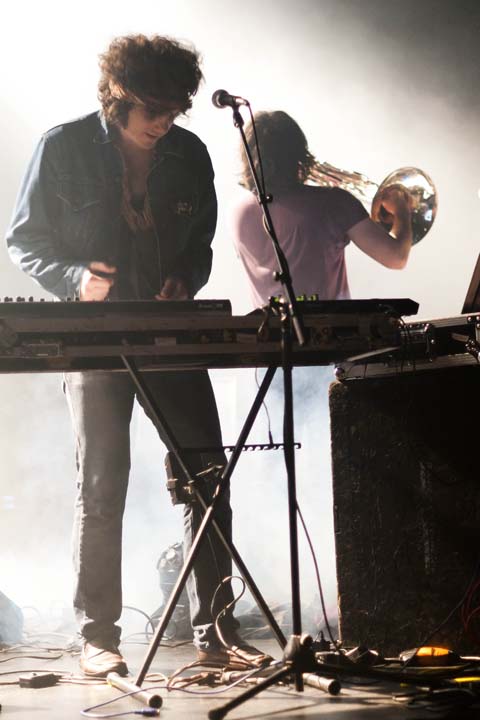 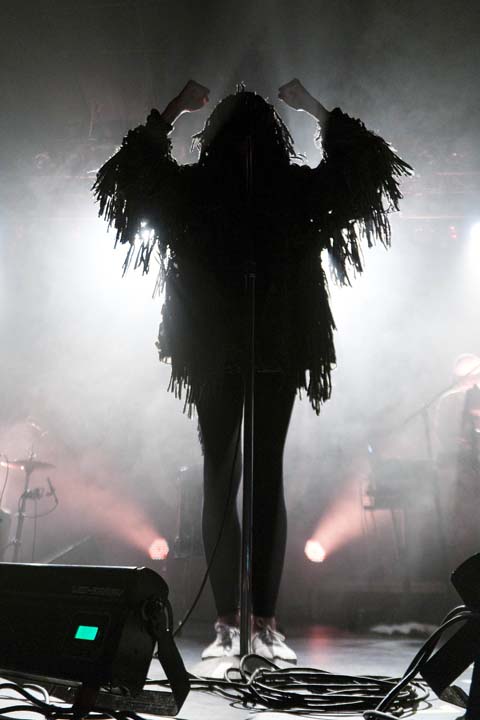 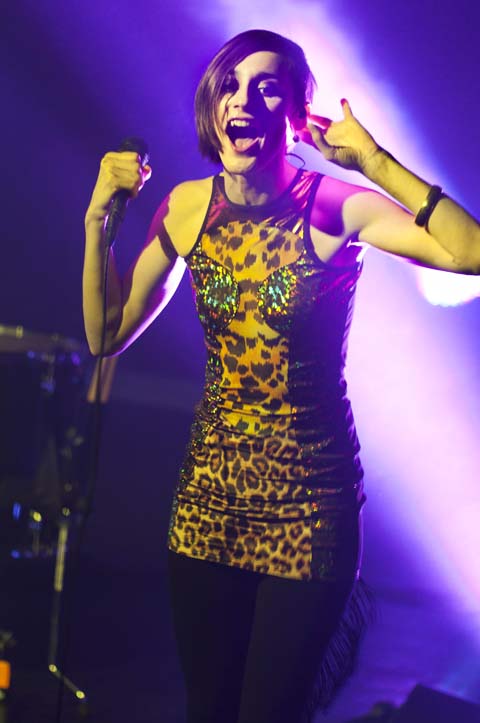 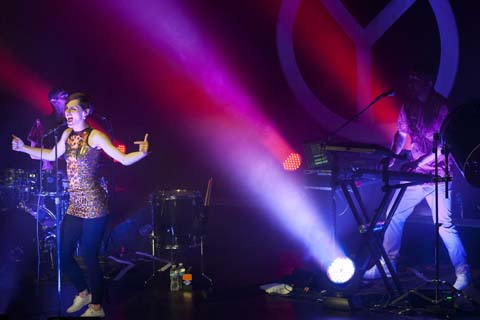 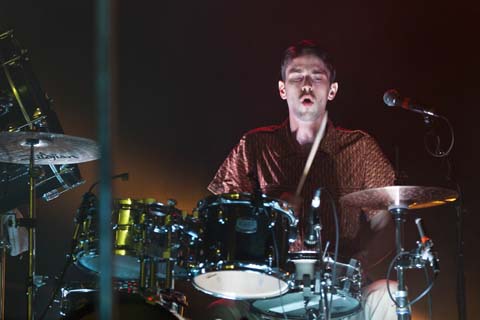 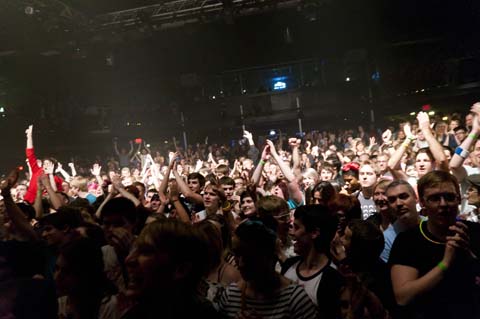 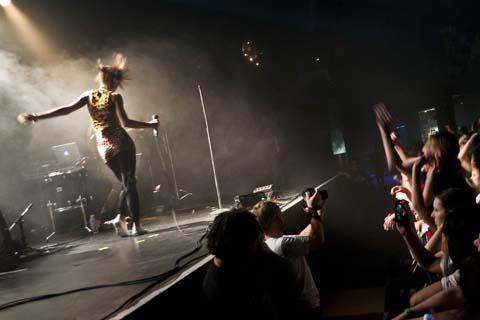 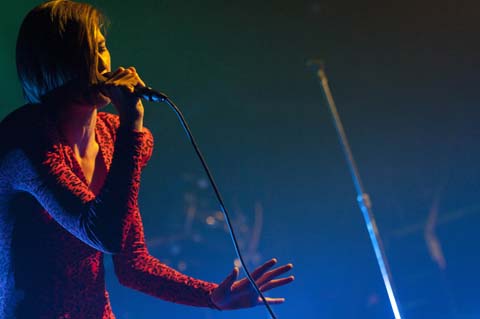 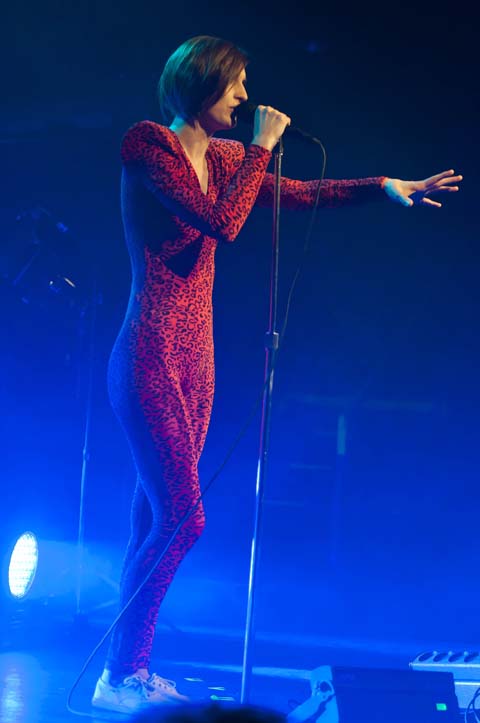 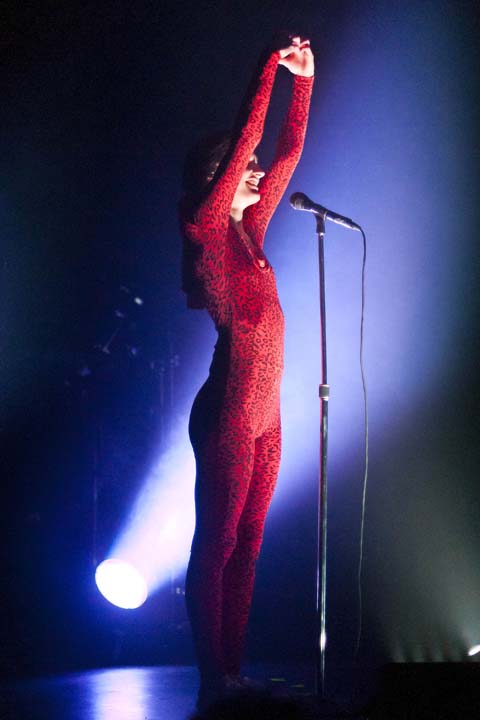 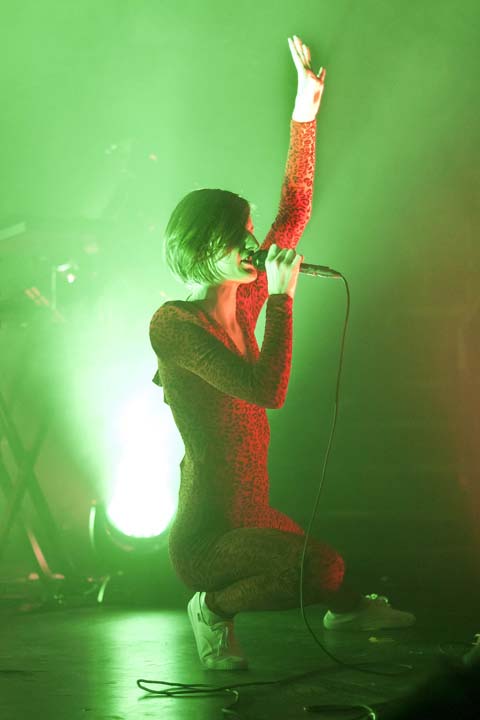 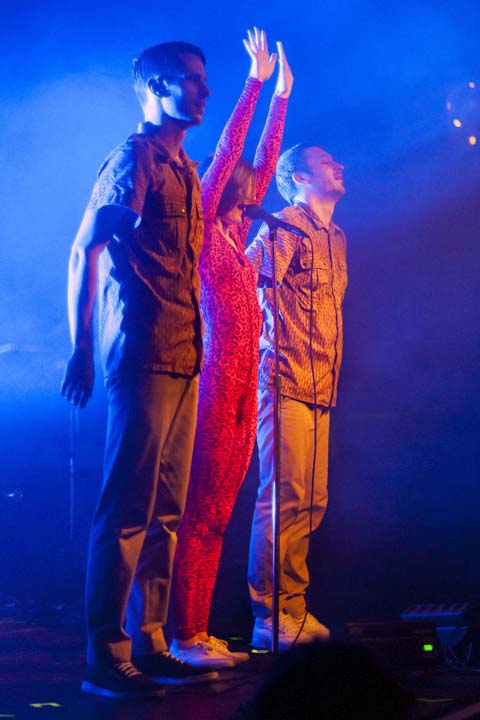