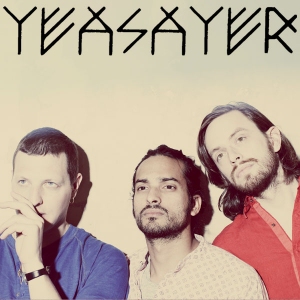 This is the review that may not have been. My dad promised me that he would take me to the Yeasayer show on August 24th, but conveniently forgot and went fishing up north instead. I was so close to not getting in that it felt like I was Indiana Jones sliding beneath a quickly closing metal door. That close. But I grabbed my hat at the last second and I got into the show.

A band—a man really—named Daughn Gibson was the sole opener for Yeasayer. He was accompanied by the fair-haired Marry Lattimore (who used to play with Thurston Moore) on the keys and additional synths. Looking back on their performance, I get a distinct picture of Las Vegas. Daughn has a slightly twangy and deep singing voice, but it was backed by a neon-lit array of electronic compositions. It wasn’t fast-paced club music though. It would be the dingier neon lights that you see on the more run-down side of town. Listening to their recorded music after the show, it has a much more prominent country feel than how it originally seemed live. Both sides are pretty well-balanced but I—being a much more avid electronic fan than a country fan—preferred their live show to their studio album. It was interesting and different enough to have me intrigued, but not interesting enough for me to love it.

Another thing that tied Daughn to Las Vegas was his uncanny likeness to an Elvis impersonator. He had the lip, the hair, the vocal styling, and the stage moves to classify him as such. Speaking of stage moves, he had one specific move in which he mimed masturbating. I mean, it may not have been intentional, but if Daughn Gibson ever has fangirls in the future, they are going to freak. I’d imagine going on to one of their blogs and they have a GIF of said stage move as their background, tiled too so that there are 100 looping GIFs of the move. Not only would fangirls be smitten, but Lattimore seemed smitten with the man as well. She was incessantly looking over at him with extremely intense eye contact. They could’ve made these moments into some awesome stage chemistry, but Gibson did not even glance over at Lattimore once the entire time. He was too busy scowling at the crowd and making introductions like, “This next song’s about sex times.” I’ll give him credit for trying to make his songs lyrically interesting and narrative, rather like older country ballads from the 30s. The backing electronic music was good in its quality, but just not dynamic enough to keep the whole song cohesive and successful. I did end up buying their album, All Hell after the show, but I wish it were a bit heavier on the electronic and less focused on the country.

After my interview with Ira Wolf Tuton, I’d expected the stage set to be pretty extravagant, but I hadn’t expected anything quite like this. I actually got to see the set while they were building it earlier in the day because I was at a music business camp all week and we took a tour through First Ave. It’s a mass of angular frames filled with mirrors and white screens. They even constructed a keyboard stand to match the style. The end effect wasn’t at all contrived and really added to the whole experience. It’s amazing what a little bit of smoke and mirrors can do. My favorite part was probably when they lit the mirrors and screens with a purple lighting and then had all of the cracks in-between the panels lit up either orange or green. It felt like I’d stumbled upon a laser tag course that just so happened to have Yeasayer jamming out in the middle of it.

Speaking of jamming, Yeasayer did just that. The setlist was—surprisingly—interspersed with more All Hour Cymbals tracks than Odd Blood tracks. I’d expected the set to be Fragrant World heavy because they’re obviously touring for that album, but the absence of some of the more upbeat Odd Blood songs was a bit of a letdown. I thought that they were for sure going to end with “Rome.” They at least included Madder Red and Ambling Alp in the set, but the stage arrangements lacked the complexity displayed in the original songs. Ambling Alp was missing a lot of the dynamic beat patterns and volume changes that are present in the studio version. It was still good to hear the song and it was definitely executed with and energy, but the composition could’ve been a lot better (e.g. closer to the original).

Despite these disappointments, this performance was definitely enjoyable. Chris Keating wins the award for Most Nerdy Outfit of the bunch, as he was dressed in a button down tucked into rolled-up khaki pants and topped off with a fabulous leather vest. As the show progressed, he shed his layers and his shirt came untucked which cooled it down a bit. Maybe that’s part of their act. Chris acted as the front man of the show, and kept the crowd engaged with his jittery dancing antics and sing-along prompts. Cale Parks, a newly added touring member, was also one of the more energetic people of the band. He kept up his intensity and drummed through the hour-long set with just as much vigor as he started with. Without a drum stool no less. All of the band members retained their musical skill within the live show, and put on a technically tight performance. All in all it was a fun and visually interesting show, but it could have been just a few notches better. Note to self for next time dad says he’ll take me to a concert: incessantly bug him about when the show is, even if he writes it on his calendar.