It’s been quite a year in the economy.  70% of all Americans think the economy is going badly according to a CNN poll, with unemployment the biggest concern of a solid majority.  By a 7-1 margin Americans will tell you this is a bad time to find a “quality” job, by a recent Gallup poll – the worst figure they’ve ever seen.  But 2011 was a year in which there was solid growth in the total number of jobs, even if they aren’t quite what people are hoping for.

Total job growth was around 2M total for the year once we have the last of the data in.  That’s about what anyone expected for the year, but what’s been surprising is how consistent it’s been.  The graph below shows data from the St Louis Fed on the total number of jobs in the USofA: 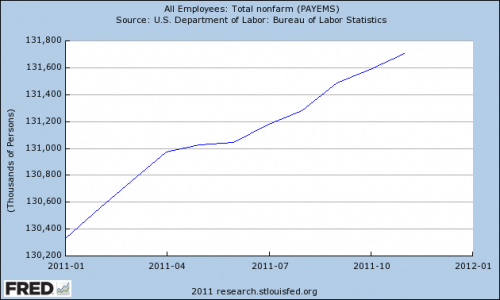 With such solid, consistent growth, why is everyone so down on jobs and their prospects?  The answer has come to us in waves through the year, as shown in the same chart with an overlay of the unemployment initial claims figures (scale on the right), a measure of layoffs at larger companies: 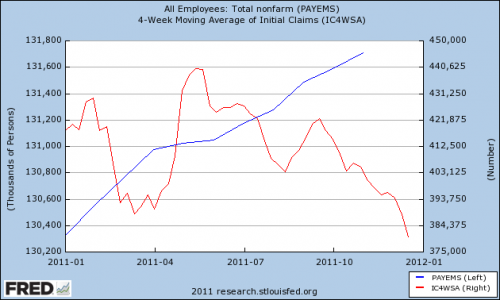 Despite overall job growth, there were nasty spikes in job loss going into the Summer and again in the Fall.  While there are jobs out there and growth is continuing, there is less security and more constant scrambling.

Note, however, that we’re ending the year with a solid drop in initial claims.  The worst may indeed be over for layoffs at larger companies.

Going into next year we can see there is momentum for an improved 2012 in many ways.  But the turnover in jobs remains high even as the total number of jobs is improving.  Quality of the jobs we have is clearly a major concern for everyone, something that is going to reflect security as well as pay and benefits.

Taking all of this together, there are many signs that the economy is indeed restructuring to form a new economy – one that many of us are not going to recognize in the next few months.  It’s not an economy many people are happy with, but it is turning around overall.  While 2011 was not the absolute bottom for jobs (that occurred in February 2010), this was the year in which the restructuring which is laying the foundation for a real recovery took place.

Where are the new jobs?  Measures of small business job growth are notoriously slow to catch up, running six months to a year behind overall surveys of workers. I won’t report them here for that reason.  But given that there has been solid job growth in the face of strong layoffs at government and larger companies, there has to be job growth in small businesses.  These typically offer less security, longer hours, and fewer benefits. It explains the pessimism about “quality” jobs.

But given time, small businesses sometimes grow into larger businesses that provide the bulk of the jobs in the economy.  In an excellent piece by Jared Bernstein, a senior fellow at the Center on Budget and Policy Priorities, the difficulty of relying on small business to grow the economy is explained:

But don’t small businesses at least fuel job growth? Sort of. It’s not small businesses that matter, but new businesses, which by definition create new jobs. Real job creation, though, doesn’t kick in until those small businesses survive and grow into larger operations. In fact, according to path-breaking work by the economist John C. Haltiwanger and his colleagues, once they accounted for the outsize contributions by new and young companies, they found “no systematic relationship” between net job growth and company size.

This is what appears to be the story of 2011 in employment.  New businesses appear to be springing up and creating  jobs, but they won’t really show solid growth until they take off and become established.  That’s likely to be the story for 2012.

Polls show that Americans are pessimistic at the end of 2011, but their fears may be overstated.  We won’t know for sure until the middle of 2012, but there is reason to believe that the restructuring is kicking in and things will improve.  It may not have felt like it, but 2011 may yet go down as the year that we turned the corner and the restructuring that fueled the next economy started.  Here’s to a Happy New Year.