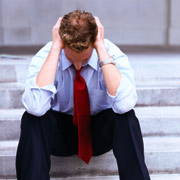 Minnesota is in the 12th year of a “Lost Decade,” according to the story jobs numbers tell, notes Kevin Ristau, education director for the St. Paul-based Jobs Now Coalition. At first glance, the numbers are deceiving, with a gain of 51,000 jobs in the 18 months since January 2011. Minnesota has now gained about 100 more jobs than the 50,900 jobs lost from 2001-2010.

If we only look at the 2007-2009 Great Recession, our jobs gains look like a genuine recovery is underway. To do that, however, ignores the jobs drain in the previous decade. “We would have needed to increase the number of jobs in Minnesota by about 300,000 to just keep pace with population growth,” Ristau said. 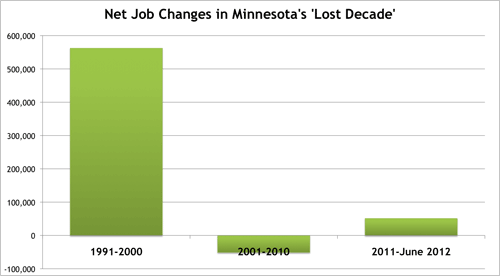 International finance analysts and bankers coined the “Lost Decade” term to describe Japan in the 1990s. World economic watchers argue Japan “is well into the 21st year of ‘The Lost Decade’.”

The Nation magazine recently published an article declaring the U.S. “Halfway Through the Lost Decade.” The London-based Financial Times made the same observation about the global economy, noting it’s been five years since the sub-prime mortgage crisis on Wall Street spilled over on the rest of the world.

It’s difficult to compare Minnesota to world economies, or even other U.S. state’s for that matter, because of the numerous benchmarks observers use to measure economic progress over time.

Justin Wolfers made that point in an article for freakonomics in June 2011, noting that the U.S. financial crisis is keyed to the Lehman Bros. financial collapse in September 2008. The National Bureau of Economic Research (NBER), he said, pegged the Great Recession to December 2007, and other economic data suggest the real Great Recession started a year earlier.

For those reasons, Ristau said Minnesota should look all the way back to 2000 for the beginning of our current depressed economy. “That makes it a 12th year of a ‘Lost Decade’, he said.

That would be consistent with past economic history in the Midwest. John Van Hecke, executive director and Minnesota 2020 fellow, recalls that the Great Depression actually started in rural Minnesota around 1924, and not with the 1929 Wall Street crash.

Now as then, rural, or Greater Minnesota, felt the pains of a shrinking economic base before the rest of the state. In an unpublished analysis of jobs and job openings in March this year, Jobs Now Coalition mined the following data from Minnesota Department of Employment and Economic Development’s (DEED) ongoing Job Vacancy Survey:

The seven-county Twin Cities metropolitan area had ups and downs along the way, reflecting impacts from housing and financial bubbles. This would be more in line with broader U.S. economic results leading up to the recession and Wall Street collapse.

For a national perspective, Paul Wiseman wrote a particularly informative Associated Press look at the weak U.S. economic recovery since the Great Recession. It examines how the current recovery compares among the 10 U.S. recessions since World War II.

All were recessions. Yet all were triggered by different internal, or domestic influences, and by different external forces. Getting back on track starts with stabilizing local communities by reversing the trend of public sector job losses that put a drag on recovery. We do this through fiscal fairness.