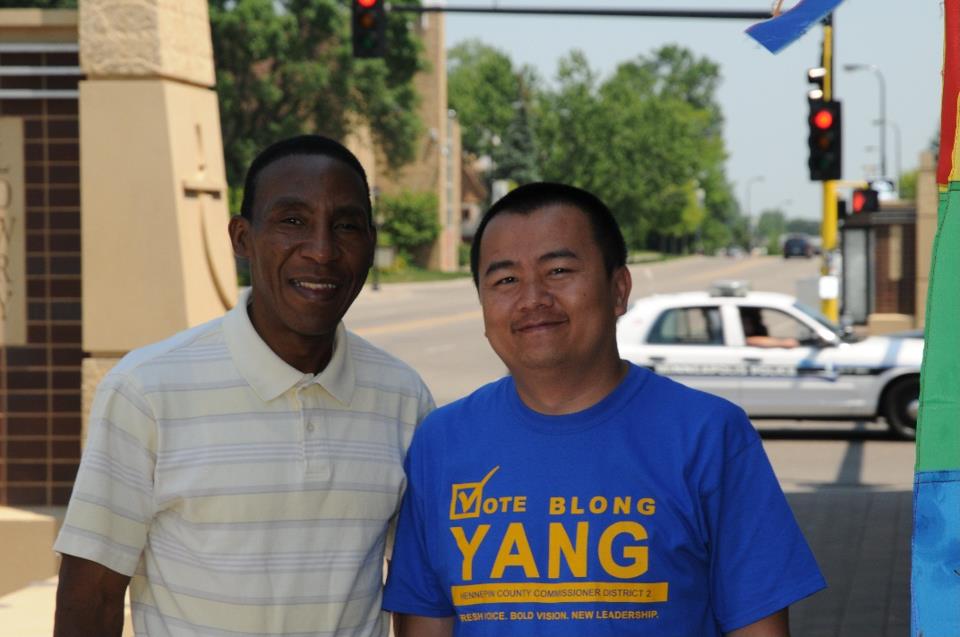 Green is a long time North Minneapolis resident and was the former St. Olaf College Dean of Students and Mulitcultural Outreach Director.

In 2006, Keith Ellison, against all odds, was elected into the U.S. House of Representatives . He was the first African-American elected into the House from Minnesota and the first Muslim elected into Congress. The historic election of Ellison into Congress reminds Minnesotans that change is possible. This year, Hennepin County’s District 2 faces an equally ground-breaking chance to be the facilitators of change.

Maybe you’ve come across the blue and yellow “Blong Yang” lawn signs scattered across St. Anthony, Northeast Minneapolis, North Minneapolis, Golden Valley, Medicine Lake, and parts of Plymouth. If you haven’t been following the race, then let’s fill you in. On August 14, 2012, Yang, one of ten candidates for Hennepin County Commissioner in District 2, took second in the primary. His victory suggests that, along with the rest of the nation, Hennepin County may be prepared to have leadership that reflects the people. If elected, Yang, who is Hmong, will be the first person of color to serve on the Hennepin County Board. When Yang first publicly announced his candidacy in April, he faced his fair share of naysayers. In fact, most people thought his chances were slim. But, like all great underdog stories, Yang beat the odds and is moving on to the general election this November.

With the motto, “Fresh Voice. Bold Vision. New Leadership.,” Yang’s campaign doesn’t beat around the bush when it comes to explaining why he is the better candidate. He is not a career politician. He has built a grassroots campaign, surrounding himself with a young team of staff and volunteers. His donors outnumber his opponent’s by a factor of four. He has broad support from the voters across the district in every precinct from all political parties. He has excited many new voters who are voting for the first time as well as frequent voters who are tired of the status quo. Yang has been bold enough to point out the elephant lurking around the signature Lowry Bridge. With an initial budget of $36 million in 2007, the Bridge will cost nearly $104 million when completed. This drastic overspending placed the vast majority of the Bridge’s costs on the shoulders of taxpayers. The difference in cost for county taxpayers, as stated in an article released by the StarTribune, veered from an initial $9.4 million to a whopping $66.5 million.

Vocalizing opposition to county government’s implementation of projects that guzzle taxpayer dollars is just one of the many ways Yang stands up for fiscal accountability. But let’s not forget, Yang is anything but a newbie when it comes to standing up for the people. He has worked in the community he lives in for over the last decade. As an investigator for the Minneapolis Department of Civil Rights (“MDCR”), Yang contributed to the elimination of the chronic backlog that had plagued the MDCR for decades. If his time as an investigator doesn’t impress, his time as a man of the law certainly should. After law school, Yang worked at the Legal Aid Society of Minneapolis as an Equal Justice Works Fellow / staff attorney for two years,
advocating for limited English proficiency persons. Then, for the next eight years, he practiced law on his own, assisting and representing everyday people on an array of legal issues.

With his credentials and his platform, it’s no wonder he is generating buzz across District 2 and on Comedy Central. Dan Poppy, a blogger with Comedy Central’s Indecision: One of a Kind Candidates, stated, “…Blong Yang is a man with a viable campaign and an original music video…Sometimes, America is great.”
Being only 36-years-old, Yang naturally does for the Hennepin County Commissioner race what Obama did for the youth vote in 2008–minus the Hollywood sensationalism. At this June’s Celebrate Northeast Parade, for example, 40 young volunteers marched on Central Avenue for Yang. Sixteen of them played the qeej, a Hmong music instrument, while marching. This may have been a first on Central Avenue.

What appeals the most about Yang is how accessible he is. He has attended numerous community events in the Twin Cities. He’ll talk to anyone, young or old, rich or poor, DFL or Republican or any other party. As one supporter remarked, “I can’t believe I just got an hour and a half of your time!”
Yang is committed to protecting essential services for our most vulnerable residents, ensuring effective prevention of crimes and fair enforcement of laws, improving and maintaining the county’s great transportation system, and making responsible and hard decisions for the future.

This November 6th, District 2 residents will have an opportunity to vote Yang onto the Hennepin County Board of Commissioners and into the county’s future.