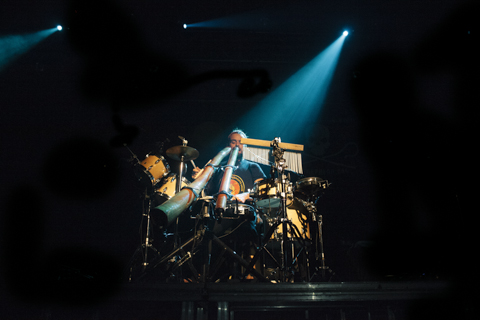 Even though I’m not a hippie, the hippie inside me couldn’t help but bob my head, sway my hips, and stomp my feet while finding it impossible to keep the smile from spreading across my face. With a perfect view of the mainroom from the platform behind the soundboard, the crowd appeared like ripples on the water, rhythmically swaying in unison and sharing their energy with the barefoot performer who was seemingly levitating over the stage before them as he shared his virtuosity.

Simply put, Xavier Rudd is master of his universe, and possesses complete control over the instruments he wields upon a stage from where he spreads his message of love, respect for humanity, and respect for the earth, which he refers to as sacred. The Australian musician is in the midst of a tour of North America promoting his new album Spirit Bird, his sixth studio album. He is known for his live performances, and Thursday night was no exception.

“I love the folkloreness and the message he leaves with every song,” said German Aguirre, 25, from Peru and living in Minneapolis. “I always feel good after his concerts; really good about life and the world.”

If anything, Rudd’s goal with his music is to bring people together and encourage their similarities while sharing the human experience.

He began the show with the jam “Lioness Eye” from Spirit Bird, where he created an otherworldly sound with a deep, pounding beat with his percussion skills and vibrated the walls with his didgeridoo. Entranced, the crowd was pulled in immediately.

Working his way through his set, Rudd continually smiled, raised his arms, put his hand over his heart, and pressed his hands together to greet the crowd with the gesture of Namaste while bowing. In the midst of musical bliss, he invited a girl up to the stage who he saw twirling with an electric hula-hoop. To cheers from the crowd, Wendy Soleil, known as “Sunshyne,” danced with her hula-hoop displaying bright colors, which were matched by the stage lights. Puffs of smoke rose into the air (and they weren’t generated from a fog machine), and I couldn’t help but think I’ll never have to go to Burning Man as I was experiencing at First Ave, but with better music and minus naked people.

Rudd gave the crowd a world-class performance, playing lots of material from his new album, but also pulling from his past with songs like “Fortune Teller,” “Come Let Go,” and “Messages.” It was refreshing to see a musician who plays for himself and for his fans, and not for some corporate entity who will get him airtime. By staying true to himself and his roots, he created an Aboriginal feel with his didgeridoo, and an atmosphere of love and inclusion. The man brought a bit of Australia to Minnesota, and his fans couldn’t have been happier.