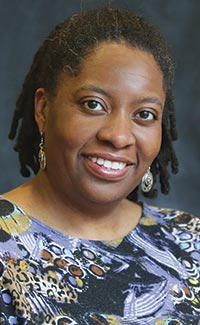 Sherrie Fernandez-Williams was a child of few words. That’s surprising since words are now her stock-in-trade.

“I was slow to speak,” says the author of the new memoir, “Soft.” “I used to create an imaginary world in my room, and I actually came to story before I came to words.” Her mother, a single parent raising eight children in a housing project in the Brooklyn section of New York City, was pretty happy that her youngest child was content to play in silence.

But Fernandez-Williams is no longer silent. She discovered the joy of words as a third-grader when she was assigned to write a short composition. She couldn’t stop, and wrote through lunchtime. The teacher finally made her put down her pencil but later read the story out loud to the class. They enjoyed it, and Fernandez-Williams thought: “Today’s my lucky day.” A seventh-grade teacher also encouraged her writing, which led her to believe that, despite her shyness and her poverty, she had something to say.

Wow! Does she have something to say!

A change of plan

Reading “Soft” is a lot like talking to Fernandez-Williams in person, with the feeling of an intimate conversation between two friends. She speaks without a trace of the dialect she grew up with and sounds more like a dyed-in-the-wool Midwesterner than a “a little Brooklyn, a little Southern and a tiny bit of Caribbean rolled into one person.”

Though hers is a tough story, it’s also a sweet story, revealing a wide-eyed little girl in “welfare glasses” who quietly observed the world, a gentle soul who was buffeted in the rowdy life of a big chaotic family and a violent neighborhood where she had the shoes stolen right off her feet.

After the tumult of her childhood, she says, “I just wanted a normal life.” That would resemble the stereotypical middle-class ideal – a nice husband, kids, a house in the suburbs and a career as a teacher like those who inspired her as a child – like “The Cosby Show” on TV.

Part of that came true. She moved to the Twin Cities suburbs with her husband, they adopted 2-year-old twins, and she began work on a master of fine arts in writing degree at night and on weekends at Hamline University in St. Paul. But, as with most people (and Cosby!), real life didn’t match her imaginary ideal. Her precarious marriage unraveled with violence and infidelity. Raising twins wasn’t so easy, either. Moreover, she eventually came to terms with her sexuality and forged a new life with a partner who is a woman.

She found her way through the changes by writing. “It’s a way to process my life,” she says. She emerged from the Hamline MFA program feeling that she had discovered her unique voice and had started to take herself seriously as a writer. Along with her diploma, she graduated with a solid draft of her memoir in hand – but it was 10 years in the making. It’s a wonder “Soft” was ever published, because as her “self” constantly evolved, so did the truth she was trying to convey in her memoir, which forced more revisions. “Today I’d still write it differently,” she says, “but this is 100 percent my truth.”

Memoirs aren’t for the timid

Though Fernandez-Williams is no shrinking violet now, one sees in her a bit of the very observant young girl she depicts in the book, perhaps still “soft,” but in a good way. She’s clearly not the in-your-face extrovert whose life is an open book and for whom a memoir revealing personal pain and self-doubt might come easily.

She also felt hampered by the mythical “Strong Black Woman” peering over her shoulder as she wrote. Would her story and its revelations be disempowering for black women? Her fellow writers in Twin Cities Black Women Writing, a group founded by Carolyn Holbrook, a Hamline adjunct professor, disabused her of those concerns. They assured her that maintaining that unrealistic narrative wasn’t her responsibility and that, more important, it wasn’t the truth.

Ultimately, she says, “the book is for anyone who has wanted to make a change and anyone interested in intimate storytelling. My goal is to write toward hope.”

Her next project is a work of fiction, so she’s back to inventing stories, which seems much easier than pouring out her personal life. She feels lucky to have landed in Minnesota, a supportive place for writers, where she has received major awards, was a selected participant in the Loft Mentor Series for Creative Nonfiction and now works at the Loft Literary Center as program manager.

“I was meant to be in Minnesota,” she says. “I grew up in Brooklyn, but grew up as a writer in Minnesota.”

BOOKSHELF:
Sherrie Fernandez-Williams recommends these memoirs by women authors:
I Know Why the Caged Bird Sings by Maya Angelou
My Lesbian Husband: Landscapes of a Marriage by Barrie Jean Borich
Swallow the Ocean by Laura Flynn
Love Imagined: A Mixed Race Memoir by Sherry Quan Lee
Cross My Heart and Hope to Die by Aundria Sheppard Morgan
Telling: A Memoir of Rape and Recovery by Patricia Weaver Francisco
The Latehomecomer: A Hmong Family Memoir by Kao Kalia Yang

The profile appears in every issue of the Minnesota Women’s Press. It reflects our founding principle and guiding philosophy that every woman has a story. Readers are welcome to submit suggestions for profile subjects. Email your ideas toeditor@womenspress.com.