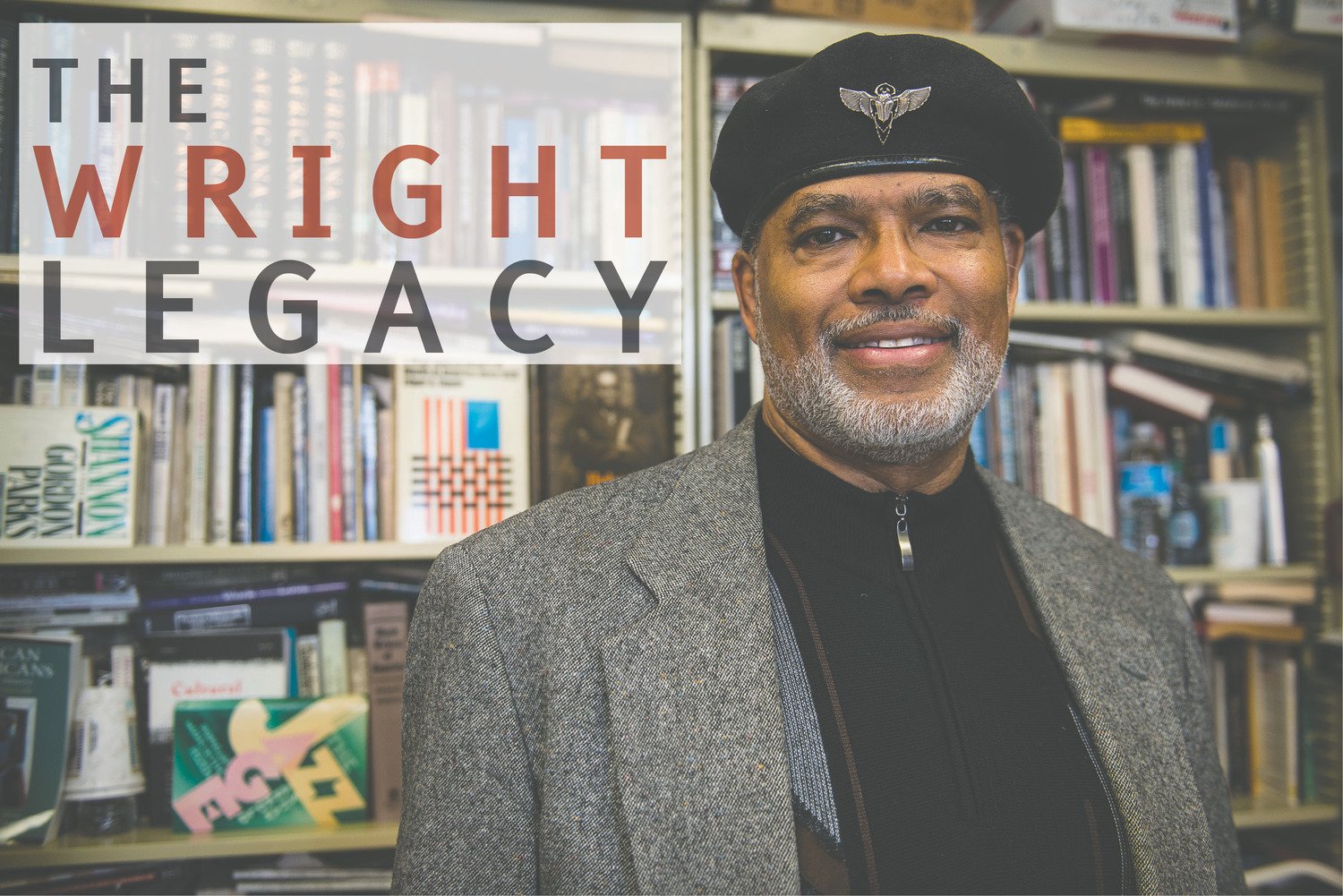 John Wright, professor in the African American and African Studies Department, in his office on May 6. (AliciaMcCann/MnDaily2014)

The faces that made up the double-file line of black University of Minnesota students looked only straight ahead. They were moments away from opening a wound on the school’s white and sensitive skin.

This is a Minnesota Daily special project.

On Jan. 14, 1969, a group of about 60 students marched nearly 500 feet from Coffman Union to Morrill Hall to occupy the heart of the school’s business operations, calling on administrators to address diversity and civil rights issues on campus. Nearly 24 hours after the protest’s start, both sides reached an agreement, taking major strides in eliminating institutional racial discrimination at the University.

“That was a moment that was hard to match,” protester John Wright said. “We knew there was still much to be done, but it was an exhilarating moment.”

In the four decades since the protest, Wright, 67, has been entrenched in the fight for civil rights at the University.

Although the black student population has grown from its meager numbers in the 1960s, black students today are still significantly outnumbered and the Department of African American and African Studies faces continual financial burdens.

“The obstacles are persistent … some of them growing instead of diminishing with time,” Wright said. “What we started in Morrill Hall in 1968 and 1969 is only partially finished. The bulk of the work is still ahead of us.”

One afternoon after a physics lecture, Wright walked home along the Washington Avenue Bridge — then just a wooden, two-lane road — when a group of white fraternity brothers in a Cadillac convertible drove by, stood up and yelled, “[N-word], go back to the fields!”

While those explicitly racist episodes were rare, Wright said, the feeling of being outnumbered and overpowered was what prompted the University’s small population of black students to take action.

“It wasn’t a constant stream of insults and hostility — those were comparatively rare,” Wright said. “It was more the sense of isolation, the marginalization that black students feel, the longing for a sense of togetherness.”

In the 1960s, Wright said, fraternities and sororities were largely segregated, some professors were openly racist and many black students encountered the “usual litany of insults and humiliation.”

“Those issues were impressed on the minds of students,” he said. “I was here when police helicopters flew over the mall tear-gassing student protesters.” 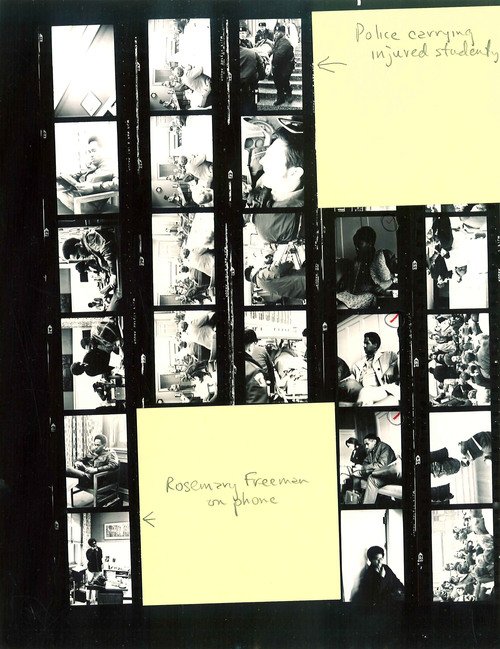 Right: A contact sheet including images and notes from the Morrill Hall Takeover in 1969.

During the 1967-68 school year, 147 incidents of unrest erupted on campus, a third of which were racial in nature, according to a University investigative report on the Morrill Hall takeover.

Even African-American athletes weren’t protected by their campus celebrity status. Ed Griffin, a Gophers athlete in the 1960s and later one of Wright’s colleagues, said athletics administrators leveraged athletes’ fears of losing scholarships and actively monitored them for interracial relationships and subversive behavior, which at the time included participating in the black student union.

And at the time, the University didn’t have ethnic or gender studies departments. The omission of non-white perspectives in curriculum exemplified how the University purposefully ignored minorities in the 1960s, said Anna Stanley, a Morrill Hall takeover participant who visited campus in February to discuss her involvement in the protest.

“That was not by accident,” she said at the discussion. “It was by design.”

In 1968, when less than 1 percent of the student body was black, the University was an “inhospitable place,” Wright said. And for some local families, he said, out-of-state black colleges seemed to be the only real access point to higher education.

One witness in the Morrill Hall takeover report said the University didn’t actively recruit students who were racial minorities or disadvantaged.

“The University was just there,” the witness said. “If you wanted to attend and could make it, well and good. If not, forget it.”

Wright served on the group’s executive committee. On a typewriter at his West Bank apartment, he drafted the list, which included requests like increased scholarship funds and recruitment and advising for black high school students in Minnesota.

The demands also asked University administrators to consider naming the West Bank library after King and to create an academic department reflecting the historic and social contributions of African-Americans.

Nine months passed without any progress. Meanwhile, growing tension between administrators and the Afro-American Action Committee threatened to boil over soon.

“We weren’t absolutely certain what we were going to do, but we were doing this in the spirit of Dr. King,” Wright said. 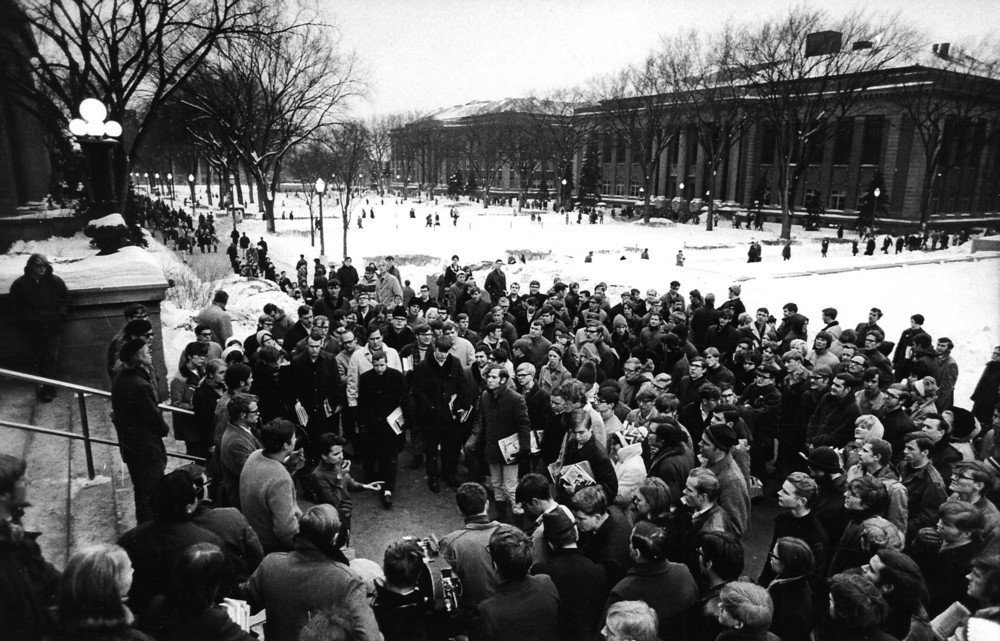 A crowd swells outside Morrill Hall during the second day of its occupation, Jan. 15, 1969, as negotiations continue between student protesters and University administrators inside.

A thin layer of white snow crunched underfoot as the group of black students marched into Morrill Hall’s Office of Admissions and Records at about 1:30 p.m. on Jan. 14, 1969. Shortly after that, administrators instructed staff to leave for the day.

But hours before climbing on top of document-strewn desks and building a nearly ceiling-high barricade of furniture, Wright called his father that Tuesday morning to round up bail money.

“We basically expected to be jailed, most of us did,” Wright said. “There was a bit of trepidation, of course, but we were hardly the first student protesters to be jailed.”

With negotiations lasting past midnight, both sides agreed to reconvene the next day.

A crowd outside Morrill Hall grew increasingly hostile as it swelled to nearly 600 by Wednesday morning with some protesters throwing ice and rocks, breaking at least two windows. Over the course of the 24-hour takeover, physical damages amounted to more than $47,000 in today’s dollars, according to University documents adjusted for inflation.

Members of Students for a Democratic Society, then a predominantly white group, acted as buffers between administrators and black students. They brought tubs of Vaseline to help protesters combat mace and tear gas, while other local civil rights leaders and visitors donated food, blankets and other supplies. 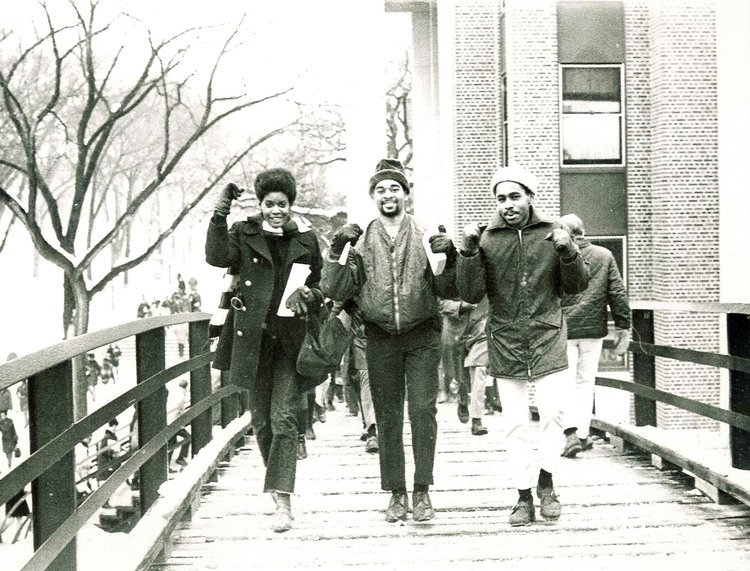 The protesters left the building through an underground path from Northrop Auditorium’s garage to Johnston Hall and Walter Library after administrators agreed to most of the students’ demands Wednesday afternoon.

Most people on campus hadn’t learned of the protest until they heard Walter Cronkite announce it on the evening news, Wright said, but in the course of only days, monumental gains were made.

The set of demands participants in the takeover made to administrators helped establish the foundations for the University’s Martin Luther King, Jr. Program and Department of African American and African Studies. Wright directed the former for three years and has been a tenured professor in the latter for 30 years.

“This event transformed life on this campus,” Wright said. “Things that were only wishes then have been institutionalized.”

He’s the descendent of a Buffalo Soldier, a member of the post-Civil War, all-black cavalry unit. He’s the grandson of a woman who helped organize the Black Freedom Movement and the nephew of a lawyer who presented Brown v. Board of Education alongside Thurgood Marshall. 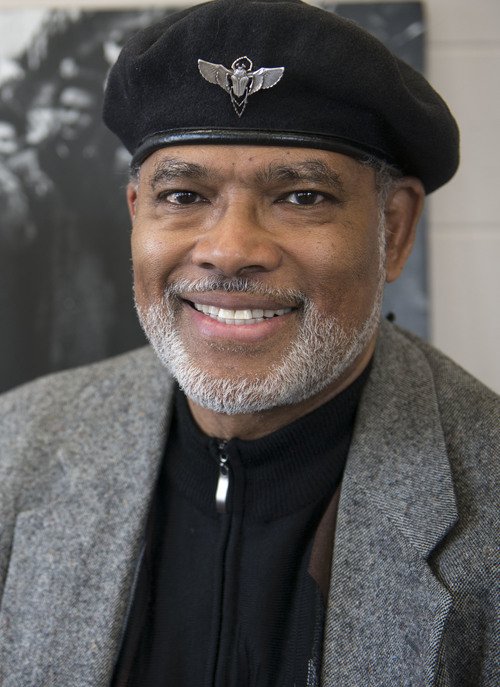 Right: John Wright, professor in the African American and African Studies Department, in the Social Sciences Building on May 6. (AliciaMcCann/MnDaily2014)

But skin color wasn’t on his mind until the age of 7, when Wright’s family relocated from Minneapolis’ racially diverse Phillips neighborhood to a 20-acre family farm in Robbinsdale, Minn.

Wright and his 5-year-old sister Beryl became the only black students in the school district, and they instantly faced bullying. On Wright’s first day of second grade, he was called the N-word for the first time and was sent to the principal’s office for fighting back on three separate occasions.

When a 16-year-old Wright graduated from high school as the only black student in a class of 800, he had only just begun his intellectual journey and struggle for civil rights.

Wright eventually became the University’s first black student to receive an American studies doctorate. And along the way, he received a bachelor’s degree in electrical engineering, won the University’s billiard championship four times and weight trained so much that one professor mistook him for a Minnesota Vikings player.

Since becoming a tenured professor, he has quietly gained the reputation of having a photographic memory and an encyclopedic knowledge base.

“Everything that he touches, he has to explore and get to the roots of,” said David Taylor, Wright’s former colleague and the last dean of the University’s General College.

Wright and Taylor worked together to resist the 2006 closing of the General College, which acted as an access point to higher education for many minorities and nontraditional students.

The intelligence that dominates his academic work also follows Wright home, said Serena Wright, his wife of 26 years and an events coordinator for the College of Education and Human Development.

Even after long days on campus, she said her husband’s mind spins on.

“He’s got the lights on, I can tell — his pupils are dilated and his eyes are shining,” she said, adding that a torrent of new ideas and discoveries always follows those moments.

From the moment John Wright sat down at his typewriter on behalf of the black student community in 1968, the University has transformed, in part because of his intellect and strong will.

“He doesn’t say much, but he listens very hard,” said Griffin, a retired University English professor of 44 years. “When he does speak, everybody listens.”

View timeline of John Wright at the U

Legacy behind, unfinished work ahead

Despite the University’s strides in eliminating racial inequality, Wright said black students today still feel outnumbered much like he did 45 years ago.

“I don’t think black students today feel so much embattled as they feel isolated,” he said.

Programs like the University’s Black Student Union and the Huntley House work to provide the recognition and reciprocity they crave, Wright said. 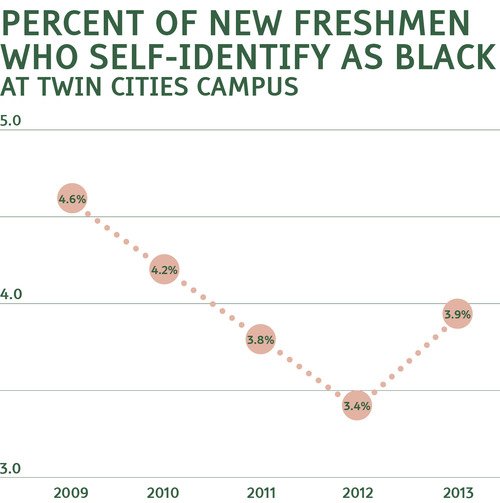 The percentage of black students at the University’s Twin Cities campus has hovered below 4 percent in recent years, nearly a third of what the black or African-American population is in Hennepin County.

And when the University feels fiscally threatened, he said, it cuts funding to programs like ethnic studies departments that it considers “most vulnerable or least central to its core mission.”

“The major ongoing obstacles for African American and African studies has been the almost perpetual circumstance of living under the shadow of a financial axe,” Wright said.

Weakening the program could cause the University to regress to an era in which white ideas and scholars dominate academia, Wright said, recalling that as an American studies graduate student, he could have completed his doctoral degree without ever being required to read a novel by or about an African-American.

As the University continues to grapple with issues of diversity and equality on campus, Wright said he plans to bow out, retire in five years and leave the work for future generations to tackle.

“One of the tests for the future is whether … students, faculty and staff will carry this work on or not,” he said. 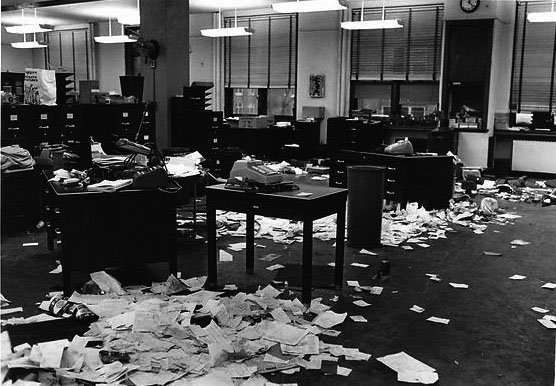 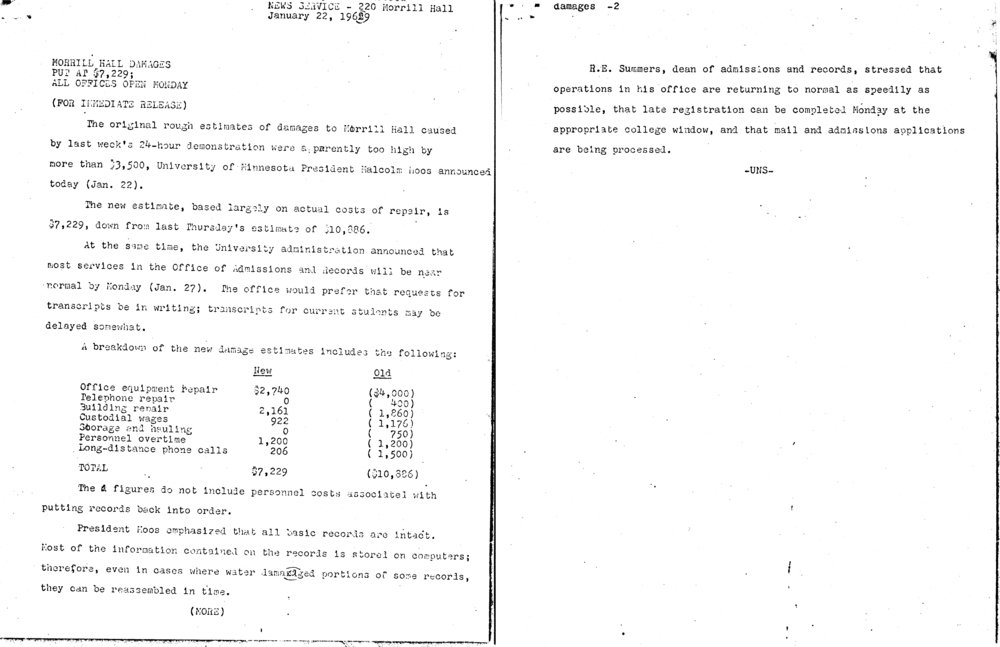 Damage estimates from the protest 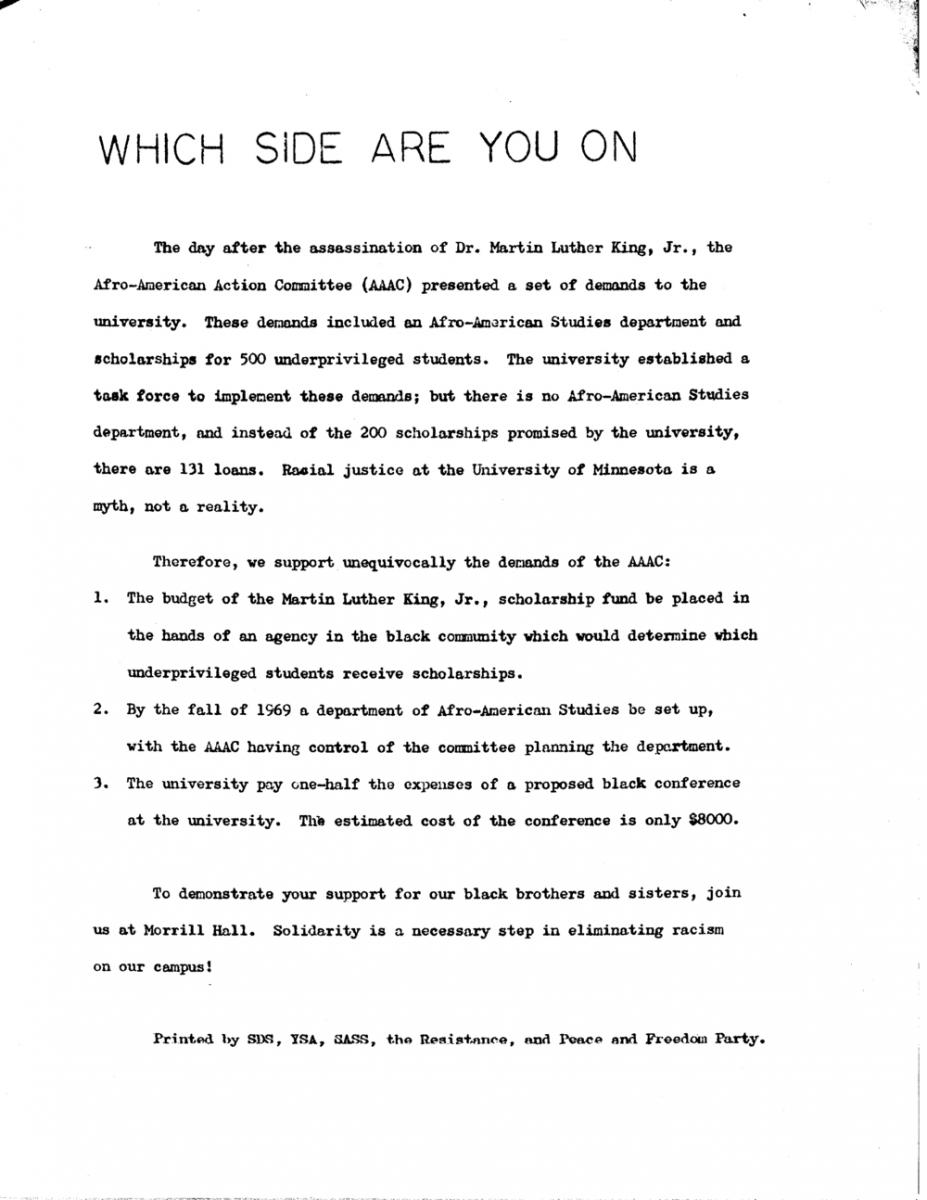 A flyer sent out by student groups after the protest

A pamphlet from a black student conference held at U, 1969 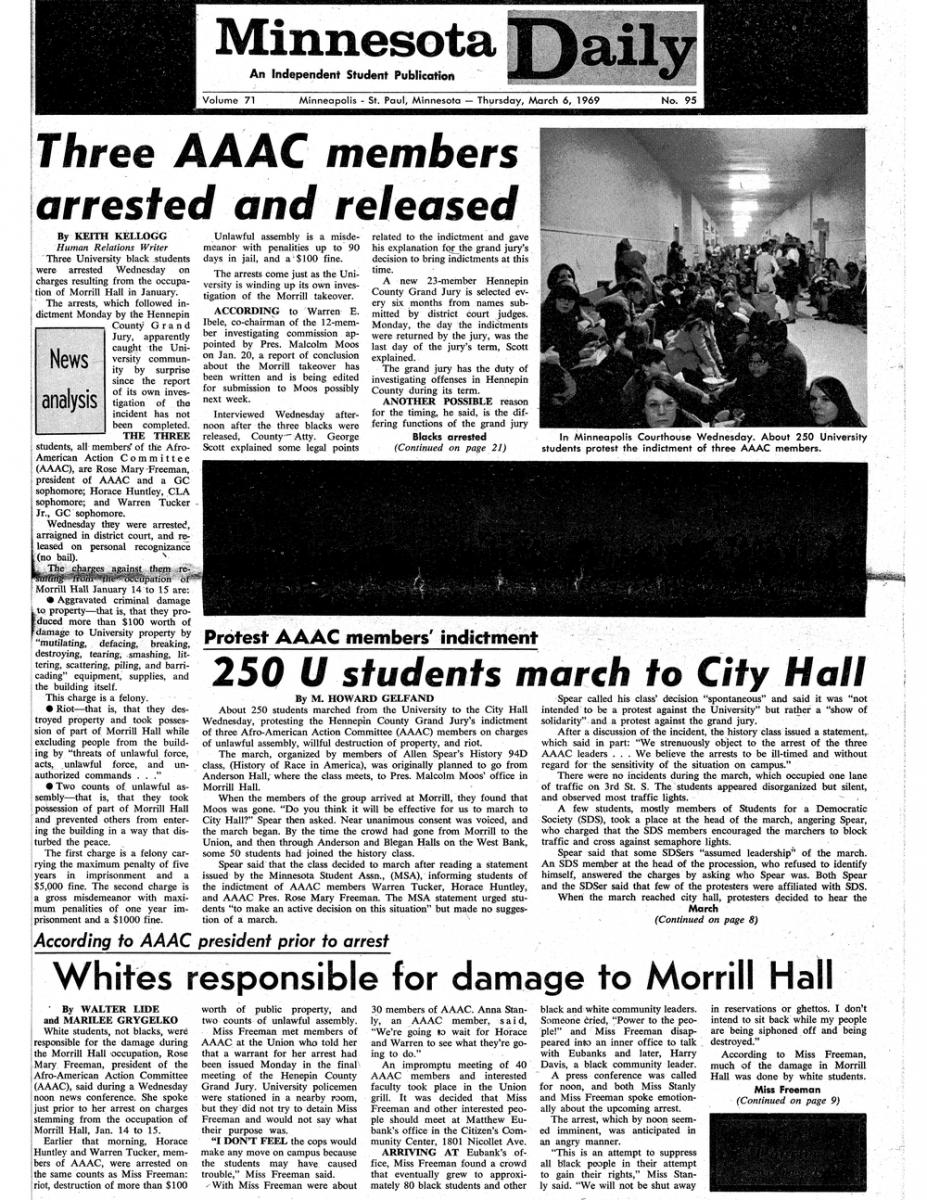 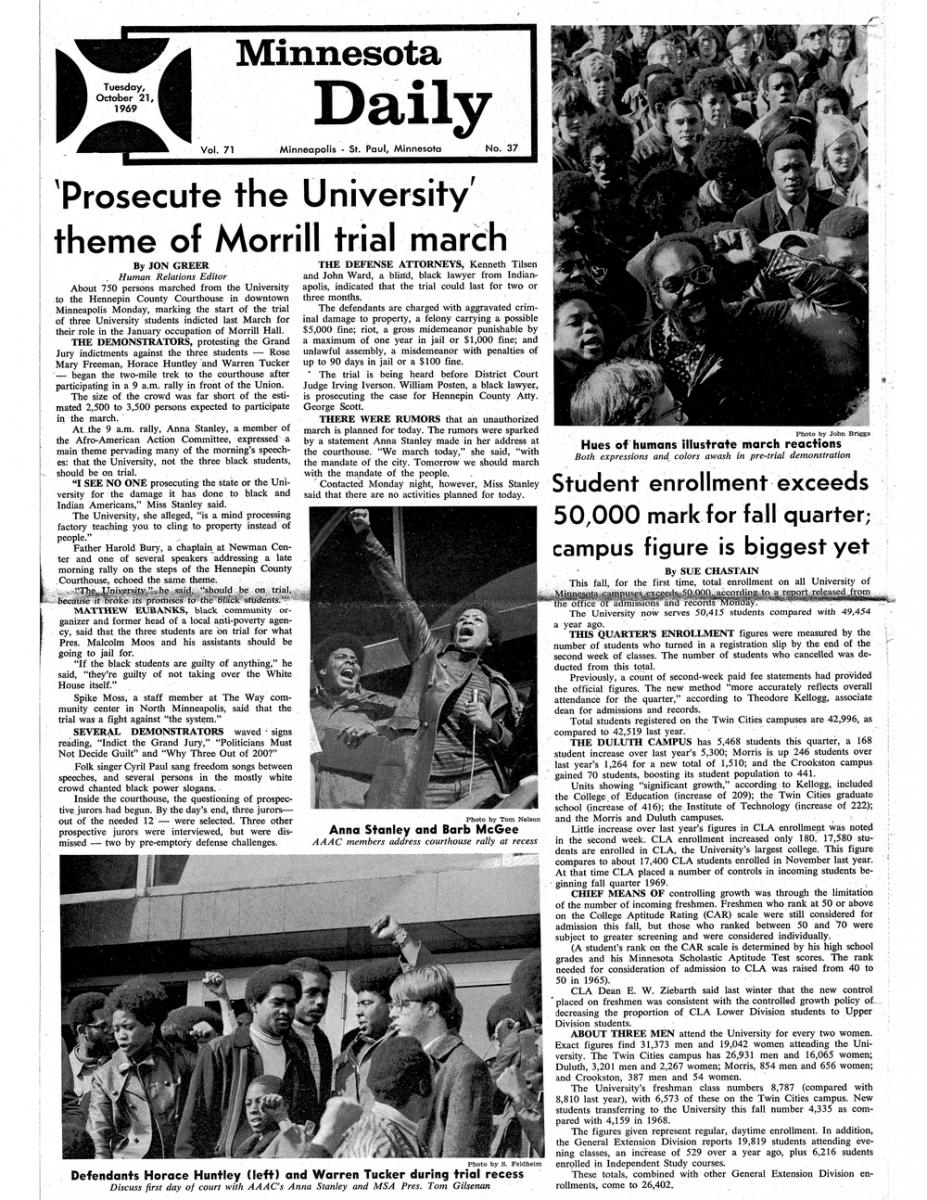 About: The fruits of the Morrill Hall takeover have taken root on campus today, as institutional racial injustices have largely disappeared from the University of Minnesota. This story, reported by Marion Renault over the course of two months, explores how one of the protest’s participants has spent the decades since the takeover fighting for civil rights at the University.

This is a Minnesota Daily special project.