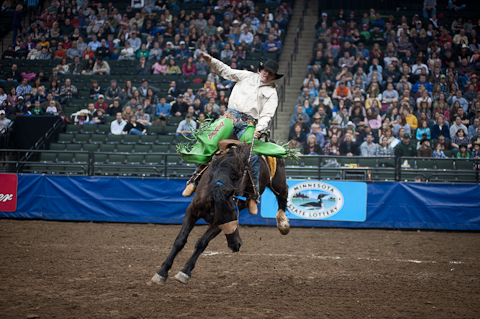 It took me all of one-tenth of a second to say “Yes, please!” when presented with an opportunity to cover a rodeo in the middle of winter. Having once been to the local Hamel Rodeo, I was interested to see whether the bigger, badder, nationally-touring World’s Toughest Rodeo would live up to its name. I saddled up with a riding partner and headed down to the Xcel Energy Center on Friday night to see what all the fuss was about.

The show started with a video of rodeo highlights, but the only real “highlights” that were shown were bulls or broncos charging at, kicking, or stomping on the riders that they had just tossed. A huge pyrotechnic display was next, followed by the introduction of all the riders. It was apparent that it was some of the contestants’ first time at this particular rodeo, as there was some confusion as to what side of the pyrotechnics they were supposed to come out on. Riders were introduced by event: bareback bronc, saddle bronc, and bull riding, as well as some cowgirls who would be competing in an obstacle course event. 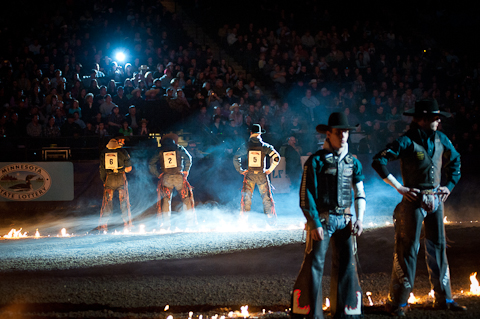 After all the riders were introduced, three ultra-tough-guy real-life cowboy types who would be competing in all three events got special introductions, complete with their own pyrotechnics and a song of their choosing. Surprisingly, one of them came out to a song from the electronic dance duo Justice! I was impressed. These riders were clearly the best of the pack, and they made it look easy in all three of the events. With names like Trey Broussard (who, as the MC was quick to point out, has a college education), Clovis Crane, and Charlie Barker, it was obvious that these guys made the right career choice.

After the introductions were complete, we were asked to rise for the national anthem. Well, no one actually said we were rising for the national anthem, and instead we were led through a prayer for the safety of the riders and the audience. Apparently that guy who told me that the separation of church and rodeo was still in effect was lying to my face. Next up was the national anthem…well, right after we said the Pledge of Allegiance, of course. 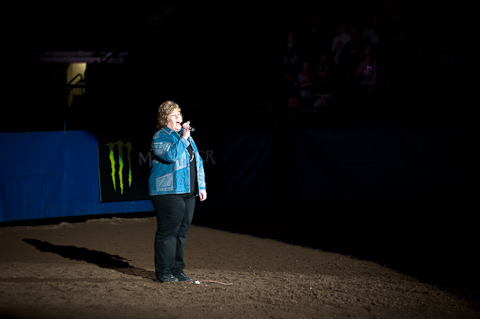 I went in without a good grasp on the rules of the rodeo, but they were pretty easy to pick up. The goal is to ride for eight seconds. If a rider falls off before that, he or she is not even judged; he or she gets no points. Riders who make it eight seconds are judged based on how hard the animal was bucking and how difficult the ride was. The highest score a rider got in any of the events was 82, which was good enough for one of the pros (Trey Broussard) to win the first event, bareback bronc, which is rodeo-speak for a horse without a saddle.

Next up was the saddle bronc, and from the look of things it seemed like having a saddle would make the ride easier. That turned out not to be the case, as many of the riders got tossed from the horse. Even though all three pros completed this ride, this was the only event that one of the amateurs won, with a score of 77. 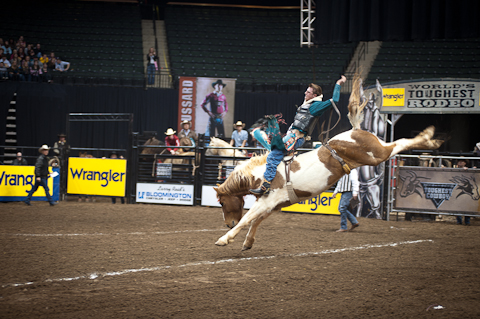 There was plenty of entertainment provided between the events, such as a dog who could almost catch Frisbees: he was just-so-close on the first three attempts before finally catching it on the fourth. (“Just like last year,” the guy sitting next to me explained to his friend.) Possibly the most entertaining and frightening event of the night involved little kids riding sheep and rams. In possibly the best use of music at any sporting event ever, several dogs came out for a mini dog show to the Baha Men’s “Who Let the Dogs Out.” I think it’s safe to say that we, the audience, let the dogs out.

The third event was an obstacle course for cowgirls in which riders were timed on how quickly they could ride around three barrels placed around the riding arena and then return back to the starting point. Maybe it was because there was no sense of danger for the rider, but this event was somewhat anticlimactic compared to the men’s events. 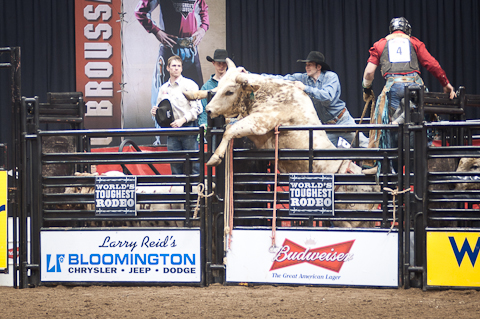 The main event of the evening, and rightfully so, was the bull riding competition. It too was unfortunately a bit anti-climactic as very few of the riders even made it ten feet away from the starting gate before they were bucked off. It wasn’t until good old Clovis Crane’s run that a rider finally completed an eight second ride on a bull. One of the other pros, Charlie Barker, was the only other rider to score at this contest, but his score was lower than Crane’s. It was apparent that this event was more difficult than the horse events, but again the pros made it look easy.

In the end, Clovis Crane won the night with a score of 230 points, the only rider to complete all three events. Based on names alone, I’d say he deserved it. 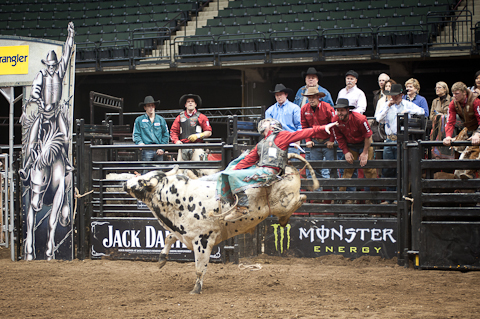 In doing some research for this piece, I discovered that I had some misconceptions about how the rodeo animals were treated. I had been told, and believed, that ropes were tied around the animals’ testicles to make them angry and buck harder. For the first time in my life (and hopefully the last), I Googled “rodeo testicles.” As it turns out, that is not the case at all.

The MC explained that the animals were “genetically engineered” to buck (sounds like a hip-hop album, right?), and I was skeptical at first. The general consensus that I found online confirmed what the MC said, and it makes sense as in the rodeo promoter’s eyes, the animals are just as important as the riders. The bulls were very muscular and lean. They are bred from parents who have a propensity to buck, and are trained from a very early age to try to throw off anything or anyone that is on their backs. A flank strap is tied near the hind legs of the animal simply to annoy the animal and make it buck harder—it has nothing to do with the animal’s testicles, so get your mind out of the gutter! 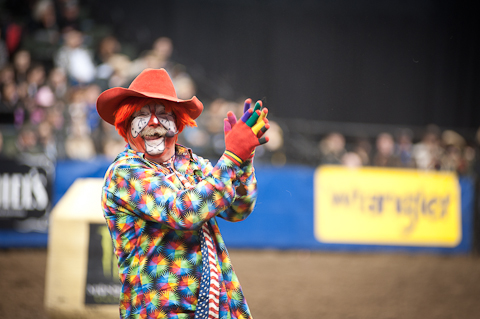 This proved to be a fun experience in which I learned a lot about the rodeo, but it just made me long for the Hamel Rodeo. Something about seeing a rodeo in a mostly empty hockey arena that charges $7 for a beer, not to mention the MC rattling off several ads for the event’s sponsors, took some of the soul out of it. The skill of the riders, especially the pros, was better than what I saw at Hamel Rodeo, but the whole rodeo experience just was not the same. 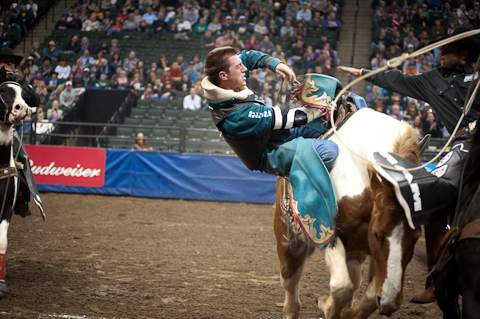 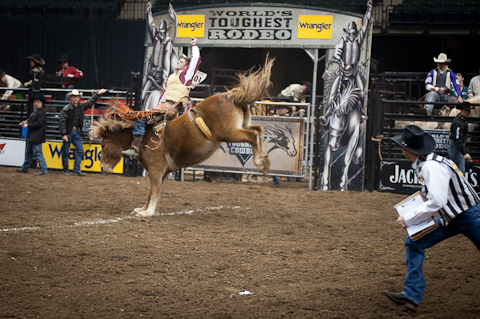 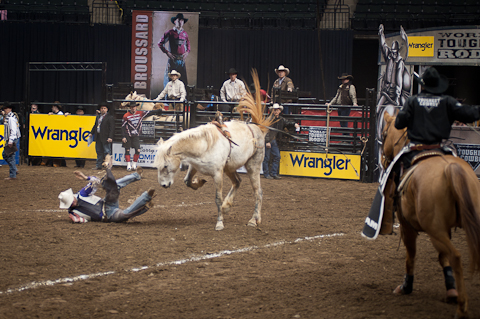 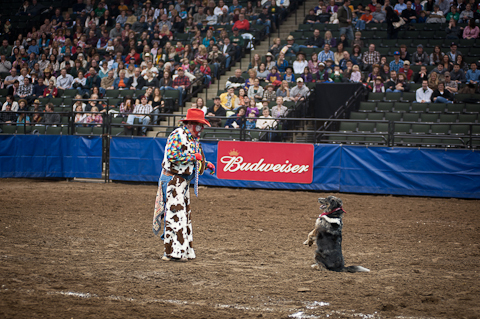 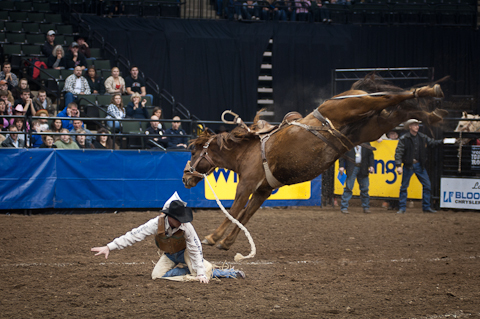 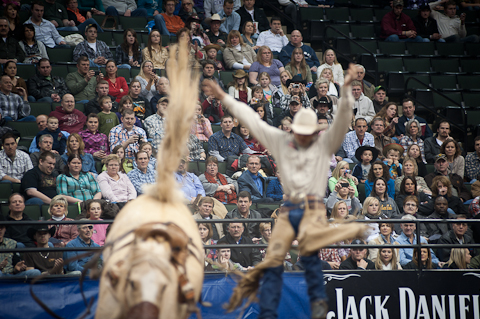 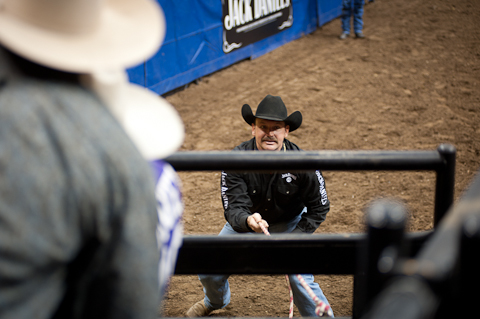 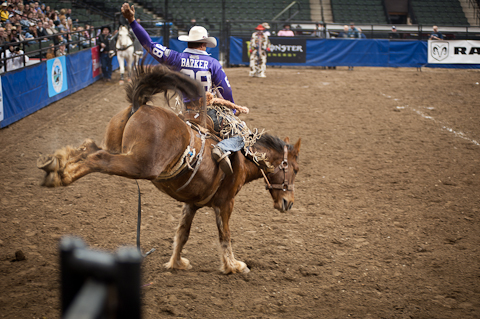 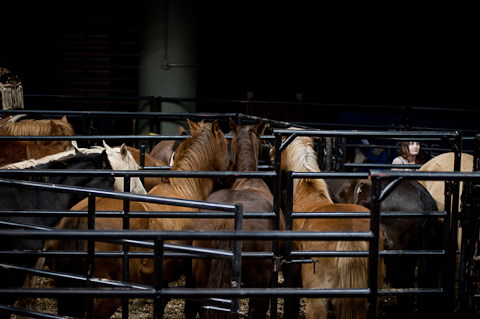 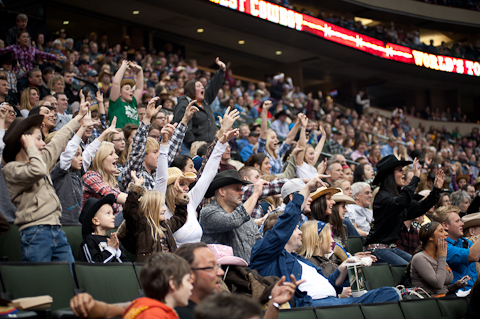 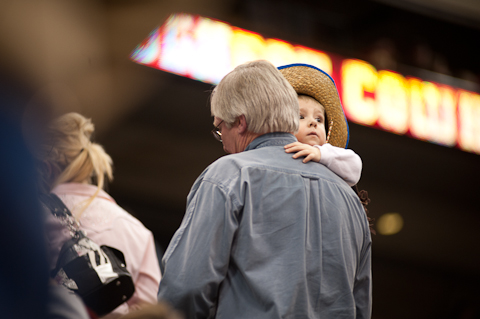 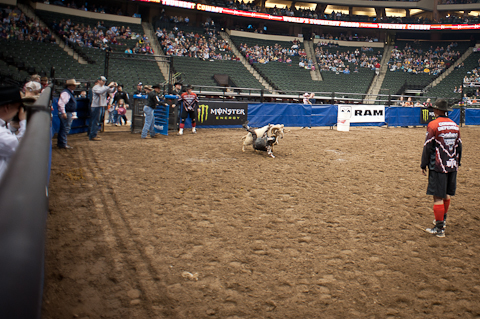 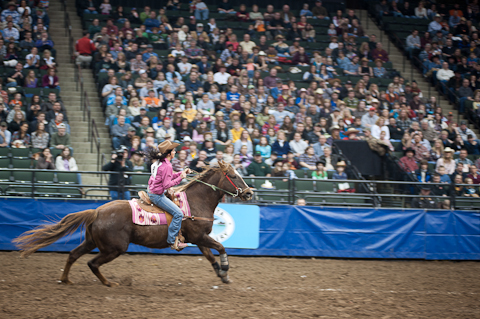 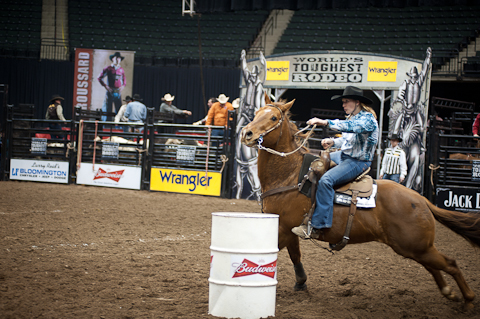 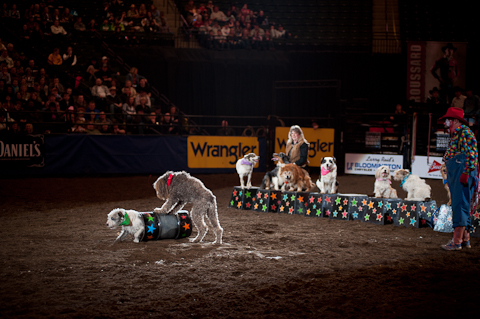 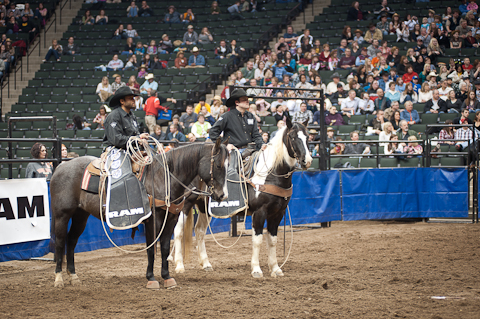 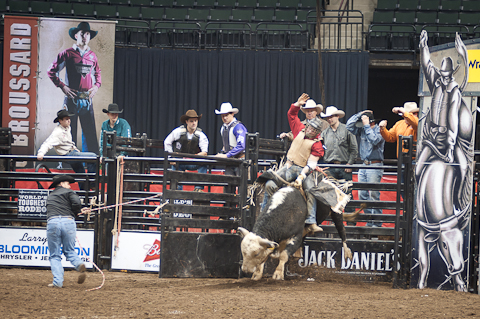 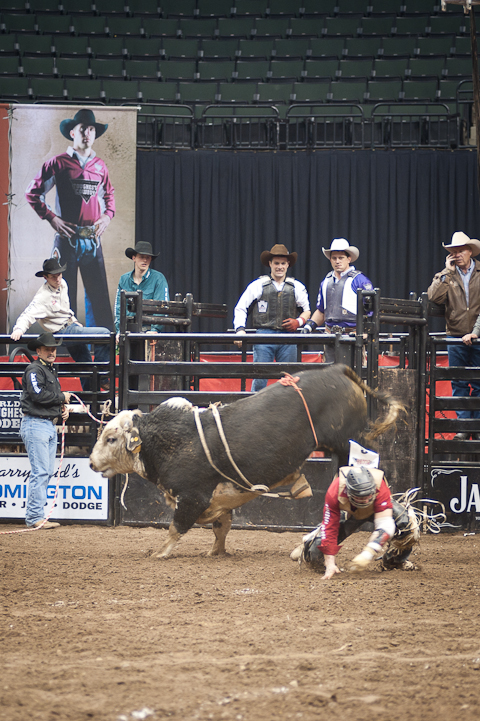 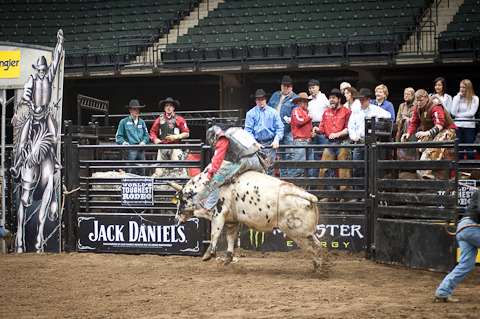 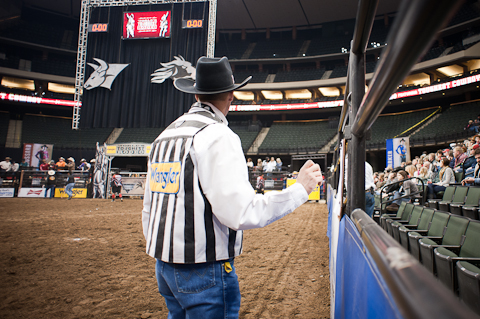 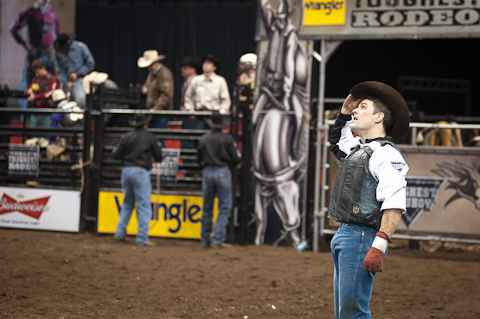 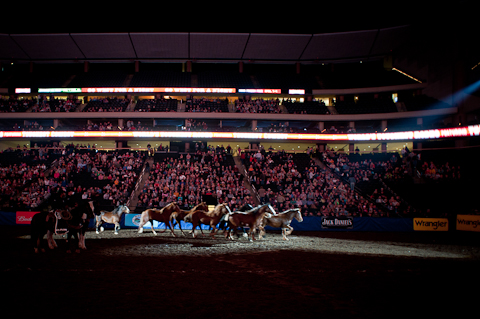