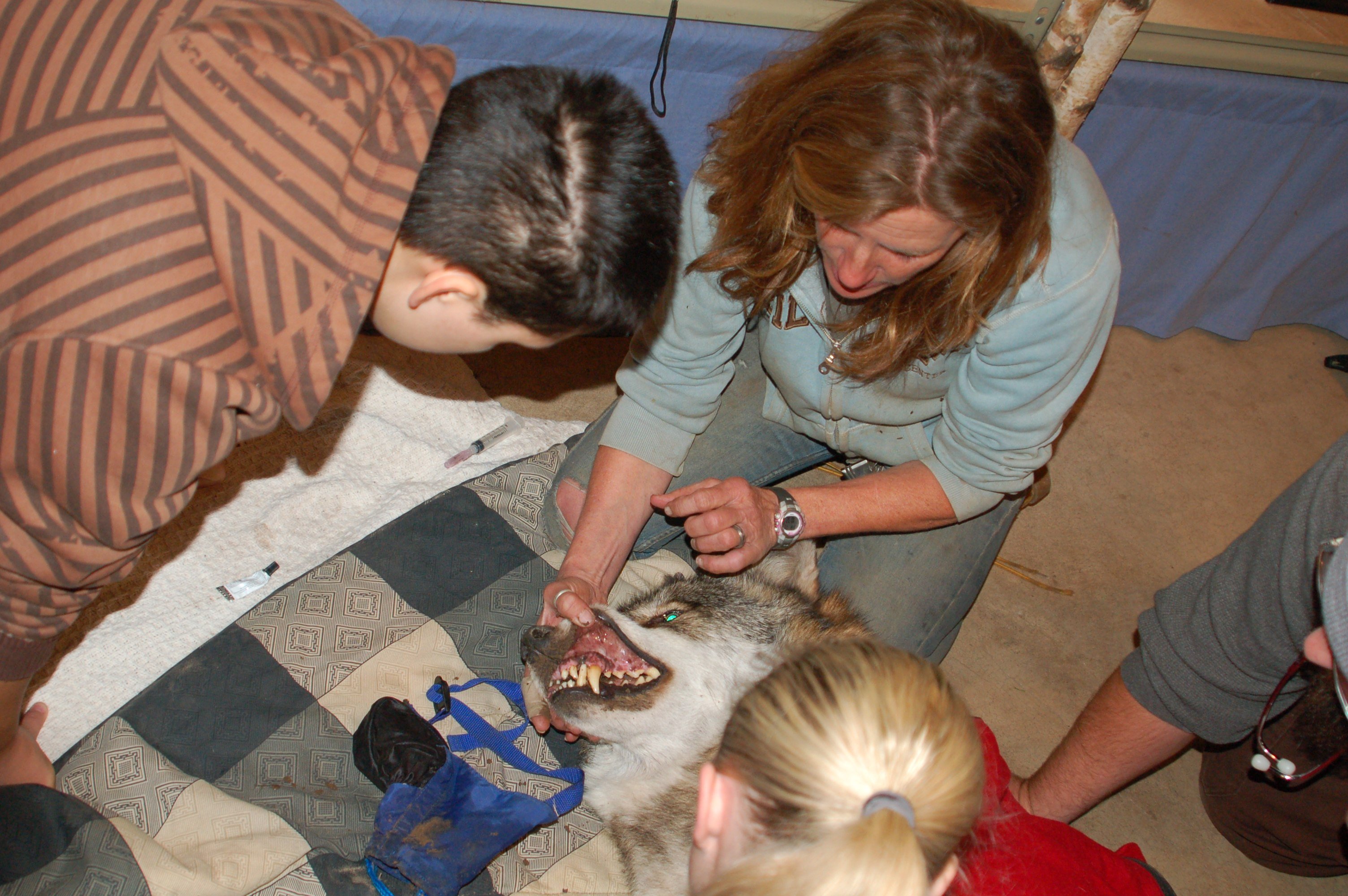 Inserting a syringe through the thick fur of a chemically immobilized wolf was surprisingly easy for Patrick Gelakoski, a student at Anoka-Ramsey Community College in Minnesota, even though he had never done it before.

“The needle went in very smoothly,” Gelakoski said. “I was thinking it was going to be hard. I was surprised at how good I did.”

Gelakoski was one of 16 students in Jennifer Braido’s field biology course who participated recently in a two-day training at the Wildlife Science Center in Columbus, Minn. The experience was part of the coursework and an on-going wolf study.

For some students, working with the wolves may well be a once-in-a-lifetime experience and one that few community college students could hope to have as undergraduates. For Gelakoski, the experience confirmed his desire to go into scientific research or teaching. “This is totally awesome,” he said. “I’ve always liked wolves when I was growing up.”

Another student, Lorenzo Nelson, a 17-year-old high school student took the field biology class specifically for the wolf experience. He is also earning college credit. “I’ve always really liked animals and I thought it was a once-in-a-lifetime experience.” He plans to become a lawyer. For his part, Nelson checked a wolf’s temperature, respiration and heart rate, and helped administer a vaccine. He also witnessed surgery to remove a tumor on the leg of one wolf.

Nelson said he never felt scared. “I had a lot of trust in the staff and the protocol we were following,” he said. “It all seemed orderly and safe.”

The students received the same training as some of the world’s top wolf researchers, Braido said. “They learn how to work with a wild animal in a safe, captive environment,” she said. “They are getting a real authentic experience.”

But the experience goes beyond the thrill of working with wild animals. “It helps students become better students and better educated citizens,” Braido said. Studies clearly show positive effects – not only on student learning but also on career choices when students participate in research projects as undergraduates.

Braido developed this undergraduate research experience and incorporated it into her Field Biology course with support from the Community College Undergraduate Research Initiative, which exposes community college students to hands-on research in introductory courses. With funding from the National Science Foundation, the initiative provides resources to Anoka-Ramsey and 25 other participating community colleges around the country for such opportunities.

Taught by Peggy Callahan, the Wildlife Science Center’s executive director, the students collected specimens – blood, hair follicles and fecal specimens – and obtained body measurements to help determine variation in the wolves and predisposition to disease. They also had to monitor the wolves to make sure they remained immobilized and their vital signs were stable during the examinations.

Once the field biology students collected the specimens, Anoka-Ramsey’s microbiology, genetics, and cell biology students analyzed them using a variety of laboratory techniques specific to the curriculum of each course. All results are fed into the study’s database, which helps answer several questions to help assess the health of Minnesota’s Gray wolves – known as Great Plains Gray wolves – relative to other Gray wolves in the country.

Thus far, Anoka-Ramsey field biology students have handled some of the center’s Great Plains Gray wolves as well as their Mexican Gray wolves which historically occupied the southwest part of the country although now, due to severe population bottleneck, nearly all of their entire population remains in captive breeding programs.

Braido noted: “We hypothesized that we would see a difference in the bacteria present inside each of these types of gray wolves because one population remains healthy and strong in numbers whereas the other population has become decimated over the years. Many studies show a correlation between the internal bacterial population and the body’s immune response. Greater bacterial diversity typically correlates with better immunity. So far, our results support our hypothesis.”

Braido’s students have also handled wolf-coyote hybrids, referred to at the center as “woyotes” – the offspring of a cross between western wolf and western coyote – conceived as part of an investigation led by famed wolf researcher Dave Mech.

The woyotes born at the Center are now on display for the public. Several of Anoka-Ramsey’s independent research students have sought out the opportunity to take on the responsibility of analyzing the woyotes’ specimens largely during their own free time but under the guidance of faculty members, Paula Croonquist and Scott Danneman.

These students are genuinely interested and motivated to gain real research experience, Braido noted. Some have even asked their own research questions and have the freedom and opportunity to pursue their answers in a novel and authentic way, she said. “We know that just under half of all undergraduate students in the country attend community colleges,” Braido said. “We also know that undergraduate research has been identified as a ‘high-impact’ educational practice that promotes ‘deep learning.’” And she added: