Folks in the heart of a major metro typically don’t have the “last-mile” transit problem—those times when the bus takes you most of the way but there’s that last stretch where you have to walk. In some cases it’s a few blocks, but in suburbs or exurbs it could actually be a mile or two.

Attracting more transit riders and growing the network is much easier when more people feel like the network reaches where they are and where they’re going. Generally, people will use transit only if they think it’s better (on cost or convenience) than how they get around currently. That’s why it’s important we continue working the last-mile issue.

Making it easier to use foot power for the journey’s unmet leg is an important step for travelers. Around the cities, bike-share programs like the Twin Cities’ NiceRide are poised to make spontaneous transit trips easier, but two-wheeled travel will be a lot safer and more appealing with some infrastructure upgrades. Including more physically separate, curb-protected bikeways around the cities would be a real boon to transit—and the same goes for the suburbs too.

A few infrastructure alterations can really go a long way, even in less dense communities. Better connecting the south metro’s Red Line and upcoming Orange Line BRT stations, by bike, with the areas around them is a particularly good investment in making transit more convenient to people who might not yet be considering it. Towns should be looking at the small but potent alterations they can make to cul-de-sac communities and surface-lot-intensive business areas, such as more direct walking and biking paths leading to transit stops. 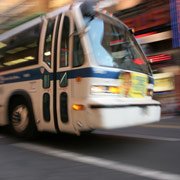 Smaller-scale transit that can actually work in tandem with longer-distance lines like new light rail or BRT can also be a real help for less dense communities, especially when “reverse” commuters are taking those longer-distance lines to work—one way that the Southwest LRT is meant to operate. Emeryville, California lies just off the Bay Area’s longer-distance BART train system, but in the 1990s it was starting to get passed by economically. A far-sighted collaboration between local government and businesses created a shuttle between Emeryville workplaces and the BART, to cover that pesky last leg of the commute. The businesses saw the clear benefit in being more accessible to employees, and they funded the shuttle through business improvement districts, which has kept it free to riders.

The bottom line is that there’s a solid array of options for working the last-mile problem, and by taking strong steps to deal with that problem, we will multiply the effectiveness of the transit network we already have. Park-and-rides are important, but the ideal transit system eliminates more and more of the need to even get in a car.