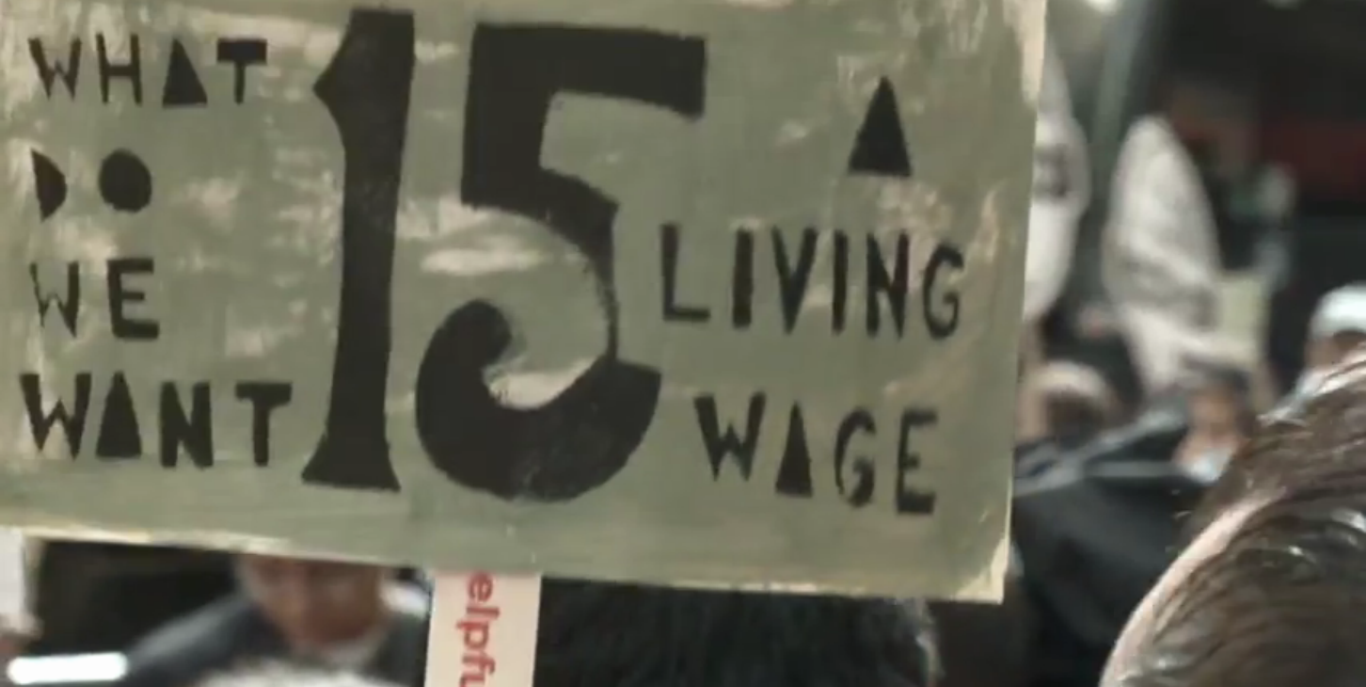 (Still from video below, courtesy of blackfridayprotests.org)

Low-wage workers in a variety of Minnesota workplaces plan a week of action Nov. 28 to Dec. 5 around demands for a $15-an-hour minimum wage and improvements in working conditions.

The day after Thanksgiving – “Black Friday” – has long been known as the largest shopping day of the year. But in recent years, it also has become an opportunity to call attention to the difficulties facing low-wage workers, many of them in the retail industry.

The week of events includes:

Friday, Nov. 28, 10 a.m. – Organized by OUR Walmart, Walmart workers and supporters will march outside the Walmart store at 1450 University Ave. W., St. Paul. They are calling on the corporation to publicly commit to paying $15 an hour and providing consistent, full-time hours.

Friday, Dec. 5, noon – Airport workers, community activists and supporters will rally for a $15 minimum wage at Minneapolis-St. Paul International Airport. The rally will be held in Terminal 1, Upper Level Roadway, across from ticketing

The actions will call attention to the fact that many working families are struggling while the nation’s wealthiest corporations and individuals are garnering record profits.

The janitors who belong to CTUL are employed by contractors to clean stores for Target, Sears, Kohl’s and other major retailers.

Last year, Walmart made $16 billion in annual profits and its owners, the Walton family, are worth more than $150 billion. Yet the majority of Walmart workers earn less than $25,000 a year.

“When I have no money left over for food I have to dig through my cabinets looking for old, non-perishable items just so I can eat something, anything,” said Walmart worker Cantare Davunt of Apple Valley, Minn., who just applied for food stamps. “I dream of being able to fill my refrigerator with fresh fruits and vegetables and eating hot, healthy dinners. But I go to bed hungry sometimes.”

Some jobs, such as those of ramp workers and baggage handlers at Minneapolis-St. Paul International Airport, once paid well. But the pay and benefits were slashed when airlines subcontracted the work and, in some cases, busted unions. The workers are calling on the Metropolitan Airports Commission to institute a $15-an-hour minimum wage at the airport.