Workers and their supporters from across the Twin Cities staged a demonstration outside the Verizon Store in Roseville Thursday afternoon as part of the Communications Workers of America’s “Verizon National Day of Action.” The demonstration drew more than 30 people, who held signs and banners warning consumers about Verizon’s corporate greed.

About 45,000 union members at Verizon, based on the East Coast, have been working without a contract since the previous agreement with the company expired in August 2011, resulting in a two-week strike.

Workers called off the strike when Verizon agreed to abide by the terms of the previous agreement while negotiating a new one. But so far, those negotiations have gone nowhere, with the company insisting on steep concessions from its workers, including cuts to their health care insurance and pension plans – even benefits for job-related injuries. 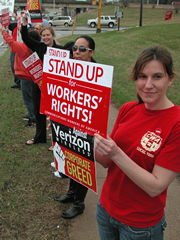 Although Verizon claims it cannot afford the benefits provided in the current union contract, the truth is the company is turning record profits.

The company is so profitable, in fact, that CEO Lowell McAdam recently tripled his annual compensation, from $7.2 million to $23.1 million. And while the company claims it needs to strip its union workers of their pensions and health benefits, Verizon’s top executives have taken home $258 million over the last four years.

“We’re concerned about Verizon’s corporate greed,” said Lawrence Sandoval, a CWA district representative. “They’ve made a tremendous amount of money. Their CEO is making tremendous amt of salary. The bottom line is they’re trying to pass on the cost of operating the company onto workers, while they continue to reap the benefits.”

Sandoval said workers inside the Roseville Verizon Store are not union members, and demonstrators did not attempt to prevent customers from entering the store. Rather, the point of the demonstration is customer education.

“We’re trying to persuade the public not to utilize Verizon,” Sandoval said. “They should switch to a unionized carrier like AT&T. And we’re trying to show that there is nationwide support for these workers out east.”

For more information on the Verizon National Day of Action event, contact Steve Lewsander of CWA Local 7201 at 651-774-7201 or Cwa7210@qwestoffice.net.