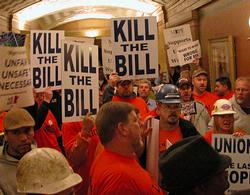 As state lawmakers at the Capitol held the session’s first hearing on a proposed Right to Work (RTW) constitutional amendment today, hundreds of workers from across the state – and across the political spectrum – demonstrated in opposition to the controversial measure, calling it unsafe, unfair and unnecessary for Minnesota.

Spectator seating for the 8 a.m. Senate Judiciary and Public Safety Committee hearing filled up quickly, as did three overflow seating areas established to accommodate the crowd. Many workers watched the proceedings, which lasted more than three hours, from outside the hearing room. Inside, the unrelenting chant of “Just vote no!” buzzed in the background, drowning out testimony as staffers and spectators entered and exited.

As expected, members of the committee voted 7-6 in favor of the RTW amendment, referring it to another Senate committee for review. As senators exited the hearing room, workers showered the senators who voted “yes” with chants of “Shame on you!” and “We’ll be back!”

The outburst of opposition, demonstrators said, is an indication of what’s at stake for Minnesota’s public safety, the state’s economy and the middle class if RTW becomes law.

“Today, working Minnesotans showed there is sizable opposition to this reckless amendment that puts Minnesota’s high quality of life at risk,” Minnesota AFL-CIO President Shar Knutson said. “Plain and simple, the more people hear about this amendment, the more they realize that it is a bad deal for middle class Minnesotans.”

Senators listened to two hours of testimony from economists, business owners and union members during the hearing. The testimony – and ensuing debate among committee members – reflected the confusion surrounding RTW.

In fact, current law says a worker whose job is covered by a collective-bargaining agreement is obligated to pay “fair-share” dues to the union – at a lower rate than membership dues – to cover only the costs of representation and bargaining. Under federal law, unions are required to represent and bargain for all workers subject to the contract – whether they are full members or not.

The thought of such an unfair structure disgusted Jenny Lundgren, a teacher in the North St. Paul-Maplewood-Oakdale district. Lundgren introduced herself to the Senate committee “as a teacher and as a Republican.”

“This law will force the union to represent non-members in discipline matters … at the expense of dues-paying members,” Lundgren said. “As Republicans, we are fundamentally against a free ride.

“Is it fair that I pay for (union) benefits and services while others get a free ride? At what point are we going to stop paying for those who choose not to pay for themselves?”

Andy Lindberg, a Republican member of Carpenters Local 68, agreed. “If working non-union is what someone desires, there’s nothing stopping them,” he said. “But there are no free rides, and no one should get something for nothing.

“What happened to the conservative principles of personal responsibility and individual liberty?”

Fairness was not the only issue opponents took with RTW. Workers and employers also warned that RTW, by eroding the collective-bargaining process, would put the safety of Minnesota’s families at risk.

For firefighters, police, nurses and other front-line workers, the connection between RTW and public safety is simple. When some of their co-workers don’t pay their dues, it becomes more difficult for nurses to bargain for safe staffing levels, or for emergency responders to negotiate things like faster response times and access to life-saving equipment.

Minnesota’s public safety unions often negotiate for the purchase of safety equipment, Metro Transit Police Sgt. Joe Dotseth said, including ballistic vests police wear while on the job. Dotseth asked, “How many of my brothers and sisters would not be here today” had police unions not bargained for bulletproof vests?”

“This bill is intended to and will cripple unions,” said Lt. John Delmonico, president of the Minneapolis Police Officers Federation. He likened allowing workers not to pay “fair-share” dues to allowing condo owners not to pay their association fees.

“How well do you think that would work out?”