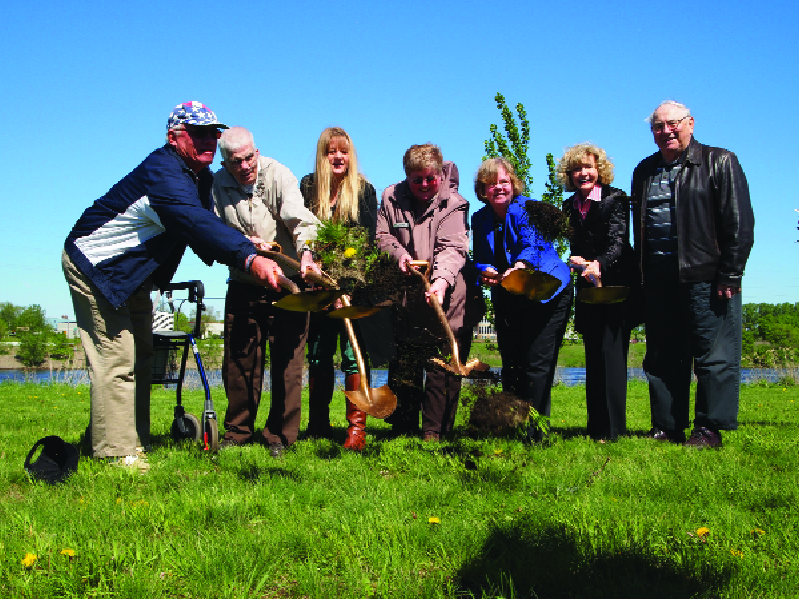 May 23, a ceremonial groundbreaking was held for the Sheridan Veterans Memorial at 1300 Water St. Others speaking in addition to State Representative Diane Loeffler included those pictured above.

Steve Bleedorn and Howard Weller, relative newcomers who helped the original Freedom Fighters veterans group, both recalled the monuments that had inspired “Mr. Northeast,” Ed Karbo, “one of the most patriotic and stubborn.” to pursue a local memorial. There is one in Little Falls on the banks of the Mississippi.

Weller said they “took that honor flight to Washington, DC to see the World War II memorial. It is awesome. This was Ed’s dream, and that trip supported him.”

Jenny Fortman, president of Sheridan Neighborhood Organization for much of the fundraising and organizing time, said she “learned patience and persistence from Ed Karbo. The artists and hipsters value as much as we, the sacrifices of many people.”

Fortman commented on the art that will be at the center of the memorial. “I see it as shields of protection, a world unifying with the spaces in between.”

Rob Smart, who lives in Northeast, is the artist, and Thomas and Company will be building the infrastructure.

The park will include concentric paths and markers depicting the conflicts Minnesotans have been involved in, as well as quotes inspiring thoughts about peace, rain/peace gardens, and an outer ring of trees. The central sculpture will be lit from within, and there will be three flagpoles and flags with lighting. 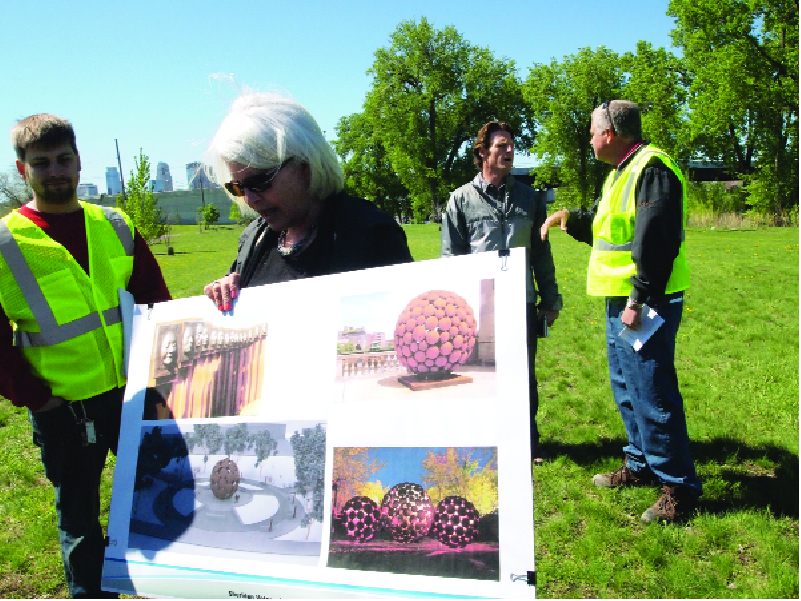 Parks staff Deb Bartels holds the rendering of the park and art (lower left) with similar past work by Robert Smart, in back in photo.

Below is a speech we reprinted from Representative Diane Loeffler.

“Today we join together to break ground for a permanent memorial to those who have served in war. Sometimes war seems the only way to counter tyranny, liberate the oppressed, or save the innocent.

Unfortunately, every war and every military effort has claimed many lives on the battlefield, some in post-war distress, and keeps many living veterans wrestling with scenes and feelings they had hoped to forget.

It is my hope that this will be a place of remembrance and renewal. The Veteran’s Memorial is a thank you to those that served, a tribute to those whose lives were lost or forever altered, and a living reminder of our hope for a world with lasting peace.

Like all successful battles, creating this has been a team effort. Initially a Northeast veteran’s memorial was the dream of a small group of area veterans who wouldn’t let it die in spite of many setbacks and needs for regrouping. They reached out, battled for sites, recruited reinforcements, overcame obstacles, and welcomed others into their ranks.

Sheridan, a small neighborhood without a park, was willing to adopt that vision, raise money for it and share their precious new park on the river with a meaningful major memorial. Today we celebrate the culmination of that effort—the design is finalized, the funds finally raised and the deal sealed. Well done, all.

As I look to the future, I see veterans coming here to ponder, to remember and to heal. Some will come alone with their memories. They’ll sit quietly and think of times past and try to sort it all out. Others will come in groups to admire the components and share stories. All will appreciate that this community carved out a place to recognize their difficult work and sacrifice.

I envision music and flags—a gathering place on Memorial Day that’s less somber than a cemetery and a better place to blend the many demands of that holiday weekend. A time to remember and tell stories of relatives who served; while walking its circular paths. Then those families will move on to enjoy each other’s company in fun activities and picnics in the park. For every veteran who has served far away from home remembers dreaming of happy family gatherings.

I see children running and zooming by on scooters, laughing. They’ll remind those who mourn and remember that there are children who have not known the scourge of war and that it is our job to make it possible that no child will know that terror.

I see the Peace Gardens as a reminder that fresh starts are available to all. It will be a reminder that in the midst of the chaos and rubble of war new seeds of hope are sprouting. Those seeds will bloom and may lead to better ways to promote respect for all and new ways to resolve conflict.

The Peace Gardens will be a continual reminder that we all have a role to play in planting and nurturing a more peaceful world. We can do that via how we interact with others, how we promote harmony and respect, and by how we communicate with leaders and vote.

“We the people” are powerful and this memorial and its peace gardens came about because “we the people” wanted it and worked for it. The accomplishment of this dream will inspire others who dream of other improvements to our community. Thanks again to all who contributed to reaching this milestone.”

Representative Diane Loeffler’s speech at the groundbreaking for the Sheridan Veteran’s Memorial, May 23, 2013.