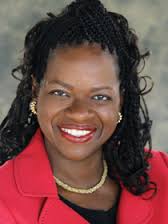 Barbara Arnwine has played a key role in advancing justice in the arena of civil rights. Arnwine has served as the President and Executive Director of the Lawyers’ Committee for Civil Rights Under Law for over 26 years. Within this leadership role, her stance has been strong and her commitment has been unwavering to secure through rule of law, equal justice under the law. One such example is her determination to protect one of our most fundamental rights— voting. She has waged war against the direct assault of democracy as evidenced by laws and policies which restrict access to the ballot box. For example, she has fought against the restrictive voter id laws. Did you know? Voter id laws serve as an active barrier for the 11% of voting age citizens, who lack a government issued photo ID. Ms. Arnwine is fighting to protect the rights of these 21 million citizens. Furthermore, she is a prominent leader in Election Protection which is the Nation’s largest nonpartisan voter protection coalition. Equal Protection plays a vital role in supporting and protecting voters. Moreover, in 2011, Ms. Arnwine and the Lawyer’s Committee began tracking suppressive voting legislation across the Nation which led to the creation of the well-known “Map of Shame.” This map provides an in-depth look at trends in voter disenfranchisement legislation.

Ms. Arnwine has positively impacted my life by modeling excellence in leadership and service in the community. The first lesson she taught me was the importance of lawyers serving as leaders. Leadership is about influence and leveraging this influence to plant seeds of social change. I still remember vividly in 2007, my law school, University of St. Thomas School of Law, hosted Ms. Arnwine as a speaker. I had expected to hear a lecture on the history of voting rights in the United States but instead Ms. Arnwine demonstrated how the past is a prologue for the future. I quickly realized that I was disillusioned about the civil rights movement. Like many, I had accepted the myth that the battle for equality was won and the promise of democracy was secured 50 years ago with the passage of the Voting Rights Act. Ms. Arnwine spoke truth to power as she challenged each of us to remain vigilant in the quest for justice in order to move from complacency to action.

Her message was clear that lawyers must pick up their mantle of leadership and finish the work of the civil rights movement. I left her speech with a renewed commitment to become a social engineer who creates new inroads to justice and freedom.

This takes me to the second lesson that I learned from Ms. Arnwine. As lawyers, we must have a passion for justice. Charles Hamilton Houston wisely stated: a lawyer as a social engineer is a “mouthpiece of the weak and a sentinel guarding against wrong.” Ms. Arnwine has lived this mission as she delivers a stirring call to action for all lawyers to take a stand in advancing equal justice under the law. She reminds each of us that we who believe in freedom cannot rest.

The third lesson is work on the ground. In order to create change, the community members must be informed and engaged. She uses a multimedia approach to raise awareness about injustices impacting communities of color. You can find Ms. Arnwine tweeting for justice (@barbs73), lifting her voice for justice on her Radio One broadcast (“Igniting Change with Barbara Arnwine”), and writing for justice in newspapers across the nation. Ms. Arnwine is a shining example of the key role women lawyers can play in society as gatekeepers of justice.