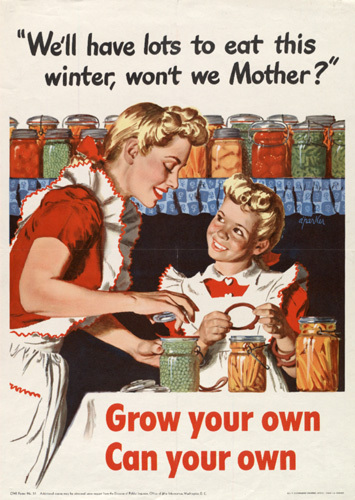 It was a poster from the Kittleson Collection on exhibit in the Minneapolis Central Library Hosmer Collection that spurred my reflections. The World War II-era posters depicts a loving mom and daughter, their gentle exchange as they plant their Victory Garden, the little girl‘s optimism as they work together to support the War effort. Peaceful, full of life and hope.

That, I realized, was the contribution of my mother and millions of other women to the War effort. Though we know the stories of the 36% of American women who shouldered heavy labor during the War, we overlook the fact that those women were also rearing families alone while their husbands and sons were fighting overseas

Even further buried in time are the stories of the two-thirds of American moms and wives whose legacy remains unheralded. Theirs was the day-to-day life of feeding, clothing, caring for a family, often an extended family, during the war. American women on the home front were valiant contributors to the War effort in subtle, domestic, ordinary ways that escape the notice of war historians and of the federal agencies that take a lead in promoting March as Women’s History Month. All during WHM I have found myself reflecting on their contributions.

At the outset of the War an article published in the New Republic advised readers that “For the coming year, at least half our productive effort must be spent making things that citizens cannot eat, wear, or live in – making things for military use.” (1)

Writing directly to homemakers, the popular magazine Good Housekeeping advised their readers that “every item of our apparatus…is now at our Government’s command.” Then GH calmly assured homemakers that “There is another obligation that we will recognize: that of being anti-hysterical.…We will try to remember that entertainment and instruction and homely advice must continue….While we are fighting to win, we shall try to know that love will stay in the world;…that life in American homes must go on and will go on.” (2)

GH need not have worried; these ladies definitely did not resort to hysteria. And they didn’t just cope. Women became active learners – learning to garden, to cook creatively, to sew, to sell not apparel but war bonds, to operate canteens, and to do those domestic tasks that had heretofore been classified as “men’s work.” The exercised creative heroism in an environment in which tools and household basics were at a premium and the local handyman was fighting for his country. 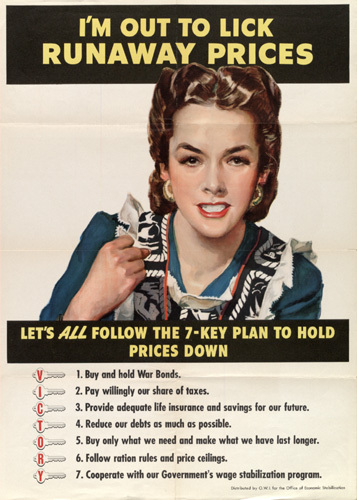 Rationing was both a puzzle and a mighty challenge. Food rationing was a daily reality – sugar, coffee, meats, fats including butter, fish, cheese are just some of the basics that were rationed. Substitute foods such as dried powdered eggs and liquid paraffin to replaced cooking oil were the order of the day. Meat, poultry and fish were all in short supply – even with the introduction of Spam to the American diet. Dependable refrigeration was poor and replacement was unthinkable, so most food was preserved in recyclable tin cans.

Rationing also covered tires, gas, bicycles, shoes, rubber, including rubber pants, the precursor of disposables, fuel oil and kerosene. Though milk was never rationed, canned milk became the household staple for families that lacked refrigeration when steel, not milk, was rationed. Ration coupons were the coin of the realm and penalties were strict.

Conservation recycling altered virtually every daily routine. Since plastic was not yet the bête noire of environmental conservation, the challenge was more basic – crushing and recycling tin cans to be turned into munitions, bottles returned to the milkman for reuse, saving cooking fat to make soap.

Victory gardens were not just for the natural food purist but the basic source of produce for the family dinner table. At one point during the War fifty percent of the nation’s vegetables were grown in victory gardens. To lighten the load women created competitions for the gardens and for recipes that featured produce from the backyard of community garden.

The War Production Board became the nation’s premier clothing consultant. They influenced the appearance of civilian apparel by dictating the conservation of cloth and material, changing the style, especially women’s garments. Weatherford writes that “adult clothing made its wartime adjustment primarily in the promotion of fashions that used less fabric, heedless of the implication that new fashion guidelines implied new clothes.” One story is that fabric rationing led to the design of women’s two-piece bathing suits which Neiman Marcus was quick to market as “patriotic chic” beachwear.

Women also led the volunteer front. The Red Cross, the Office of Civilian Defense, serving at recreation centers and canteens, and constantly pitching war bonds were just one of women’s routine tasks.

In spite of the fact that women bore the brunt of fighting the War on the home front, they had little or no say in the regulation-making process. Women ‘s involvement in the decision-making didn’t begin until the rules were in place and women were brought on board as volunteers to deal with the public and otherwise implement the rules.

Though my reflections on women on the home front will continue, my goal was to make the Women’s History Month deadline. Still, I’m eager to learn more about the stories that that those posters, preserved in the Kittelson Collection, dredged to the surface.

I’m now on a quest to learn more about a topic that has had such an influence on my personal life as well as the role of women. Doris Weatherford’s book, American Women and World War II, of which I read just the chapter on “The Normal Housewife in Abnormal Times” is my starting point. From there I plan to explore the rich collection of resources compiled by the librarians and researchers at the Minnesota Historical Society who have prepared a helpful guide to “Women and the home front during world war II, an excellent introduction to women’s changing role in the workplace and in the home. 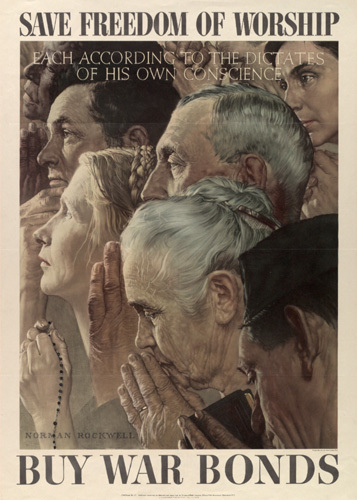 At top: Grow your own Cana Your Own