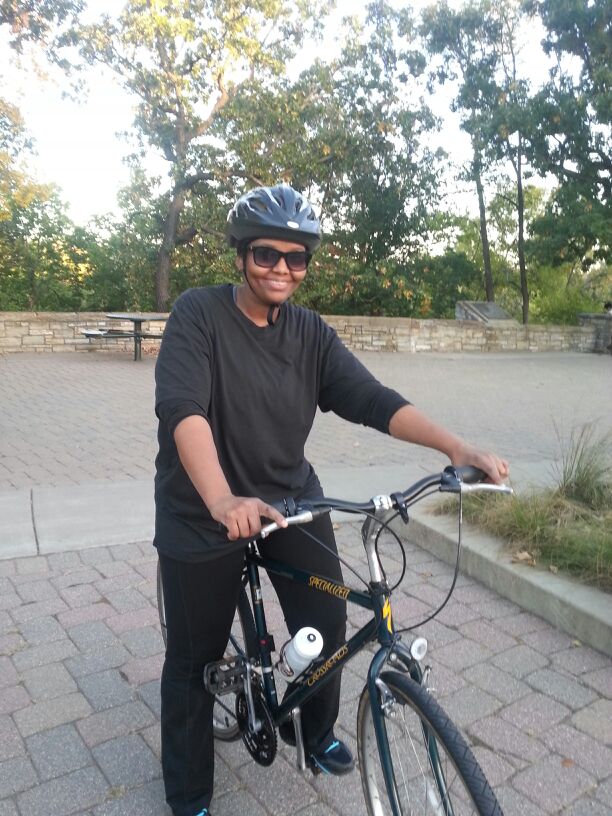 Fatima on her bike.

On a rainy Saturday morning two women are at bike work stations receiving hands-on learning about the ins and outs of bicycle mechanics. These two women are not white or Lycra clad, nor would you confuse them with the “creative class” that is associated with the biking community. They are learning bike maintenance skills at SPOKES Bike-Walk Connections (1915 E. 22nd Street) in the Seward Minneapolis neighborhood. According to their bulletin, this organization is an innovative community bike and walking center with a goal of getting more people biking and walking for transportation and exercise. On their wall is a picture of bicycle parts written in Amharic, Eritrean, Ojibwa, and Oromo translations.

Fatima Omer, a thirty-something Somali woman, is one of the two women working on a donated but still in good condition bike. She never rode a bike as a child. “I learned to ride a bike in July 2013 in the Learn-to-Ride Program and I liked it so much I wanted to have my own bicycle. I joined the Earn-a-Bike Program,” she said. The Earn-a-Bike Program participants are given a bike to keep in return for four weeks of mechanical training on how to maintain their bicycles.

Fatima has a goal to eventually commute to work, but for now is learning the Twin City bike trails. By riding her bicycle to work, she can reduce her automobile gas expense as well as, she said, be more conscious of helping the environment. “This is also helping me lose weight and biking is something you can do when you’re older, like me,” she said with a chuckle.

“In my community I encourage other women to ride a bike. It’s good for your health and you can save money.” For religious and cultural reasons, she covers herself. Fatima says she wears a long skirt but has on pants under her skirt for modesty and under her helmet a head scarf covers the hair. “I feel safe, I know how to fix a flat tire and have lots of fun riding my bicycle. I’m even going to try to ride my bike this winter! As long as it’s not too cold,” and with a smile she went back to working on her bicycle.

Hayat Ahmed, a thirtyish Ethiopian woman in the Earn-a-Bike Program, learned to ride a bike as a child. Earlier, she signed up for the Nice Ride bike loan program, supported by the City of Minneapolis and corporate sponsors, but wanted to own a bike. So, like Fatima, Hayat was diligently working on her bike learning how to check her brakes. “I really like riding the Nice Ride bike on the Midtown Greenway and around the lakes so I decided to check out the Learn-to-Ride Program to be a better bike rider. Then I wanted to learn how to fix a bike,” she said. “I ride a bike for cardio and endurance and maybe sometimes to school but my work is too far away.” Hayat’s family supports her efforts to ride and maintain a bike and besides she said, “I have fun plus I get my exercise!”  Hayat was modestly dressed in head scarf and long pants.

Women of color are beginning to see the health, economic and transportation benefits of bike riding. A recent survey by Twin City Greenways showed that people of color are interested in having safe places and connections for easier bike transportation as long as they have a say in the development process and are not pushed out of their neighborhoods.

FULL DISCLOSURE: Debra Stone is a bicyclist and a member of the Major Taylor Bicycle Club of the Twin Cities.

According to an NPR Code Switch broadcast, a recent report by the League of American Bicyclists cites people of color as the fastest-growing segment of the cycling population. Bicycle commuting rates and cycling groups are sprouting all over the country. There’s the National Brotherhood and Sisterhood of Cyclists, We Bike NYC in New York and Ciudad de Luces/City of Lights in Los Angeles and Major Taylor Bicycle Club of the Twin Cities to name a few. With the growing number of black, Latino and Asian cyclists in the Twin Cities women of color will be able to see themselves as part of the cycling movement as they pedal around town.