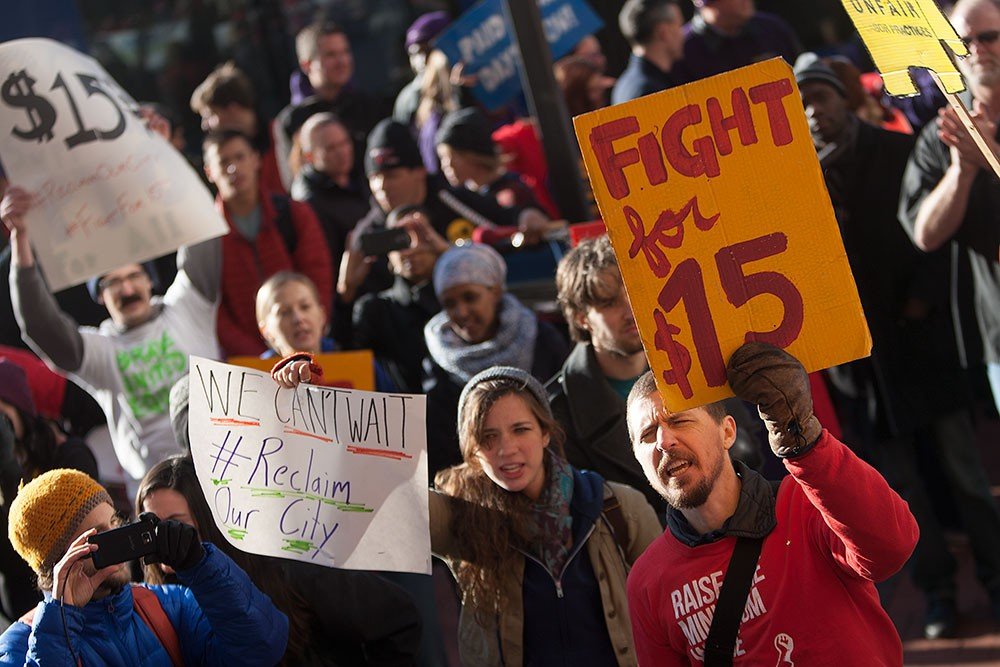 Justice for Jamar Clark has revealed Minneapolis’ racial equity gap in more ways than one. Even as the City Council majority, led by Council President Barb Johnson and Mayor Betsy Hodges, pushed to shut down the Fourth Precinct encampment, no proposals to address the economic devastation on the North Side or police violence were forthcoming.

As if we needed more proof that the City Council majority and the mayor have no real plan to address racial and economic inequality, in October the Council voted 10-3 to scuttle fair scheduling proposals. A proposal for paid sick days was sent to a committee where it awaits an uncertain fate. All of this is in spite of a poll showing overwhelming public support for city action to guarantee paid sick days and a $15 per hour minimum wage for all workers.

The poll, which appeared on the MplsWorks website in October (conducted by the Feldman Group), shows a stunning 82 percent support among likely Minneapolis voters for a $15 per hour minimum wage and 91 percent support for paid sick days. This is greater than support for clean drinking water, renewable energy and the Minnesota Vikings.

It’s clear that most city leaders listen to the CEO’s of the Minnesota Business Partnership, such as US Bank and the like. It is equally clear that they don’t listen to the thousands of workers who, under the MplsWorks banner, have rallied, marched and petitioned for months in support of fair scheduling, paid sick days, an end to wage theft and $15.

How can we overcome the resistance at City Hall and big business domination of city politics and make $15 a reality in a city that suffers from disturbing economic, racial and gender inequality? Municipal elections in 2017 might offer a way to bring more progressive minded council members into office, but that is two years away. And as the saying goes, “The rent won’t wait.” We have an emergency in our city that needs to be acted on much more quickly.

Workers and activists need to have a sober discussion about how we can bring existing, overwhelming popular support to bear to make $15 a reality in Minneapolis. A ballot initiative that would allow the voters to decide could be the way forward. A similar effort in St. Paul could succeed as well.

Big business will certainly dig in their heels, as they did around fair scheduling and paid sick days. The Minnesota Business Partnership will spare no expense to try to roll back public support for $15. Those in favor of a living wage and racial and economic equality will need to counter with our own fundraising efforts and bring an army of volunteers into the field. While none of this will be easy, the wind is clearly blowing in our direction. We just need to move our resistant political leaders out of the way.