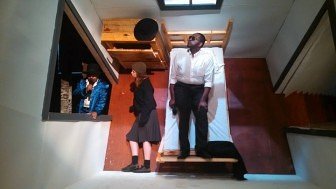 Flannery O’Connor at the Soap Factory; it’s hard to think of anything with more potential for a dark look at humanity. The show did not disappoint.

The show is an immersive opera. The audience follows the actors and the action through the clammy, creepy Soap Factory gallery. The orchestra performs all around the audience with traditional and nontraditional instruments. The actors move around the audience but they don’t seem to interact much. Partially because despite the intense action on the stage of the actors seem not to fully interact with each other, which I think would delight O’Connor.

There’s a line in the novel and the opera, where Sabbath Lily, daughter of the “blinded” preacher expresses an interest in protagonist Haze Motes…

“I like his eyes,” she observed. “They don’t look like they see what he’s looking at but they keep on looking.”

That sentiment is strong throughout the show. Martin Bakari, who plays Haze Motes holds that stares until the bitter end. He captures the intense restlessness of the character. He’s a scratch that can’t be itched and grows more intense.

Holly Hansen, from Zoo Animal, plays Sabbath Lily, she has an injured innocent stare, more innocent than the novel but suited to the performance. Her raspy pleading (and pleasing) sing-song voice was a great complement to Bakari’s strong tenor and Brian Major’s baritone. Major plays the blinded preacher; his voice and the makeup of scars were like magnets that drew you close – when really you know it’s safer to look away.

Jason Paul Andrews plays Enoch Emery. His eyes are lonely crazed eyes. Most of his performance is played in a box of eternal perspective. There’s a part where his solo scene plays as backdrop to the primary performance. You can see him growing madder by the minute, playing with a broken umbrella, while we works up the courage to kidnap the New Jesus. Great acting, maybe even better staging.

The sets by visual artist Chris Larson are amazing. They carry the theme of lots to see and not being really sure where to look. He creates boxes that use perspective to allow the audience to see into them as rooms yet the actors to easily move around. It’s as if the stage and sets were drawn with a child’s understanding of physics. Actors lay on vertical beds and hang their hats horizontally. There’s an MC Escheresque staircase between rooms, which gets used! And it all works.

The performance starts on a train with Gelsey Bell and Bakari. Bell plays a woman on the train and goes on to play the landlady and act as narrator. Her voice has an other-world feel but she maintains a calming aura. Because the original novel has been adapted, the narration jumps a little if you’ve done your homework and recently read the book (and I would strongly suggest doing so if you play to attend) you’ll notice some omissions and some reorganizing; the idea of a narrator helps guide the action.

So it’s a dark look at humanity in a clammy old factory and requires homework and it’s absolutely worth it.