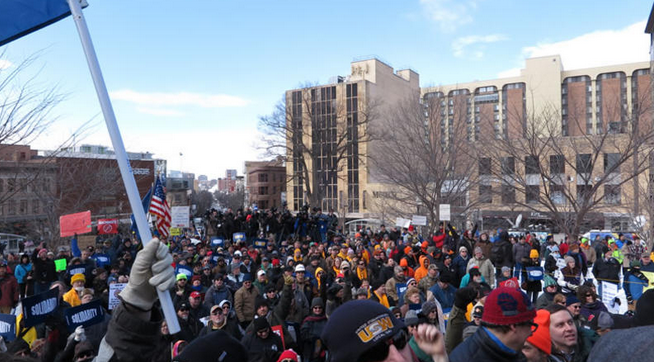 Protestors filled the streets Tuesday outside the state Capitol in Madison, Wis., as the state Senate passed Right to Work legislation. Photo courtesy of Wisconsin AFL-CIO

Trashing his earlier promises to provide a fair hearing, the Republican leader of Wisconsin’s state Senate labor committee rammed through a bill Tuesday that would make union shops illegal in the state. The bill passed in the GOP-controlled labor committee along partisan lines and moves on to the full Senate where the GOP has the votes for approval.

“So-called right to work laws do nothing to create jobs or close the wage gap,” former Labor Secretary Robert Reich declared at a labor-organized town hall in Atlanta as the Wisconsin workers massed in protest 800 miles away at the Capitol in Madison.

At 5:15 p.m. Tuesday, the GOP-run state Senate had finally allowed some minutes of public discussion on the latest GOP attack on labor. The angry members of the public in the Senate chamber had been waiting for their chance to speak since 8 a.m. and they didn’t get that chance until the early evening.

With Democratic Sen. Chris Larson of Milwaukee objecting to the obvious rush job, Republican Sen. Steve Nass of Whitewater gaveled the hearings to a close at 6:20 p.m., just over an hour after the public began testifying. So much for his earlier promises to the media that there would be fair and open hearings.

His explanation was that the police and later that a newspaper blog had warned him of impending disruption that would allegedly come from the peaceful thousands gathering to protest outside in  the Capitol and from the patient but angry hundreds who were inside waiting to testify.

When a few dozen workers who were inside erupted in profanities after being denied the right to speak, Nass went on radio immediately to use their outrage to justify the cutting off of democratic discussion.

Such is the blitzkrieg citizens in the once democratic state of Wisconsin face as the Gov. Scott Walker legislative majority pushes past the citizen comments and stakes out unions as the Judas goat to herd the state’s economy to slaughter.

It was a playbook taken right out of what happened in Wisconsin when the GOP killed collective bargaining rights for public employees a few years ago and out of states like Michigan where a GOP governor promised he wasn’t out to kill union shops but then turned around to do just that.  The real purpose Tuesday seemed to be to stir disruption so that any possible violence could be blamed on workers.

Workers were not alone Tuesday in objecting to the right-to-work-for-less steamroller. Interestingly, during the limited testimony that was allowed, some of the most powerful objections came from business interests.

Bill Kennedy, president of Rock County Companies, flew in from Florida to testify how right-to-work-for less would freeze him and all contractors into a state of uncertainty about hiring as well passing the costs of training onto the taxpayer. As it stand now, he noted, unions train his workers.

“What we need is a trained workforce not laws against that,” Kennedy said, visibly angry that right-to-work-for-less forbids employers to make labor deals or allow paycheck dues deduction. Non-union workers hoping for bargaining power and hundreds of small businesses are also opposed.

As GOP senators sat stone-faced, a staunch conservative from Green Bay, Patrick Kelly of the operating engineers, blistered them by itemizing how the bill would take funding away from 5th grade baseball, Masons, food pantries, and other activities funded by union wages and fees.

“What’s the hurry?” asked a Ripon resident who declared himself an agnostic on the bill.  “How does this help the job situation?”

Noted a member of the Painters union, “We have not been at such a place of income disparity in this country for generations – does anything in this solve that?”

“I just heard from a colleague that North Carolina has filed for bankruptcy,” testified Jeremy Waugh. “That’s a right-to-work state.”

“I give you guys credit for knowing how to use divide and conquer,” a Pewaukee worker told the three committee GOP senators.

The Republicans tried to give time to the pro right-to-work-for-less side, though Larson, after the first five hours, pointed out that no one had spoken for the bill who wasn’t connected to the conservative Bradley Foundation. “I’m here on my own,” responded an unemployed “construction worker” from Oshkosh, looking for an apology. After a phone call, Larson puckishly apologized – the speaker was actually connected to the similar Heritage group.

John Schmitt of the Wisconsin laborers took time to praise the businesses who testified but also stunned with the most meaningful statistic – comparing how his own union’s outlay of money for training was being diminished in right-to-work-for-less states.

“Congratulations,” a mother from Windsor told the GOP legislators in her testimony. “You have the votes and you’ll win! But just what have you won?”