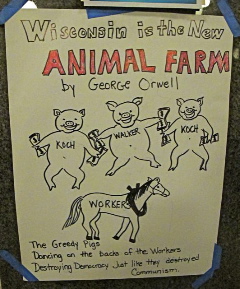 “Wisconsin is the new Animal Farm,” reads a sign on first floor of the State Capitol. “By George Orwell” the artist adds for those whose memories have a long jog back to eighth grade. There’s a lot to like about this sign. The Koch brothers and Governor Walker leer with porcine joviality, grasping bills that are bloated as feed bags, their money the only thing touching.

“Labor is not a commodity to be bought and sold– Labor is a means of self-expression,  the worker’s gift to the common good.”

I like the horse’s head carrying its heavy yoke, and the ear that looks like a thumb. I like the horse’s feet. It is hard to draw a horse.  My dad used to say that only a real artist could draw a running horse. The poster horse is walking, marching at most.  Probably, it wasn’t drawn by a real artist. It was drawn by someone who felt they had something to say, by a real person.  It might have been a kid, or some grown-up in the thrall of exuberant amateur creation. When enveloped in a project, you feel your youth.

This is what I want to say about what is happening in Wisconsin; people are showing up with the best they have to offer. The police are keeping order. The kids are drawing signs. The public works folks are making sure it stays clean. Teachers are back in school. Others march on their behalf, names of individual teachers taped to their down jackets.

In the book “Animal Farm,” the worker horse repeats, “I will work harder, I will work harder.” That’s the mantra the middle class had been told to chant since Reagan. Productivity is up and real wages are down in both private sector and public. I don’t remember how Orwell makes it all turn out in the end, but I don’t think it’s good for the horse.

We don’t have to be the horse. Wall Street’s been running the table since ’82 but Main Street is on the rise. Whatever the outcome, its good to be part of a protest that features literate signs.