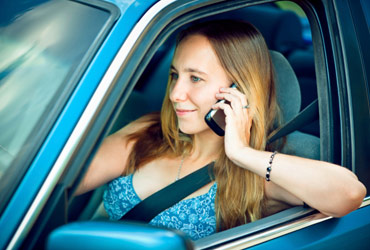 Firearms enthusiasts like to say that guns don’t kill people; people do. They also claim, arguably, that more guns in law-abiding hands will lead to less violent crime. Similarly, smartphones don’t cause traffic fatalities, but people using them unwisely sure do. On the other hand, “smartcar” wireless technology may eventually make vehicle crashes a thing of the past.

The National Transportation Safety Board (NTSB) raised hackles this month with a unanimous recommendation that states prohibit all use of wireless devices behind the wheel, hand-held or not. The move carries no force of law, but it could presage a federal mandate tied to highway funding, like those that dragged states into tightening drunken driving and seatbelt laws.

Given that no state has yet ordered all motorists to hang up and drive, Congress probably won’t go that route anytime soon. Even though an unscientific online poll suggests surprisingly broad support for the measure, it would be a tough sell at a time when traffic deaths and injuries are on a steep decline across the nation. Washington’s rules should get some of the credit for that, along with safer cars, safer roads, better emergency medical services and a long-term trend of less driving.

Meanwhile, however, distracted driving is increasingly implicated as a safety risk, blamed for nearly 10 percent of crash fatalities last year nationwide. That’s no surprise when recent studies show that 5 percent of U.S. motorists — 660,000 of them — are using hand-held cell phones at any given daylight moment. Most people admit in surveys that they phone or text while driving, although they also overwhelmingly say they feel very unsafe as passengers if their drivers do so.

Distraction from electronic gadgetry isn’t just a problem on roadways. It has caused deadly commuter train and marine collisions, as well as a 100-mile overflight by airline pilots working on their laptops. The New York Times recently reported on growing concerns over “distracted doctoring,” citing a patient left paralyzed after a neurosurgeon made at least 10 cell calls during his operation.

The first documented highway fatalities due to wireless distraction occurred nearly 10 years ago, when a young Maryland woman talking on her cell crossed a median, flipped over and killed five. Last year, in a case cited by the NTSB, a Missouri teenager who had sent and received 11 text messages in the previous 11 minutes rear-ended a truck at 55 miles per hour, starting a freeway pileup that killed two and injured 38, most of them children on school buses.

Repeated scientific studies have shown that phoning and texting drain attention from safe driving and increase crash risks at least fourfold. And it doesn’t matter where the wireless device is. What counts is how your brain is occupied, not your hands, NTSB Chairwoman Deborah Hersman said.

Critics often argue that talking with a passenger in the car must be just as dangerous, then. Not true, researchers say, because a passenger, unlike someone on the other end of a phone call, can assist the driver’s watchfulness for road hazards. Passengers also instinctively adjust their conversation to changing traffic conditions, studies show.

Without coercion from Washington, Minnesota and 34 other states already have banned texting while driving, on grounds that it takes eyes and thumbs off the task at hand more than chatting on the cell. A Virginia Tech study of commercial drivers found that texting, emailing and accessing the Internet multiply safety risks by a factor of 163 — 40 times the downside of just talking on the phone.

Governments have been less restrictive of cell-phoning by most motorists. Minnesota is among 30 states that have banned it for young drivers only, while just a few states have prohibited all motorists from using hand-held devices. But people in many walks of life have become dependent on cellular connectivity while they’re on the road, and spotty traffic enforcement in most jurisdictions does little to break those habits.

While we’re waiting for laws or evolving culture to direct our attention back to the road ahead, other kinds of wireless technology promise to make driving, or drivers themselves, largely obsolete. I recently reported on electronic communications’ role in reducing U.S. vehicle miles traveled, especially among tech-savvy young adults.

Furthermore, futuristic vehicle technologies aim to render drivers’ inattention harmless by warning them of impending collisions or even automatically braking and steering away from trouble. “The past several decades of auto safety have been dedicated to surviving crashes,” said Greg Winfree, acting head of the federal Research and Innovative Technology Administration (RITA). “The future will be about avoiding crashes.”

Already in traffic-packed south Florida, a $60 million state investment in highway information technology is directing drivers away from wrecks while also helping authorities clear them twice as fast as before. On Alligator Alley through the Everglades, speeders are automatically triggering roadside signs to warn them to slow down. Meanwhile, European researchers are working on a system to allow lines of cars to be linked wirelessly under control of a lead vehicle, shrinking safe following distances and easing congestion.

This all sounds wonderful. But, as transportation blogger Wayne Hanson wondered, “Will Americans accept sitting in their ‘freedom machines’ twirling a disconnected steering wheel as their vehicles turn, brake and accelerate on their own?”

Theoretically, that could eliminate crashes forever. But the consequences of system failure, familiar to anyone who’s logged onto a computer in the past 30 years, could be more deadly than anything wrought by human inattention. For the time being, at least, we’re going to have to stay focused on getting the most out of the software between drivers’ ears.