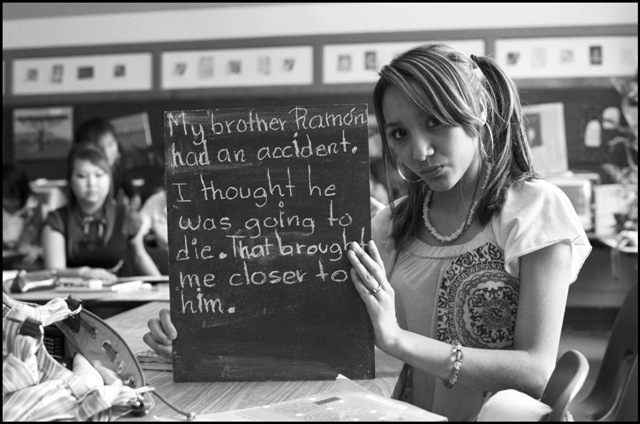 Award winning photographer Wing Young Huie has been revealing untold stories lingering in plain sight for nearly two decades. He creates intimate portraits of individuals from diverse backgrounds, presenting them in a very public way that draws attention to often-unseen faces. His projects in St. Paul’s Frogtown and Minneapolis’s Lake Street drew media and public attention to the lives of the people living in those areas. On May 1, his new exhibit, called the University Avenue Project, will turn University Avenue into a six-mile exhibit of 400 photographs displayed on shop windows, on sides of buildings, and other public spaces, and will incorporate community events and participation from neighborhood schools and organizations. 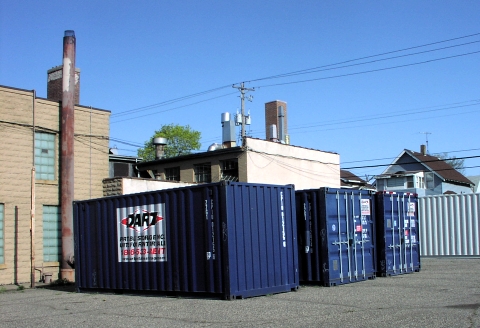 An exciting feature of the exhibit will be the Projec(tion) Site, a 40-foot-long rear-view projection screen, much like a digital billboard, that is held up by shipping containers in an empty lot just south of Hamline on University. The projection screen will display two simultaneous slideshows, playing at different speeds. Huie said that his choice to use shipping containers to hold up the screen was both practical and symbolic. The containers represent housing issues and also serve as a metaphor for transportation. “Minnesota has one of the most diverse populations in the country,” Huie said. Neighborhoods surrounding University Avenue in particular house communities from all over the world, and the shipping containers are a nod to that reality. The images projected on the screens will be accompanied by music composed by local musicians, which will add a layer of emotion, Huie said.

Presented by Public Art St. Paul, with the Projec(tion) Site curated by Steven Dietz of Northern Lights.Mn, the project is made possible with partnerships with local businesses, foundations, schools and community organizations.

The school partnerships have been in the works for over a year. One of the schools, Gordon Parks High School, will display billboard-sized photographs on its windows. Huie also conducted workshops in which he sent questions for students to think about. “What are you?” he asked. “How do you define yourself? How do you think others see you? What don’t they see? Describe an incident that changed you. What advice would you give a stranger? What do you think about race? What is your favorite word?” The students would take a portion of one of their answers and write it on a chalkboard. Huie then took their pictures. 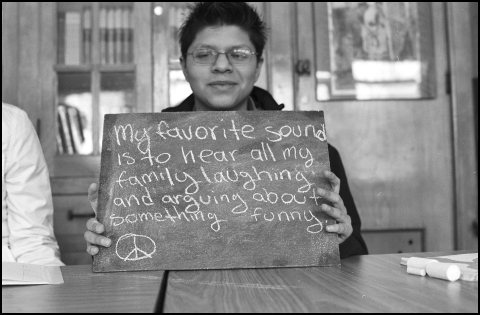 Huie hopes that the exhibit will provide a new landscape that reflects a truer reality than that currently shown in popular culture. The youngest in his family, Huie was the only one of his siblings who was not born in China. “I was formed by the myth and culture of Minnesota,” Huie said. His icons were Paul Bunyan, the Vikings, and Lake Wobegon. He said he’s trying to create a new iconography. “University Avenue is a microcosm of what we are becoming,” he said. Growing up, there was nothing like the images he’s presenting for him to see in popular culture. The only Chinese people he saw in the media were Kung Fu stars. “Students often don’t see their reality reflected in such a public way,” he said.

One of the schools that participated in the project is LEAP High School, which serves immigrant and refugee students pursuing high school diplomas. Amy Hewett-Olatunde, who teaches ELL at the school, said that her class brainstormed their ideas, and wrote about the questions. When they finished, they shared their writing with the others in the class.

When Huie came to the class, the students were very clear about what he was talking about and were able to share their ideas with him. “The issues raised were really about how they see themselves and how they identify themselves on a deeper level,” Hewett-Olatunde said. “A lot of the responses were really sad and tragic; they told of personal and familial problems that had or have been dealing with. They spoke of how they really wanted people to see them for who they really are.” Since the class already does a lot of journal/memoir and reflective writing as part of the curriculum, they students were used to “exposing their spirit and soul within these four walls” Hewett-Olatunde said, but she said that the experience helped her as a teacher learn how to connect with her students on a very personal level. 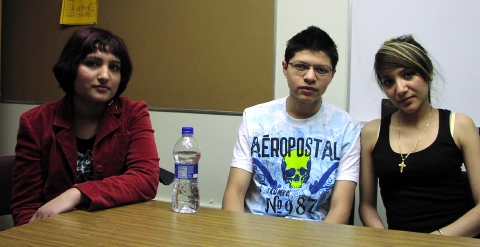 Petra Cardenas, a 17-year-old at LEAP who was born in Mexico, said that she liked that Huie was showing “normal” people, not just the people from T.V. “He wants to see what different people are doing,” she said. Cardenas said that though she lives in the United States, she wants to eventually move back to Sinaloa, Mexico, where she is from. First, though, she plans on taking Post Secondary Enrollment Options to get college credit. Cardenas said that her identity as a Mexican American was something that many people that are from the United States don’t understand. “We are different than Americans,” she said.

Erik Bazan, on the other hand, also from Mexico, wants to stay here. In his essay he wrote for Huie’s workshop, 17-year-old Bazan wrote about the fun that he had with his family hanging around the house, telling stories. Bazan plans to attend St. Paul College, where he will pursue a degres in information technology.

Leela Kaatiwoda, 20, from Nepal, said that she really liked the discussion her class had about identity and culture. She said that no matter what country they are from, “people are all the same.”

For the opening of the University Avenue Project on May 1, participants will be encouraged to walk the six-mile exhibit starting west from the Capitol or east from the KSTP Tower and ending at 1433 University Avenue for the the Projec(tion) premiere at 8 p.m. The exhibit runs through October 30.