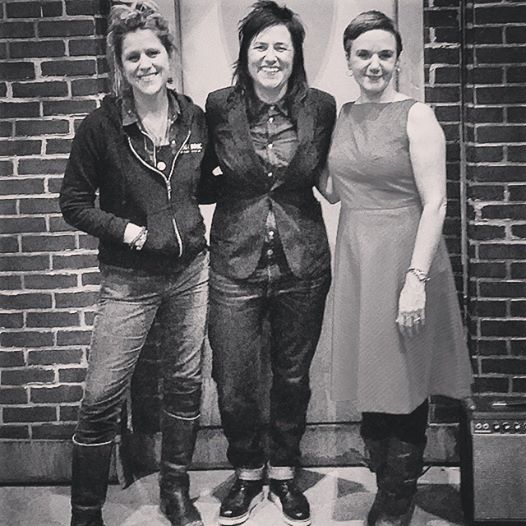 What could bring a parochial St Paulite to Anoka? Wine, Women and Song at the Lyric Arts, a one-night celebration of Minnesota women singers featuring Tina Schlieske, Molly Maher and Katy Vernon.

Although wine and beer are served, the Lyric Arts is a theater, not a bar. It seats about 230, creating an intimate atmosphere where the music is the singular focus for the audience. Each of the artists noted that it was a unique opportunity for them hear the music in such a concentrated mode –in front of a warm (but real) audience – say as compared to playing for a toddler and a dog as Vernon noted she had also done.

I had not seen Tina Schlieske live since she fronted Tina and the B-Sides. She shared through music and stories her life before, during and after life with the B-Sides. It was interesting to learn so much about her and the songs. She sang for an hour, including new and old songs, such as Barricade, which is a nice showcase for her voice, which is both raspy and clear and very controlled.

I especially enjoyed Hustlin’ Woman Blues, originally sung by Memphis Minnie, from Schlieske’s Evil Gal Blues album, an homage to blues women. It’s a down and dirty southern blues song and Schlieske belts it out as the song deserves. As an encore, she ended with Big Sky, which was a loudly and lovingly requested and enjoyed by the audience.

Molly Maher brought a country twang and herd of guitars to the show. I see Maher every month at Real Phonic Radio, but she rarely performs there. So this was a great treat. She played with Erik Koskinen. They obviously have an easy history that makes even the new songs feel comfortable to the audience. Maher has a nice, surprisingly low voice and she has a very entertaining stage presence but it’s really her guitar-playing that shines. She plays country songs like you listened to as a kid in the backseat of a road trip and like Keat’s negative capabilities, there’s a lot to understand in the heavy pauses in a song like On Your Way Out. Then there are also songs with no pauses like Monkey with a Tambourine that’s just a lot more pure story with dance potential.

Katy Vernon began the night with her ukulele, red party dress and London accent. Before I make this comparison, I feel like I have to say that I lived in London for years, so it’s not just the accent, but in just a few songs (like Five O’Clock) she was like a less poppy Lily Allen. But there was the same wit in a line like “five o’clock somewhere comes earlier every day” a line most mothers get. Vernon does seem to bridge a folksy country sound to pop sensibility.

The night was part of a Music in the ‘Burbs series, which continues next month (April 10) with Martin Zellar. Events like that might not be enough to get me to move to the suburbs, but it does show me another perk, which I’ll add to attached garages and proper stand-up showers.