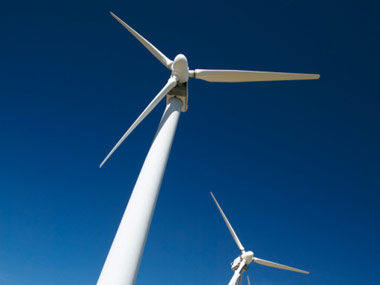 Much has been written here at Minnesota 2020 and elsewhere about what will happen to direct and indirect jobs related to the wind industry if the federal wind production tax credit (PTC) expires at the end of this year. Numerous wind-related planning, siting, construction and development companies around the country and in Minnesota have already announced or completed layoffs in anticipation of the wind industry downturn without the 2.2 ¢/kW credit.

One area that hasn’t been discussed as much is what would happen to electricity rates if the wind PTC expires. This is a difficult question to answer because of the complex system that gets electricity from numerous and diverse power plants to your home or business. One thing, however, is certain. The number of wind farms going up around the country will drop dramatically if the PTC is not extended.

One report from Synapse Energy Economics, an energy, economic and environmental research and analysis firm, examines the impact on electricity prices in the Midwest from increasing available wind power while decreasing the amount of coal power on our power grid. 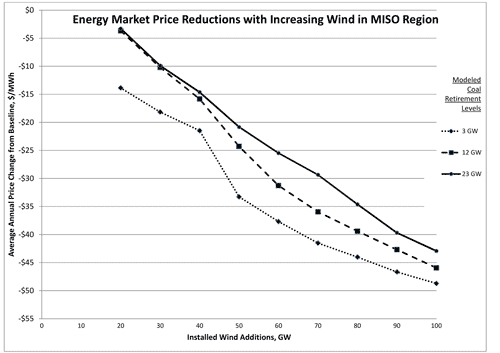 This graph shows how the price of electricity will drop as we replace more old, inefficient coal-fired electricity with wind-generated electricity. The trend here makes logical sense too. From an electricity purchaser perspective, such as an investor-owned, cooperative or municipal utility, wind energy has become one of the cheapest forms of energy to purchase on the spot power market, particularly at peak demand times. This is primarily because once the turbines are constructed there are no fuel costs that factor into producing electricity. And when the turbines are turning, power purchasers can tap into that cheap electricity source much quicker than firing up coal and natural gas plants for fast-demand electricity.

It is important to remember that the wind PTC impacts only the people and companies working to put the turbines in place and plug them into the electricity grid. The PTC does not directly impact anyone buying the electricity generated by the turbines. Also, the rate that electricity providers pay for juice is not the same price they pass on to consumers.

So if the PTC expired, rates may not be impacted in the short-term anymore than they would if the credit is extended. But it may cause rates to increase in the long-term if the expiration resulted in fewer turbines going up.

The price of delivered coal to Minnesota has increased 11.8% every year from 2004 to 2011, and natural gas prices likely have nowhere to go from here but up. So if there is less cheap wind to tap into in the future, rates will likely increase from where they are today.