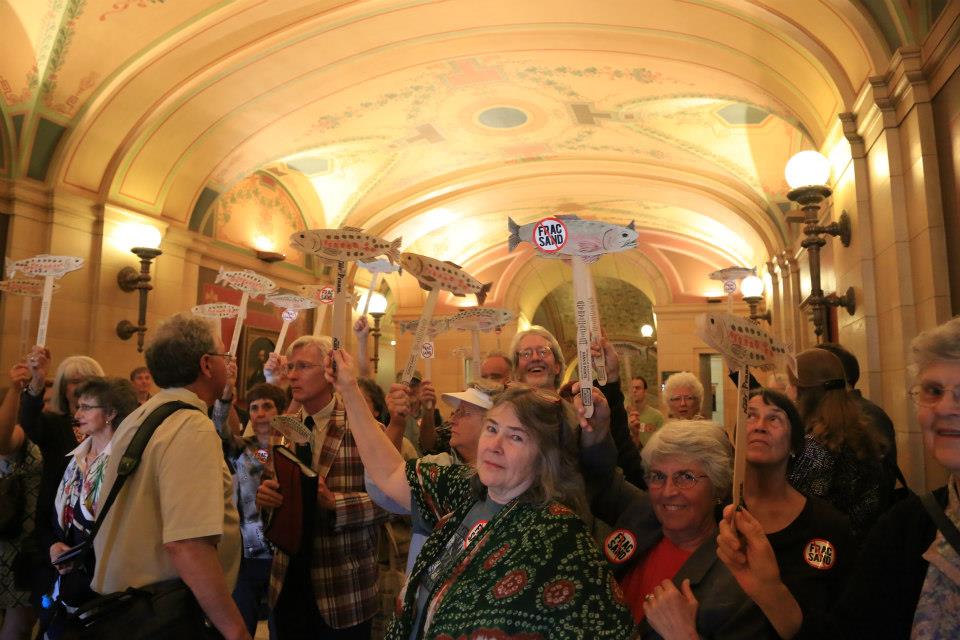 During last spring’s hearings on proposed frac sand legislation in the Minnesota legislature, industry and union lobbyists insisted that no new state rules were needed,since no statewide “one size fits all” regulation would do a better job regulating silica sand quarries than counties could.

Will a bill recently introduced in Wisconsin to loosen local control test that allegiance in Minnesota?

A bill that would limit the ability of towns and counties to regulate industrial sand mining has support from mining companies and some labor unions.

Backers of the change, like Scott Manley of Wisconsin Manufacturers and Commerce, say the mining companies need the change to protect themselves from the patchwork of local ordinances that have been passed in western Wisconsin to regulate frac sand mining. . . .

Labor unions like the bill because they say it will protect an industry that is creating jobs for their members. Terry McGowan heads Local 139 of the Operating Engineers Union.

These are jobs that offer family-supporting pay and benefits,” says McGowan. “These are good jobs that, thanks to the increase in demand for industrial sand in the past few years, has given many of our members who were out of a work a job.”

Opponents like Rick Stadelman of the Wisconsin Towns Association say if the bill passes it will encourage other industries to ask for protection from local ordinances as well.

“There will be a bunch of other industries that don’t want to work with local governments that will be running to you,” says Stadelman. “It will be the flood gates, as they always say, for industries.”

The Milwaukee Journal Sentinel had more Thursday in Sand mine bill hearing gets heated, while GOP senator expresses doubts:

Advocates for the fast-growing sand industry clashed with a host of groups Thursday over a bill that would limit the ability of local governments to regulate sand mines.

Citing changes brought by a recent state Supreme Court ruling, the industry during a daylong legislative hearing said local governments are putting too many conditions on operators of mines — powers that often should be left to state regulators.

But a key Republican senator, Dale Schultz of Richland Center, said he couldn’t support the bill and called for a nonpartisan study committee to conduct more research.

Schultz appeared to put up the latest speed bump for a bill that surfaced only last week and appeared to have momentum to bolster companies operating more than 100 industrial sand mines in western Wisconsin.

Sand from the mines has played a pivotal role in a resurgence of United States oil production by helping to extract hard-to-reach reserves.

Schultz issued a statement saying he feared the sand mining bill would remove local control over natural resources by turning it over to regulators in Madison. . . .

Senate President Mike Ellis (R-Neenah) also said this week he was concerned the measure would amount to “stripping local government from having a say” in overseeing sand mines. He said he couldn’t support the bill unless it is amended. . . .

The Dunn County News has more in Far-reaching bill stirs conflict over who should — and can — monitor mining.

In Minnesota, the first of three public hearings on the was held in Mankato. KEYC-TV reported in Frac Sand Public Comment Meeting Begins Regulation Process:

Mankato hosted one of three public comment meetings today to look at environmental and safety standards for the industry.

The Minnesota Legislature ordered the Environmental Quality Board to come up with a basic outline for what regulations of frac sand mining should look like. . . .

Most of the 50 people in attendance were either government workers or people in the frac sand industry, though a few remnants from the Jordan Sands opposition came as well.

Concerns range from the end result of the product, oil fracking, to environmental issues like air and water contamination, as well as health effects on people nearby.

Caroline Harrington says, “We’re putting the cart before the horse. They’re already starting the operations, but nobody has come forth with statistics that say how much silicon dust causes silicosis over what amount of time. That’s what nobody seems to want to tell us.” . . .

The next two meetings will be held in Southeastern Minnesota on Tuesday:

Photo: Southeastern Minnesota residents sticking up for trout last spring during hearings on measures to protect streams from mining.