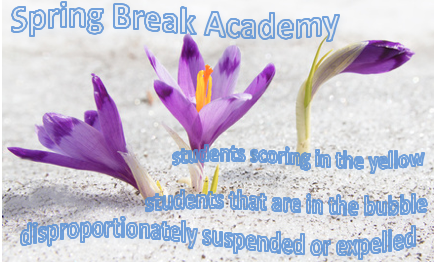 Minneapolis Public Schools (MPS) are targeting a number of interventions this spring, but the descriptions are confusing and sometimes contradictory. This is clearest in two descriptions of the Spring Break Academy, which offer different descriptions of which students will be invited — or allowed — to attend school and receive special help during spring break.

Read the other articles in this series:

Then in a second memo, the district said the program was for K-8 “students who in the past may have been disproportionally suspended or expelled.”

So what’s really going on? I emailed an MPS communications/public relations person:

“I have published two stories that connect to the short-term strategies and Spring Break Academy proposal. I will still work with the district’s POV, if anyone would like to get back to me.

“Can someone at MPS explain this change? Why was it implemented? Is this ‘behavior ed’ angle to replace the 2 hour original block of community ed work for students?”

“I hope it’s clear that the Spring Break Academy is an effort to provide more quality time to students to help them catch up—one, because students have missed 6-8 days of school this year and two, because we believe that more quality time is critical for many of our students. This is a momumental shift in the way MPS is looking at time—to use breaks and Saturday time in a whole different way that has the potential to expand in future years. Unlike most other districts, MPS took quick action and made an important investment for students.

So — who’s eligible for Spring Break Academy —the “yellow zone” students in grades 3-8, who might test as proficient on the Minnesota Comprehensive Assessments, if only they get four half-days of intensive test-taking preparation? Or the K-8 “students who in the past may have been disproportionally suspended or expelled?”