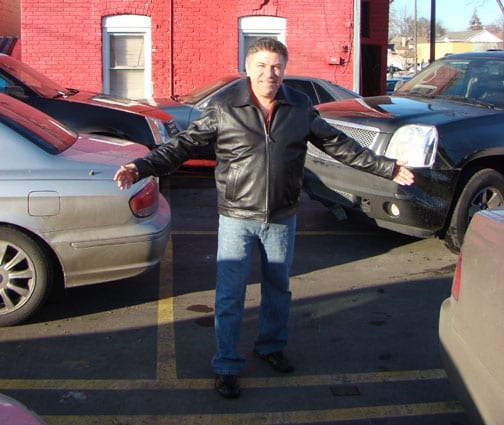 Mike Hatzistamoulos, owner of The Best Steakhouse on Victoria and University, is excited for the LRT - and for the parking lot refurbished with a Central Corridor loan.

Parking and access to businesses along the Central Corridor was the prevailing concern voiced at two open house style town hall meetings on Thursday, February 17.  The meetings were hosted by the Federal Transit Administration and the Metropolitan Council to gather feedback about the potential loss of business income during Central Corridor Light Rail Transit (LRT) construction.

The Metropolitan Council is currently developing a supplemental environmental assessment to determine the LRT construction’s impact on low-income and minority communities, and particularly on small business, as a result of the January 26 ruling by U.S. District Judge Donovan Frank on an NAACP lawsuit.

The University Avenue Betterment Association (UABA), an organization of area businesses along the corridor, organized a protest during Thursday morning’s town hall.

“We’re not against light rail. We’re simply against the method, the way it was designed, and the way it’s being built. It was under planned, and under budgeted from the start,” said Jack McCann, president of UABA.

He says a major infrastructure project shouldn’t be done on a low budget, and fears that the lack of planning around parking alternatives will result in significant financial loss to businesses along the Corridor – or that some may close down for good.

In a statement issued Thursday after the protest, UABA said:

In an email response to the statement, Craig Blakely, senior planner with the City of St. Paul Planning and Economic Development, has a different take on the situation.

According to Blakely, $2 million was set aside for a Neighborhood Commercial Parking Program to help mitigate some of the parking problems.

“Because we knew this was not enough to improve off street parking in the entire corridor, we identified 11 critical areas on University in order to concentrate the limited funding on the areas of greatest need,” he said.

Program funding restrictions required that assistance to businesses be in the form of loans, not grants, so the city offered loans that would be forgiven over a 7 year term. While businesses were encouraged to share parking, it wasn’t required to apply. To date, 50 applications were received, and ranked according to where city funds could make the biggest impact.

“Projects where property owners already had large parking lots but wanted to resurface them with our funds generally did not get funded,” said Blakely.

The city did not require a mortgage or personal guarantee as a condition of the loan, both of which Blakely said could of qualified as “difficult terms,” and presented real barriers to signing the loans.

That being said, with prevailing wage, insurance and two-bid policies, the 9-page loan agreement does come in at 26 pages with all of the attachments, which Blakely admits could be intimidating for business owners with language differences.

According to Blakely, of the 24 loans that were approved, only one dropped off, and the city is moving ahead to finalize the loan agreements on the rest.

A new parking lot, and a new chapter for the Best Steakhouse

Mike Hatzistamoulos, a Greek immigrant who has owned and operated The Best Steakhouse on the corner of Victoria and University for the past 25 years, is one of the first St. Paul business owners to secure a parking loan through the city. He described the lot behind his restaurant as “a mess” where maybe half a dozen cars could park.

“Now it’s got blacktop, yellow lines dividing the stalls. It looks professional – it’s really nice,” he said. The Best Steakhouse now has 11 parking stalls and the neighboring business Hatzistamoulos teamed up with has an additional five spaces.

While he’s satisfied with his new parking arrangement, he says the application was a bit daunting.

“They’ve got to make it easier on the paper work.  I had to hire a lawyer to help me figure it out. But the result in the end is that it came out really nice.”

He also took advantage of free marketing consultant services through the U7 project, available to help small businesses along the corridor “survive and thrive” the LRT construction. They helped him build a website for his restaurant.

Hatzistamoulos has seen his block go through many changes over the years.

“When I first opened this place, there was nothing but pimps, prostitutes and drug dealers on this corner,” he said.

Years of community work cleared that out, and while he had some initial concerns about how LRT construction would impact his business, he sees light rail as the next chapter in his neighborhood’s story. He’s excited about having one of the LRT stations at his intersection, and hopeful that it will bring new customers to his door.

“It’s going to be a little rough for about the first five, six months of construction, but in the long run, it’s going to work out for everybody,” he said.

“An additional $1.5 million in small business loans will soon be available to help offset financial losses due to light rail construction,” said Nancy Homans, policy director for the City of St. Paul, during the town hall.

The funding – $1 million from the Metropolitan Council, and $500,000 from the Central Corridors Funding Collaborative – will come in the form of forgivable loans for businesses that have done what they could to mitigate problems during construction, but still experience financial loss, explained Homans.

The money is not yet available, nor are the specific terms of the loans, until the federal government signs a full funding grant agreement. 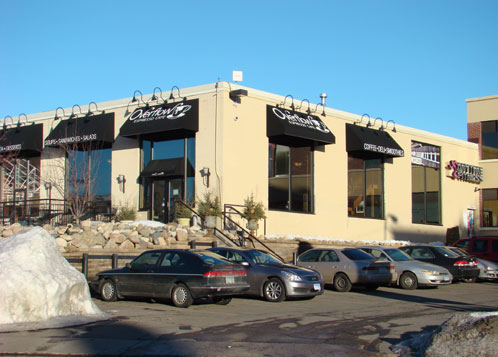 Barnhart’s property at 2929 University. He could stand to lose the front parking lot, pond, daycare center, and additional parking in back due to LRT construction. Photo by Sharon Rolenc.

What’s happening across the border

The City of Minneapolis currently does not have comparable parking loan programs available for businesses along the Central Corridor, but there are some business and real estate development loans available. According to a city official at the town hall, Minneapolis is in the process of bringing on a consultant to assess parking in Stadium Village and Prospect Park, do an inventory, and create recommendations for parking solutions.

One business owner who stands to lose a chunk of premium real estate doubts those parking solutions will help much.

Dave Barnhart owns several properties in Prospect Park. But his pride and joy stands at 2929 University.

When Barnhart purchased the property in 2005 he had heard rumors of the light rail construction plans for the train to turn at that corner.  He contacted regional planners to find out how it might affect the property.

“We were told the light rail wouldn’t be taking any of our property, because the turn at our street would be a soft angle,” he said.

After investing several hundred thousand dollars to make these changes, Barnhart was informed that LRT plans had changed.

“They come along and tell me the train’s going to take 20,000 square feet of property which wipes out the playground for the kids, the pond and 28 parking stalls,” he said.

Barnhart says he was assured by Met Council staff that he would be compensated well for his loss of property.

“Are they really?  I don’t know, I haven’t gotten the letter yet spelling out the details. But I doubt that they’re planning on giving me the type of money that would replace what I’m losing,” he said

Heavy construction for the Prospect Park segment of the LRT is scheduled to start in 2012.