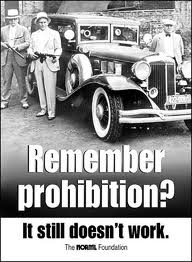 Voters in Colorado and Washington approved initiatives to legalize the personal possession and use of marijuana. (One in Oregon failed; it was apparently poorly conceived, and had little activist support.) It needs to be noted that the approval of such initiatives is one thing, and the actual law that ends up happening can be quite another. Ideally, said actual law would include the immediate release of everyone currently incarcerated in those states for non-violent marijuana “offenses.” Fat chance.

This article, by a federal judge, went viral some weeks ago.

If lengthy mandatory minimum sentences for nonviolent drug addicts actually worked, one might be able to rationalize them. But there is no evidence that they do. I have seen how they leave hundreds of thousands of young children parentless and thousands of aging, infirm and dying parents childless. They destroy families and mightily fuel the cycle of poverty and addiction. In fact, I have been at this so long, I am now sentencing the grown children of people I long ago sent to prison.

For years I have debriefed jurors after their verdicts. Northwest Iowa is one of the most conservative regions in the country, and these are people who, for the most part, think judges are too soft on crime. Yet, for all the times I’ve asked jurors after a drug conviction what they think a fair sentence would be, never has one given a figure even close to the mandatory minimum. It is always far lower. Like people who dislike Congress but like their Congress m0ember, these jurors think the criminal justice system coddles criminals in the abstract-but when confronted by a real live defendant, even a “drug trafficker,” they never find a mandatory minimum sentence to be a just sentence.

That specifically deals more with those incarcerated for methamphetamine and/or cocaine, but it’s all part of policy that is sick, demented, and vicious. I’m not suggesting putting meth and ‘caine on store shelves, not right now anyway, but we need to move a lot faster toward an entire overhaul of government restriction on personal choices. Colorado and Washington voters have just provided a beginning, if highly encouraging, groping towards sanity.

Marijuana is by far the least harmful (note that I didn’t type “harmless;” there’s always potentially a price to pay, if things get out of hand) drug that I’ve used, including alcohol. It was made illegal in the first place because of bigotry and political opportunism; it still is illegal partly because its association with the Sixties counterculture freaks out the disgusting dumb-a** rednecks, but largely because a lot of factions are profiting hugely from the “War on Drugs,” which has been, by any remotely objective standard, one of the most heinous and despicable manifestations of absolute stupidity in the history of U.S. public policy.

The question is how the federal government will react. Will it be smart and go “hands-off” in these states, or will it continue to try to enforce imbecile federal law? It’s all very unclear, right now. “”Legalization is not in my vocabulary nor is it in the president’s vocabulary” has been an oft-noted phrase, but there have been indications that could be interpreted, albeit with a perhaps rather optimistic lean, that somewhat more sensible policy is not impossible. Here is a good post-election article, that discusses many of the particulars and possibilities.

It will be an interesting and highly important matter to track. In the meantime, if you’re so inclined, “…look onto the rays of the new stoner sun rising…“