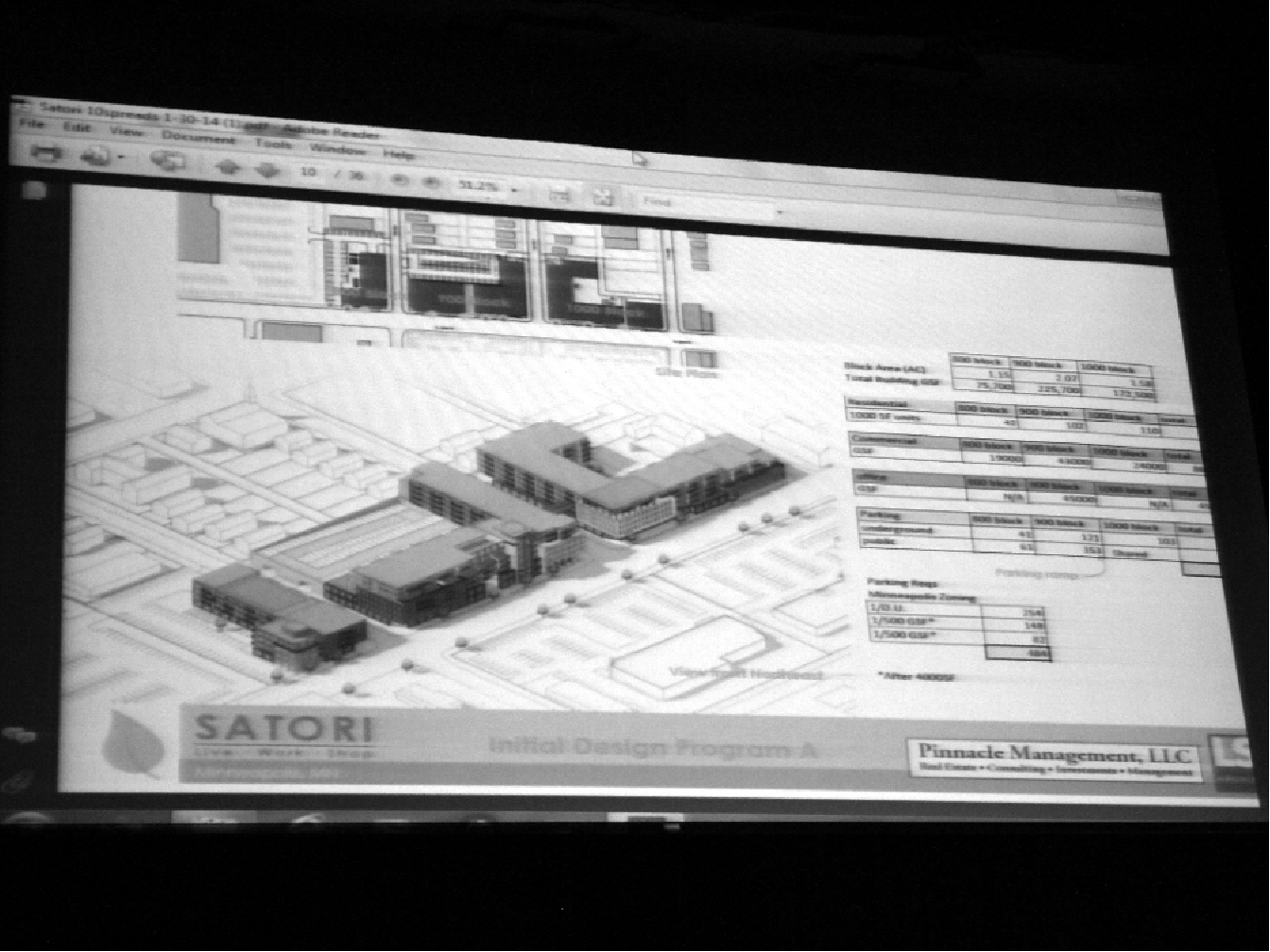 The smallest building, at left, would be the first phase of Satori, next to the Cub parking lot. A 300-car partly-underground parking lot is shown behind the middle (900) block. (Photos by Margo Ashmore)

It impressed even the people who opposed tearing down the last remaining concentrated blocks of old buildings on West Broadway to make it happen—though they said, “pick different blocks.” Tim Baylor’s proposed “Satori” project would bring 234 luxury apartments, office space, and retail that would serve the new residents and the community, to the 800, 900, and 1000 blocks of West Broadway’s south side. That’s from Cub, to Emerson Avenue.

Though they did not take a vote, the meeting, held at the Capri Theater March 18, was held on the typical night of a West Broadway Coalition committee meeting usually held at the McDonald’s restaurant Baylor owns. Paula Pentel, who runs the meetings, said this is the first, but will not be by any means the last, opportunity to comment on the proposal as it works its way along.

Baylor reviewed his history with McDonald’s corporation, first as their development scout charged with closing the troubled store at Plymouth and Penn, and then in charge of the new store he convinced them to build at Dupont and Broadway. Tim and wife Doris and son Justin have been active in West Broadway Business and Area Coalition.

Baylor reminded the more than 50 people who attended, that he managed to build 29 half-million dollar luxury condos on the river where the old Riverview Supper Club was with 75 percent under contract before it was built. He didn’t mention that the project was scaled back from its initial scope.

After a few years of development hibernation, he said he believes building a project of this magnitude as market-rate luxury housing would bring the density that is Minneapolis Mayor Betsy Hodges’ goal. And it could get Fourth Ward Council Member Barb Johnson the bakery she’d like to see on West Broadway. (Johnson was not there, he quoted a phone call from her.)

He invoked the name of Gov. Mark Dayton’s chief of staff, Tina Smith in a conversation where she asked, “what do you need to turn [the Northside] around?” And he said, “what would you want in your neighborhood? Good housing stock, safe streets, access to goods and services, good schools.” What anyone else would want, we want, he said. Baylor said there’s a resurgence of interest returning to the urban core, and there need to be economies of scale to make the vision believable.

The 800 block, adjacent to Cub, would have retail oriented toward Cub and apartments above.

The 900 block would have retail on first floor, office space on second floor and four levels of luxury apartments above. Baylor said there is “a national credit tenant” seriously interested in taking the 43,000 square feet of office space and wanting an additional 15,000 to 20,000. This entity may be interested in being a partner in the project, he said.

The 1000 block would be similar, and would have additional stories topping the American Indian Center, the one building that would be preserved, stepping down to meet the adjacent block at Emerson. There would be 300 stalls of underground parking (three levels of 100 each) on the 900 block, a pedestrian pass through and residential skyway to unify the 900 and 1000 blocks.

Baylor said he’s ordered a feasibility study to help him put his numbers together; he is estimating it’s an $85 million proposition at $106 to $110 per square foot to build.

Satori, Baylor said, is Japanese for “enlightenment” suggesting images of tranquility yet a stimulating environment, eco-friendly, beautiful and smart.

Baylor said he’s been talking to the 25 business and residential property owners who would be affected, and had recently sent each one a contract. The project takes up approximately a half block back from Broadway and involves nine residential property owners, some owner occupants, some rentals. The former North Branch library that Emerge is renovating behind the American Indian Center would stay.

In questions and comments after, several neighbors questioned why this plan is coming forward when the West Broadway Alive plan calls for preserving these last few intact blocks of storefronts from their era. That’s the early 1900s (1001 West Broadway was built in 1880, according to Hennepin County records). 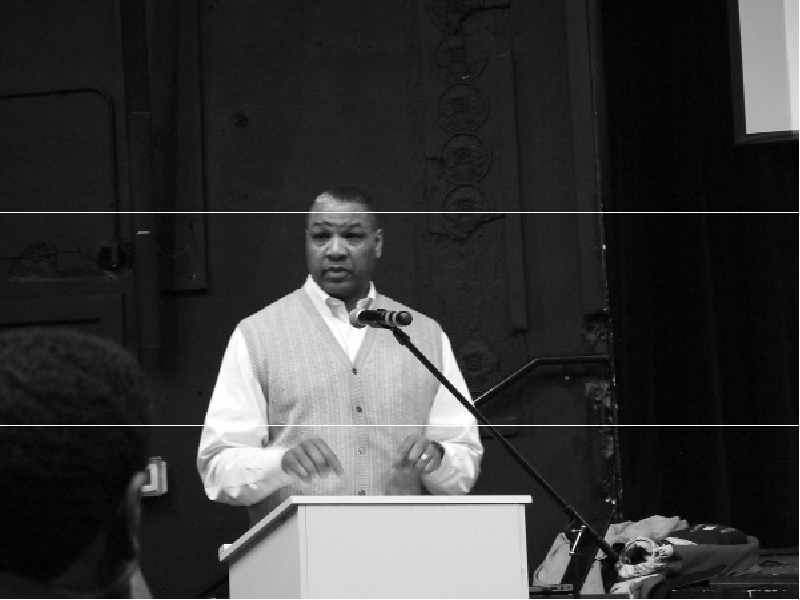 Baylor (left) said, “my charge is to make something happen.” He said the West Broadway Alive plan has not resulted in anything happening, and “if the end user doesn’t buy into it, what good is it?” though he backtracked later, “I misspoke if I said it does not have value.”

Brian Bushay of the Old Highland Neighborhood accused Baylor of revisionist history, saying that the residents didn’t want the McDonald’s on Broadway at the time. [Editor’s note: Many neighbors opposed the drive through and addition of any fast food restaurants.] Baylor said earlier that “Old Highland is one of the best neighborhoods,” and that the development would benefit from being connected with it.

Several residents lauded the project vision, but said it should go on different blocks – anything from “the curve” to “in place of the shopping center” that was built in the 1980s (Hawthorn Crossings) where the McDonald’s is now. Baylor said that to follow best practices in building density, old buildings are economically, functionally and physically obsolete and would not ever be able to command the kind of rents needed.

Kate Lee, who lives directly behind the proposed project welcomed it, saying, “until you live where I’ve lived…you can’t see why this is needed. We’ve been supportive of efforts regarding crime, and it’s hard to listen to people not wanting this change.” Several speakers, including Baylor, alluded to there being problem behaviors in the shopping center area.

A person who identified himself as a new American said he thinks the project will bring new life to the neighborhood and “attract people like myself. Go for it.”

Dean Rose, who also has a development project in the works, thanked Baylor for his commitment but asked, “what data leads you to believe it does have demand? Cost versus reality, our past experience has been to be overpromised and underdelivered,” such as in the 800 West Broadway project that failed completely [the proposal that hinged on a group led by Teresa Carr involving the YWCA]. Baylor responded that his feasibility study people “are probably tearing their hair out” but that if you build a vision big enough it’s believable. The Umami pop-up restaurant was successful.

Zoe Holloman, now with Appetite for Change, asked, having studied economic development in other cities, “will there be opportunities for people who are here?” She said chains don’t bring equity to a neighborhood, they move money around but it doesn’t stay here.

Baylor responded that some of the potential sellers want to stay in business and “may want to play” as partners. He also wants all the potentially displaced businesses “to come to me” rather than (to Keith Reitman’s question) going elsewhere on West Broadway. That last remark may have been tongue in cheek.

Baylor said an advisory committee would be formed, and a civic engagement committee. “There will be a lot of heavy lifting, right, dear?” nodding to wife Doris, sitting alone in the first row, nodding back.