“Fun is good.”  Since 1993, the St. Paul Saints and their fans have lived that mantra at every game.  They now want to share that mantra with Lowertown, with plans to build a new stadium in Lowertown.  Some Lowertown residents are enthusiastic, but others fear that a stadium would negatively impact the unique character of a neighborhood they love and enjoy

As the birthplace of St. Paul, Lowertown was a busy commercial port as the railroad industry shaped the neighborhood in the 19th century.  Its massive Romanesque-type warehouses witnessed dark times of abandonment and decay, during the mid-twentieth century.  Between 1979 and 2006, the independent Lowertown Redevelopment Corporation helped set the tone for revitalization, emphasizing balance between commerce, sustainability, and community engagement.  Lowertown evolved into a true “urban village” known for the popular spring art crawl, its high percentage of working artist residents, and its bohemian feel.

Today Lowertown stands on the precipice of another transformation.  The rebuilding of the Lafayette Street Bridge, the installation of the Central Corridor LRT, plans to further develop Union Depot and possible additional expansion of the Farmers’ Market, are a turning point for Lowertown. Already, the Central Corridor Light Rail Operations and Maintenance Facility (OMF) now rises up directly across the street from the Farmers’ Market.  The proposed Saints ballpark would sit adjacent to the OMF on Broadway. 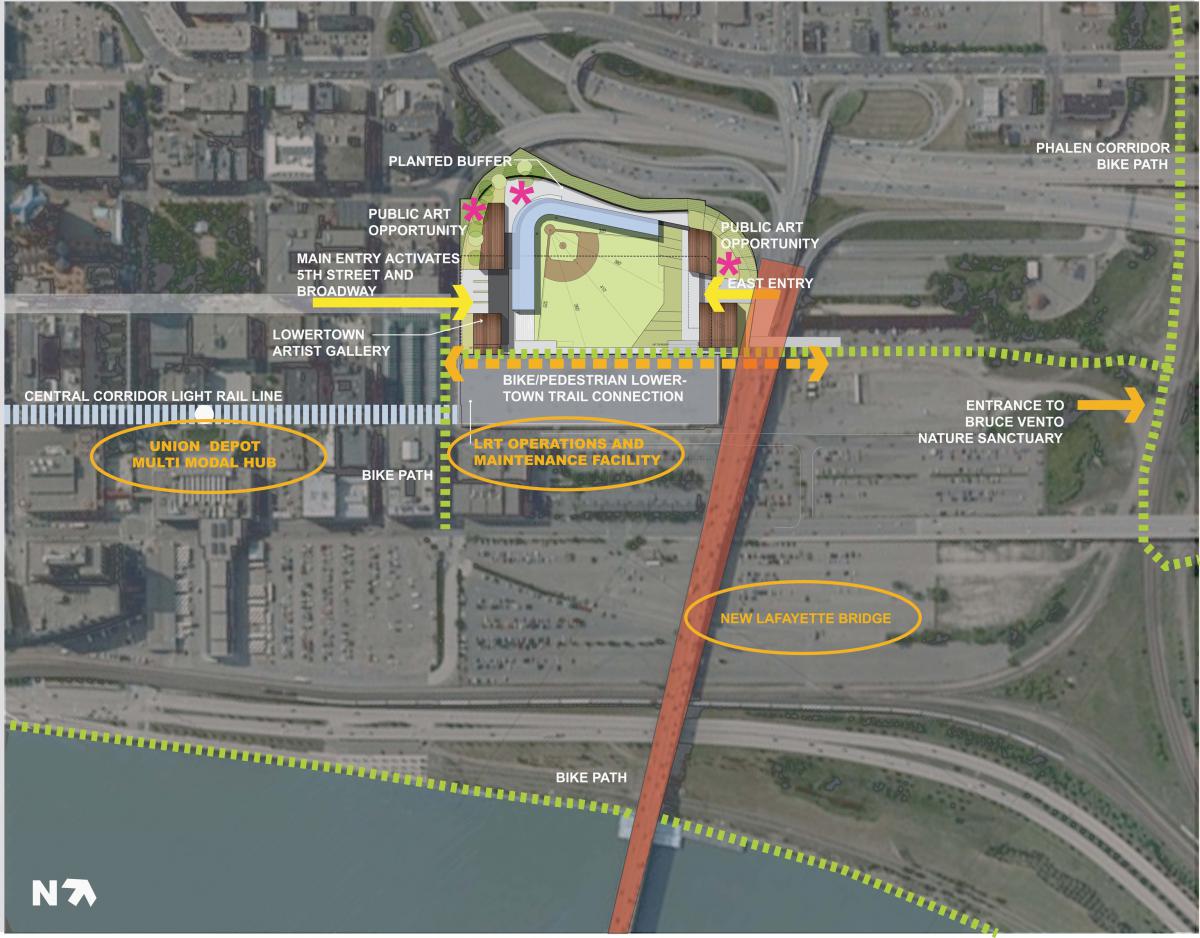 While no formal studies have been done as to potential economic gains, a ballpark is sure to pump massive dollars into the neighborhood and provide jobs.  Matt Kramer, President of the St. Paul Area Chamber of Commerce, describes the ballpark as the Chamber’s “number one legislative priority” and notes that the time is right to turn Lowertown into a destination.

This goal has some of the residents worried.  “This neighborhood has grown from the roots up,” said Rhea Pappas, vice president of the St. Paul Art Collective, “and we are afraid we will lose that.”  Pappas’ combined studio and home sits in one of the converted artists’ warehouse lofts on the corner of Prince Street, giving her a bird’s eye view of the noisy OMF construction and, presumably, the proposed ballpark.  “There is no McDonald’s here, no Target, and I am afraid for the local businesses,” she said. “I don’t want them to be driven out.”  She also described how several of her neighbors, some artists, will move out if the ballpark moves in.

The “Soho Syndrome,” was also considered when redevelopment planning began in 1979.  Artists, searching for economy and space, take up residence in places considered undesirable by other home seekers.  The warehouses of Lowertown were a prime example, industrial and ignored.  Once an area becomes known as an artists’ hub, the drive toward the hip, fun and creative atmosphere increases prices, which changes the feel and spurs artistic drain.

Justin Busch, a composer and president of the Northern Warehouse, thinks the Saints project is not a good fit for Lowertown.  His window overlooks the OMF and would be directly across the street from the ballpark.  He noted that support for the project grows geographically away from the proposed location.  The noise, lights from nighttime events, demand for parking, and the possibility of another freeway ramp are all considerations that Busch feels have not been thoroughly considered.  He also fears exodus of the current artistic community, citing lack of long-term vision in consideration of a ballpark addition.  The 16-member Greater Lowertown Master Plan Task Force, charged with developing a long range plan, has taken no position on the ballpark.  While the Saints have been upfront and straightforward, Busch is less enthusiastic about involvement at the government level.  Not long ago, the project was an idea; now, pending funding, it seems very close to implementation.

Tom Whaley, Saints executive vice president, says that, “Our goal has not been to build a brick and iron thing with no soul,” noting that the smaller scale of the facility would be part of its charm.  The Midway ballpark, built in 1982, has been described as crumbling.  The Saints will include displays by local artists in the new ballpark, another part of their tradition.

Whaley recognizes that the support of the surrounding residents is key and the team has been actively reaching out to residents.  Roughly two-thirds of events at Midway are amateur and he says the team is committed to the same approach.  The city will be the owner of the ballpark and contribute $10 million with the Saints chipping in another $10 million but the $47 million project needs another partner.  While the request to the state was for $27 million, the governor’s bonding bill included $20 million and since then, other funding ideas have appeared.  The bonding bill was not passed during the regular legislative session, but Whaley is hoping to stay involved during the upcoming special session.

“I do think that the Saints would be good neighbors and add to the culture of our downtown. I know the ballpark would be used by many groups and schools,” said Rose Marie Felsheim, a 30-year resident of Dayton’s Bluff and local artist.  She holds season tickets for the Saints and is one of many Lowertown residents who welcome the facility.  “We need the update.”

Change is inevitable for the urban village of Lowertown, regardless of the presence of a ballpark.  The size, scope, and ambience of that change is up for grabs.