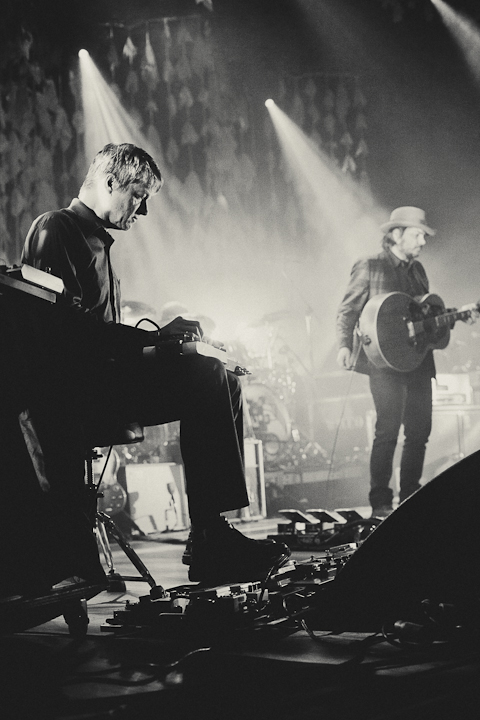 The crowd gathered in the bar area of the State Theatre on December 6th hastily downed their seven-dollar glasses of cheap wine instantly met my expectations for the imminent Wilco show. There were brunette men with shaggy hair and beards as far as the eye could see, looking simultaneously excited to see their very favorite band but also prepared to get all emotional thinking about the songs that reminded them of their ex-girlfriends, or something.

Upon entering the theater, already dimly lit to set the mood, I saw more of the same. The place was packed with lots of thirty-something dudes wearing ill-fitting jeans (apparently unaware that our generation wears their jeans painted onto their skin). Elsewhere, couples huddled in NorthFace and anticipation.

The stage was decorated with a gorgeous and almost spooky frame made of hanging fabric balls that kind of resembled tiny ghosts or hibernating bats. As Wilco began to play opener “One Sunday Morning,” a multicolored laser-and-lights show began, reflecting off of the little bats in truly captivating ways. The music matched the visuals; the intricacies of the piano delicately dancing over the guitars made it sound like the instruments were flirting with each other, and the crowd was feeling the love, nodding more exaggeratedly as the song wore on.

And wore on it did, for what seemed like ten minutes. Though the song itself was lovely and intriguing, it dragged on to a super long outro, and then, if that wasn’t enough (which apparently it wasn’t for the crowd, which by now was bobbing like a bunch of aging hipsters on a turbulent airplane), it followed with an additional instrumental reprise.

This seemed typical for Wilco, as beautiful, swelling songs proudly featuring lead singer Jeff Tweedy’s powerful vocals would eventually fade out into minutes-long instrumental jams. As the band members writhed and head banged under the schizophrenic, pulsing lighting, the music built to what could really be considered arrhythmic noise. This plus the prevalence of flannel and thinning hair on stage made the band seem like Phish if they came of age in the 90s. Alternate metaphor: Wilco’s live show could be the cool dad of Animal Collective’s.

Yes, there was something a bit … aged about Wilco, which shouldn’t really be a surprise for a band with nine studio albums that’s been active for more than 15 years. At one point, as a rainbow pattern of lights washed across the stage in a lagging, swirling pattern, it appropriately reminded me of a screen saver from Windows 95. However, even if they don’t have the most progressive sound in the indiesphere, they have certainly found a formula that works for them and that has made enough devoted fans with more traditional indie rock taste to sell out two nights at the State.

Perhaps the greatest fan reaction came during “Misunderstood” which began acoustically and without the accompanying musicians you could hear nearly every fan singing along. At one point during the song, Tweedy crooned, “Do you still believe in rock and roll?” and the crowd went wild. A similar screaming reaction occurred when he sang the lyrics, “You know you’re just a mama’s boy/positively unemployed,” (though the reaction was less wide-spread, probably because everyone else was a married townhome owner).

I found it to be particularly ironic to hear Wilco proclaim how misunderstood they were; it’s not like one million affected college bros don’t have your lyrics on their Tumblr bios. However, I’d venture to guess that it’s that very sense of loyalty—the fact that Wilco fans truly feel as though Wilco understands them—that has made the band so successful, that filled more than two thousand seats with people who were so enthralled they looked like they were participating in some kind of evangelical church service.

Indie music fans who are looking for a more eclectic (read: electronic) experience may find the show a bit unmoving, but fans of traditional indie rock—or people just looking to go to a generally really, really good live show—will not be disappointed by Wilco. 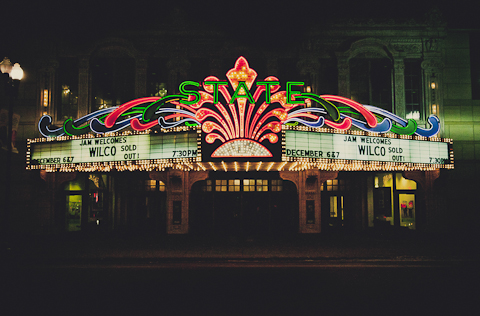 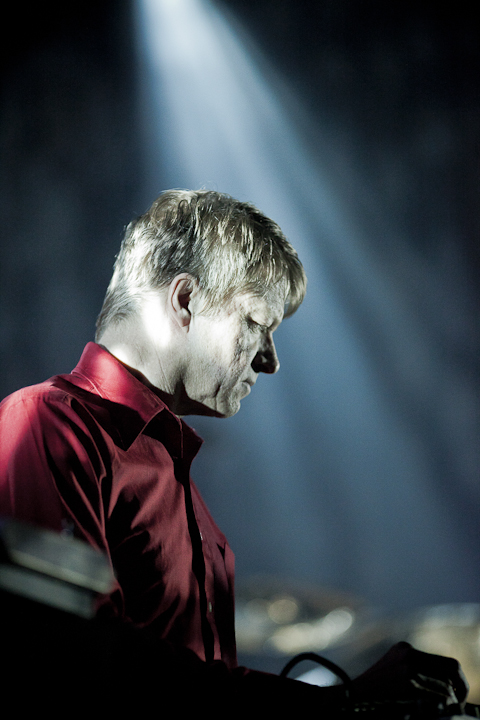 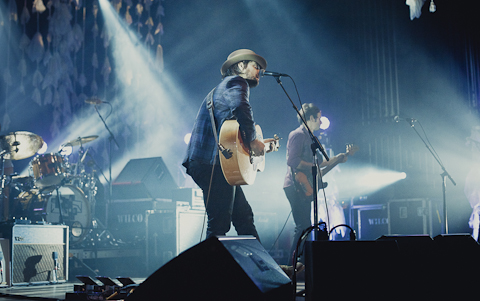 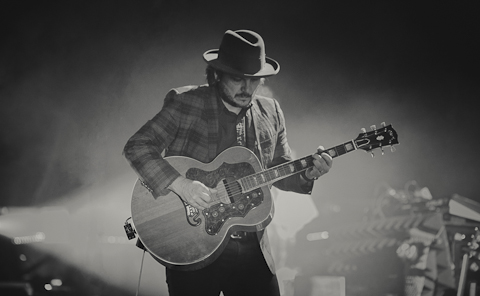 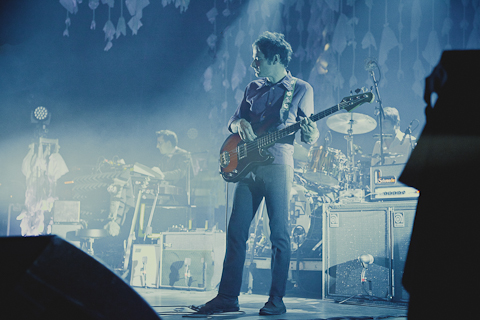 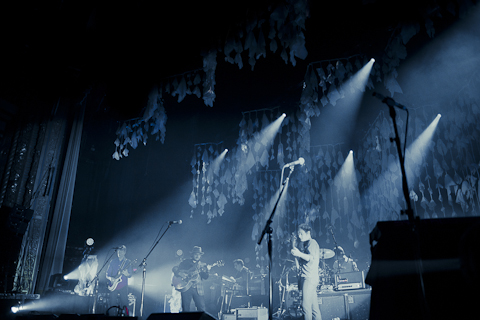 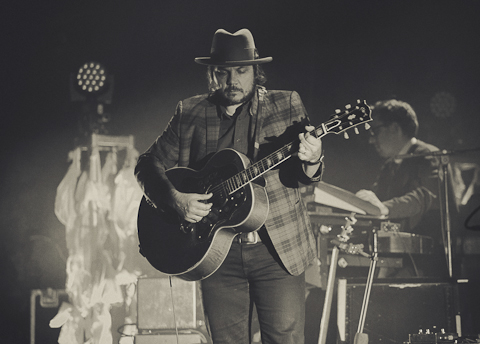 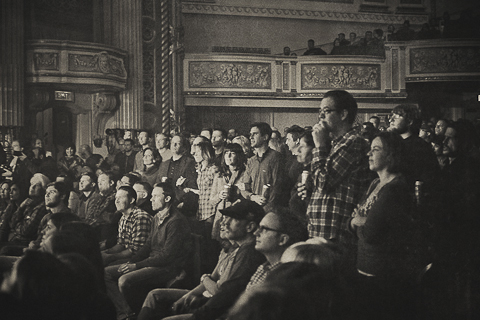 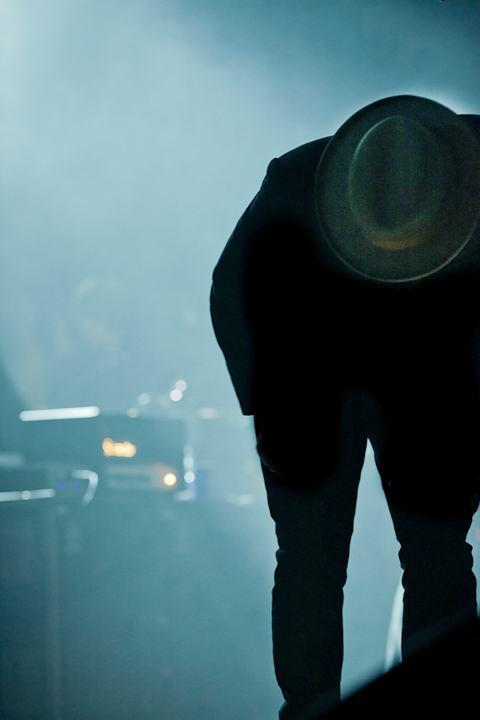 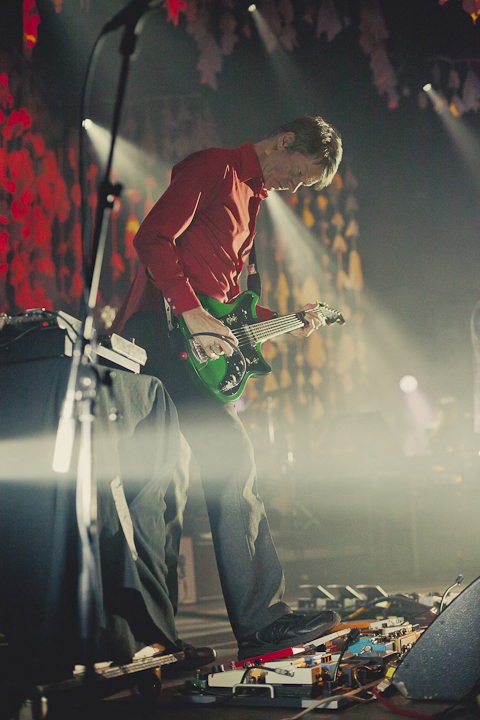 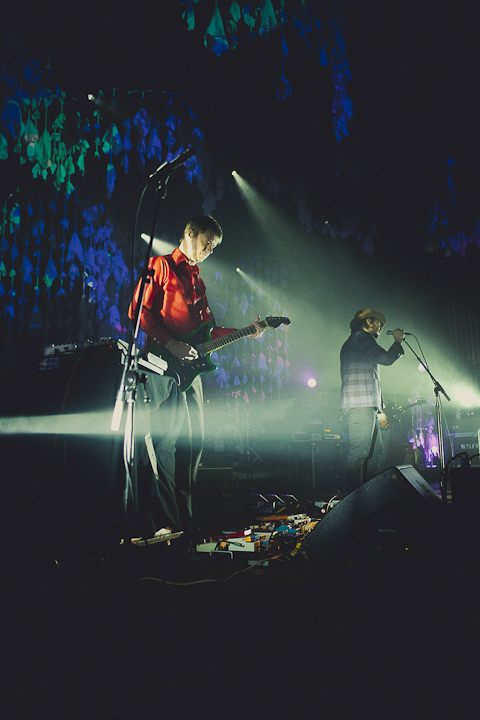 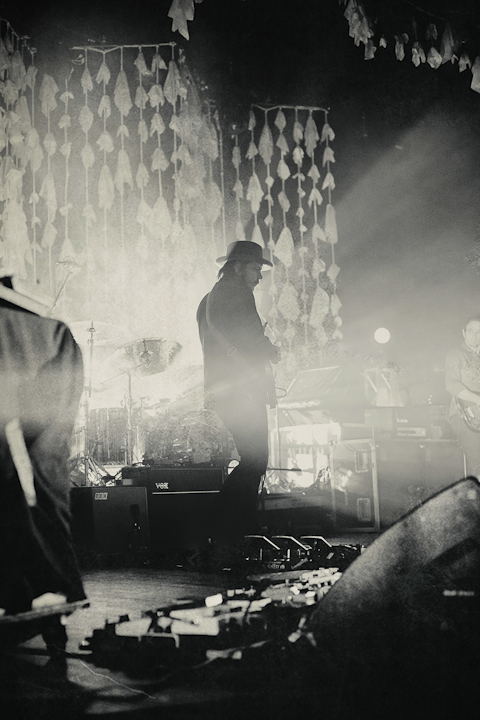 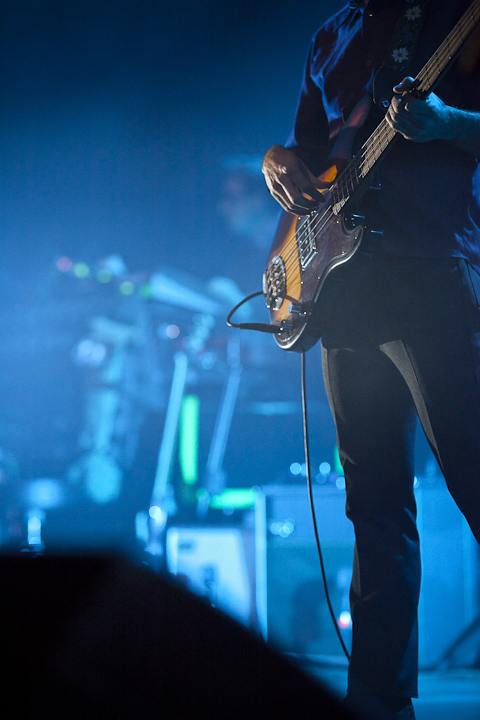 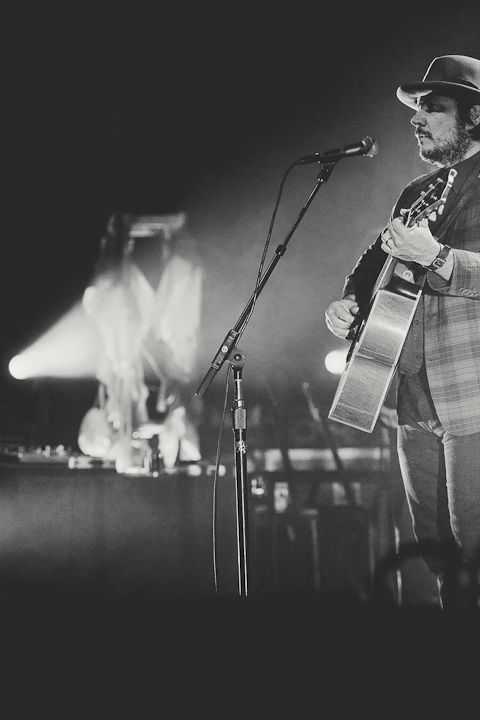 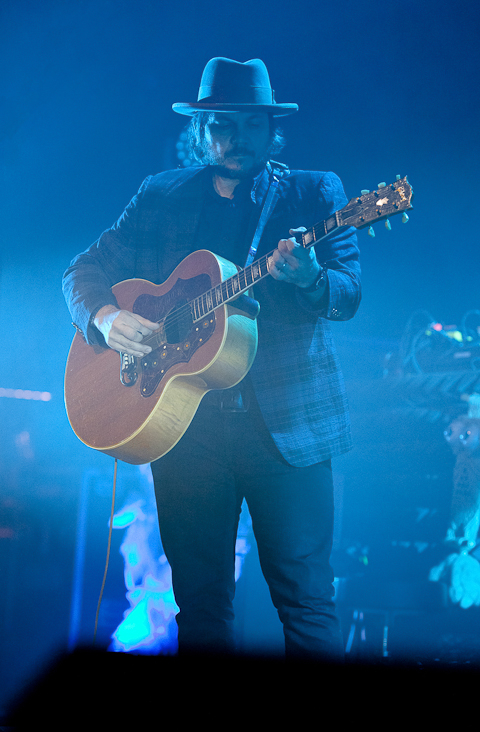 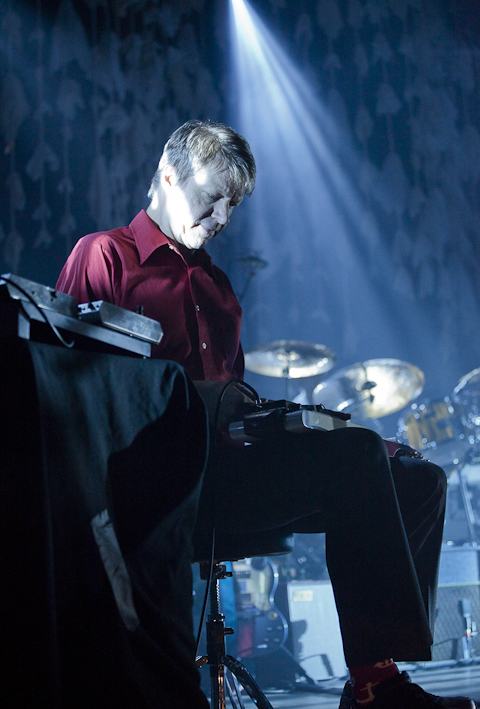 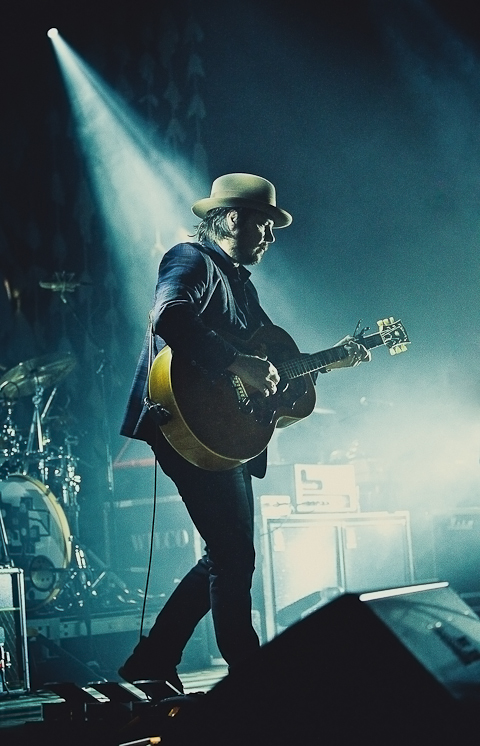 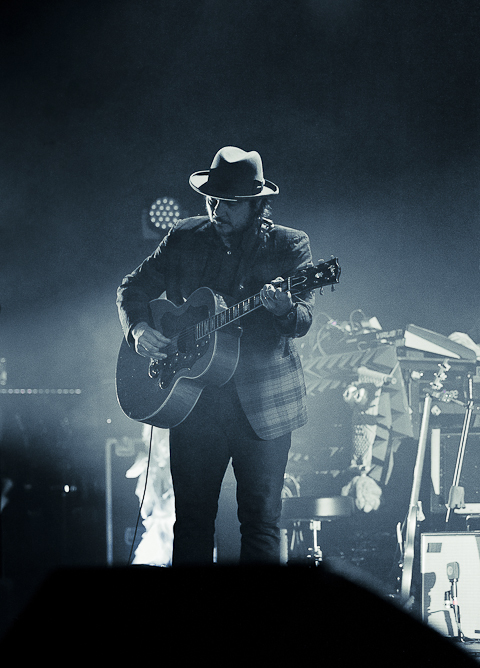 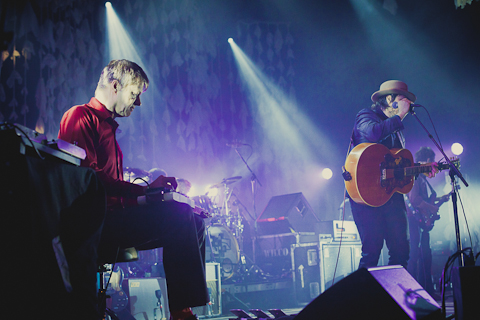